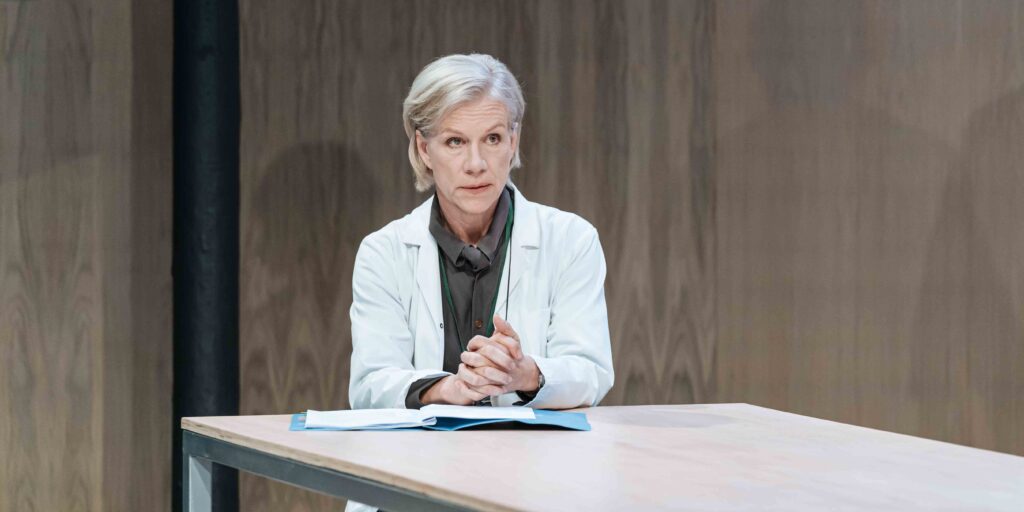 In a divisive time, in a divided nation, a society takes sides.

Robert Icke’s The Doctor opened in August 2019 at the Almeida Theatre in London to critical acclaim, the play was due for a West End transfer in 2020 before the pandemic struck and put all plans on hold. Now, the production, led, starring once again by Olivier Award winner Juliet Stevenson CBE, is destined to open at the Duke of York Theatre at the end of September but not before a short tour which opened at the Theatre Royal Brighton this week (what a coup!) followed by Bath and Richmond.

The Doctor is adapted by Icke from Arthur Schnitzler’s novel Professor Bernhardi, he also directed the piece in his third collaboration with Juliet Stevenson as she reprises her role as Professor Ruth Wolff (two f’s).


Professor Wolff is an expert in the field of dementia working at the privately funded Elizabeth Institute. She is dynamic, headstrong and doesn’t suffer fools gladly. She lives and breathes knowledge, language and medicine and doesn’t think that gender, race, colour, sexual orientation should be of any importance. When an incident at the hospital gets out of hand, she finds herself on the wrong side of public opinion, as the internet stokes the situation, before long she is public enemy number one and the institute risks losing its finding over the bad publicity. There are choices to be made, does she stand up for what she believes, or does she apologise and try and smooth things over? Trouble is, she is unsure what she should apologise for. Was she truly unbiased or did a subconscious prejudice come through?

‘The Doctor’ challenges the audience to look at identity and asks how important is it that these groups keep fighting for their voices to be heard and does today’s cancel culture and ‘woke’ society actually help or harm their cause. It looks at how things blow up on the internet and society can jump to conclusions without knowing or understanding the full story.  The play does this by ingeniously disorientating the audience. At the very beginning you think that an actor has slipped up and used a wrong pronoun, but it soon becomes apparent that genders and colours are completely interchanged. Female actors are playing male roles and white people are playing black etc. What is identity, and should it matter?

This was an extremely clever play and brilliantly executed. Juliet Stevenson gives a powerfully intense performance, spiralling through every emotion. She is supported by a very able cast and high above the stage a drummer, who creates atmosphere and beats as if the heart of the show.

Not the play to see if you want a light evening out and it is a little overlong (not helped by Theatre Royal’s later start time of 7.45pm). However, this should not deter you, The Doctor is a thought-provoking play with hard hitting themes that need discussing. If you do want to see superb theatre. Then book tickets soon!