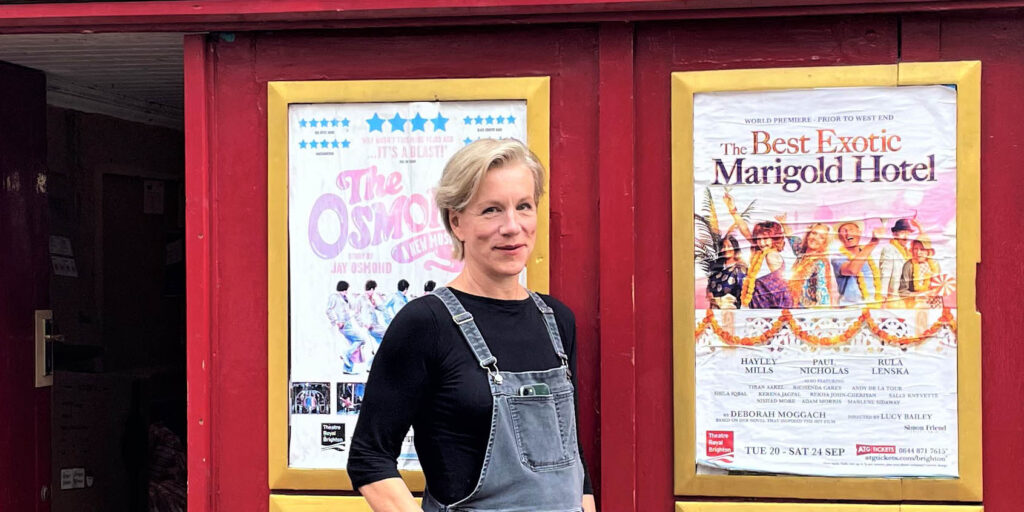 You have collaborated with writer and director Robert Icke previously on Mary Stuart in 2016 and Hamlet in 2017. What drew you back to work with Robert for a third time on The Doctor?

Because I loved working with him. I spotted Rob when he was very young – assistant at the Almeida – and we got talking and I thought he was the most interesting person I’d talked to about theatre in a very long time and I thought he was going to be a great talent if he could walk the walk as well as talk the talk. So, we swapped numbers and then I kept in touch a little bit, then finally when he got to the Almeida as an associate, he asked me to do Mary Stuart and it was a lovely experience. Then we did Hamlet, which confirmed it. So, I very much wanted to work with him a third time, for me collaborations are the most important thing – who I work with is more important than what I work on. If you have a very good relationship with your director and fellow actors, you can really make something brilliant. You might get a wonderful play, but if you don’t get on or click with the director it’s a frustrating experience. I felt with Rob, we are making the kind of theatre I’d longed to make for ages and he’s very dynamic and is interested in making plays for right now, which I am too. So, he wrote The Doctor for me to do, with him, which is lovely. He asked me to commit to a slot in the Almeida programme and I did, and he wrote this for me to do with him. It’s been going on for a while now, this collaboration.

The Doctor received its world premiere at London’s Almeida Theatre in 2019 but its planned transfer to the West End was sadly cancelled due to the pandemic in 2020.

What does it mean to you that The Doctor will now reach a wider audience through its three tour UK dates and West End run this autumn?

I am really thrilled we’re getting to do this play again. We weren’t sure it would reach a wider audience when lockdown arrived and cancelled the first West End run. I’m thrilled we’re getting the chance to reach audiences all over the country. I’m delighted it has a tour as well. It’s so urgently needed. It offers a debate about the fierce culture we’re living in at the moment, about cancel culture, identity politics and the echo chamber that is social media and warring of different identity groups, the kangaroo courts set up on twitter – it’s partly all those forces we’re dealing with in the world but in the safety of a theatre. Theatre is a place you can do that, you can look at dangerous and difficult subjects, knowing it’s just a play, but recognising the complexities we must deal with in our daily lives.

It’s funny, it’s clever, it’s exciting and there is a thriller element to it. It’s an amazing psychological study, it’s an amazing central role for a woman, and an older woman – my age! Women rarely get to see older women telling their experience on a stage. There is lots of reasons I’m excited its’ going to get seen by audiences around the country.

Can you tell us about the role you play in The Doctor?

The role I play is Professor Ruth Wolfe. She’s a senior consultant in the world of neurological medicine – she’s founded an institute to research into Alzheimer’s and dementia, working on finding a cure. She’s a woman who has risen to the top of her field, and it’s twice as hard for women to reach that height, as it is in many professions – much harder than a man. She’s really had to work and slog and prove herself in a world that’s sometimes hostile. She’s quite fierce and brooks no opposition. She doesn’t suffer fools gladly and has a reputation for being a tough cookie to negotiate with. However, she is as tough on herself as she is on her colleagues and has very high standards. She has a pure idea that medicine is a science in itself and doesn’t have to reflect the rest of the world in terms of it doesn’t matter what race, colour, sexual orientation you are; the only thing that matters is medicine. She finds negotiating the current world quite difficult and therefore she gets into trouble when this incident takes place at the beginning of the play, which then goes viral, and several different factions get hold of it and start warring over it in social media and the press. She becomes the focus of a huge national hate campaign, and it’s how she copes and doesn’t cope with that. There is a personal story that goes on and that threads in and out of that, so you see her at home, you see her at the hospital and then you follow this catastrophic destruction of her life and work

The Doctor received rave reviews from audiences and critics when it was first staged at the Almeida Theatre. Why do you think it resonated so strongly?

It speaks to a lot of things we’re worried about and concerned about and feel intimidated by in society; tyranny of social media and instant judgements, kangaroo courts. It’s difficult to challenge and talk about how painful and difficult it is without getting into trouble. It’s very under our skin at the moment but speaks to it in the safety of a theatre and in a very brilliant format. I think it’s extremely contemporary, it’s bold, it looks at all those things in a strong light. It looks at all those issues under a microscope, and really looks at them in detail with all their complexity and more importantly it doesn’t take sides. It’s one of its (the play’s) strong points, you can come to it from any point of view, and you will see yourself reflected there but also be asked to engage in other points of view.

Some of the cast from the Almeida run are reprising their roles, like yourself, and there are six new cast members joining the company for the 2022 production.

How have rehearsals been going, integrating the new cast members?

It’s been a joy! We have a wonderful collection of new actors joining the production and it’s fantastic. We have our core team who were there originally, so we have that history of having worked together previously and it’s a very close company. Then we have this wonderful oxygen coming in with new actors with new experiences into the room. So, it’s a really exciting blend of those of us who have built up a family, as it were, in this company, with this play at the Almeida and in Australia at the Adelaide Festival, where we headlined; but we’ve also got these wonderful new actors asking new questions and keeping us on our toes. We have, as much as we could, gone back to the drawing board to look at it (the play) again in some ways. So hopefully we take the strength of the original production but also have significant changes. It’s been really, really exciting.

What do you hope audiences who come to see The Doctor in Brighton will take away from it?

This is never something an actor can answer because audience members will take from it whatever they will. I can’t predict that, but I think they’ll feel, I hope, as they did before – that they’ve gone to a really clever, intelligent sparkling piece of theatre that is addressing questions that urgently need looking at and doing that with a lot of sophistication and complexity.

After the closure of theatres during the pandemic, what does it mean to you to perform in front of live audiences again?

I’m thrilled to be back on a stage. At my lowest point in lockdown I thought, “I’m not sure theatres will survive this.” There was a lot of talk about that, will theatre ever find itself again? Will it ever open up? We were one of the last industries to open up after lockdown and what form will it take? Will the public feel safe enough to go back in? I thought I was in some sort of mourning in lockdown. So, I’m so excited to be back on a stage with live audiences! I had that experience in Amsterdam with a one woman show earlier this year, so it’s not my first return to live theatre but I’m excited to bring this show to live audiences. For me, simply, there is nothing better than live theatre and that wonderful nightly engagement and conversation with fresh audiences every night – that’s the best thing.

What are you looking forward to most about coming to Brighton this September?

Do you have any special memories about the city?

I’m really delighted that Brighton is our first touring venue, it’s not a town I know well. I have sometimes dipped here down briefly to do work with the lovely audio studio at Pier Productions in Brighton, but that’s been my only relationship with the town. So I am very excited to have just arrived and have twelve days to explore – I’ve already started wondering around when we finish work at night and I’m just loving the sea and the architecture, and these amazing, funky, interesting little lanes and corners and beautiful vistas. And I’ve never played at Theatre Royal Brighton before. I love notching up a new theatre to my belt! I don’t often find one these days after being around a long time. It’s beautiful, so beautiful – I love it front and back. This beautiful, Victorian, warm space to play in and love the backstage, sort of, ‘shabby-chic’ life and rooms, it’s really lovely. So I’m excited, too, for the audiences here who I imagine will be very lively, hungry, engaged and responsive to this play. So I’m very thrilled to be here and looking forward to having that conversation with Brighton audiences.