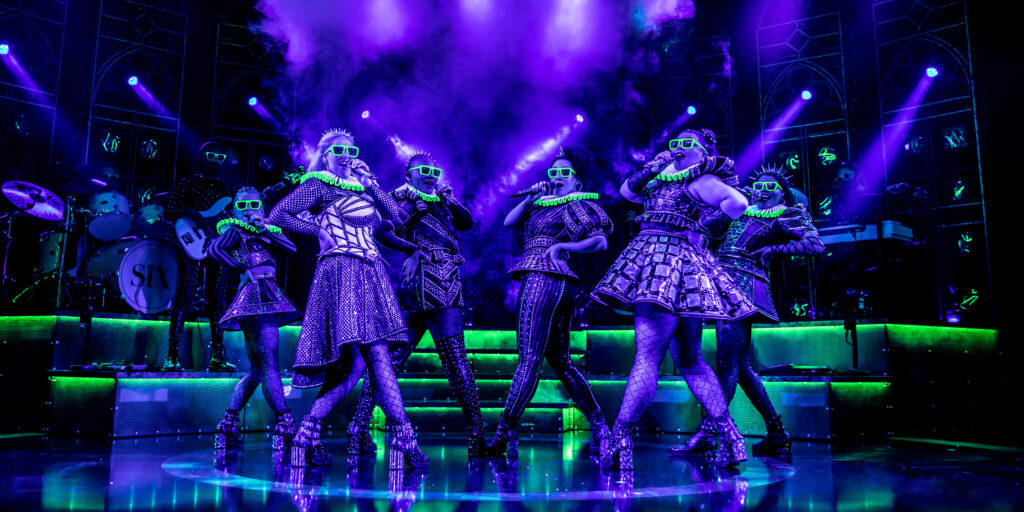 Will this show ever stop growing? From its humble beginnings at the Edinburg Festival ‘Six the Musical’ keeps on gaining momentum and is now one of the West End’s huge success stories.

The brainchild of University Students Lucy Moss and Toby Marlow, the premise is simple but astonishingly unique… the wives of Henry VII come together to discuss / compete to see which of them put up with the most *BS from their husband, probably the most famous monarch in history. Change history to ‘herstory’ as the six wives tell their stories in their own words. Add catchy and upbeat contemporary music and a lot of humour and you are left with the most fun (and accurate) history lesson you will ever have.

During the next 75minutes (no interval) each wife takes her turn to tell her story. These are women who were strong, abused, manipulated and in two cases beheaded. But who took the most grief?

Was it Catherine of Aragon, wed to Henry for 24years until he left her for his mistress and broke union with the Catholic Church? Was it probably the most famous wife of all, Anne Boleyn who’s flirting with royalty got her more than she bargained for? Could the most hard done to Queen be Jane Seymour who was the queen who bore him the son he had longed for who tragically died soon after the birth or Anne of Cleeves who was divorced days after their marriage because didn’t match the flattering portrait (profile pic) than Hans Holbein had painted. Naive Katherine Howard was manipulated from a very young age, did she ever stand and chance? Yet it is Katherine Parr the queen who outlived Henry who challenges the other queens to consider what their lives would have been like without him.

Jarnéia Richard-Noel (Aragon), Courtney Bowman (Boleyn), Collette Guitart (Seymour), Cherelle Jay (Cleves), Sophie Isaacs (Howard) and Hana Stewart (Parr) were the Queens the night of this review, each bringing their own slant and personalities to the roles. Even if you have seen Six before, it is worth seeing it again.

Having looked at history from a completely different perspective, audiences come away from ‘Six the Musical’ more knowledgeable and with a lot more respect for


Move over Spice Girls, this is Girl Power at its best – The Six Queens are ruling the West End and will be for a long time to come.