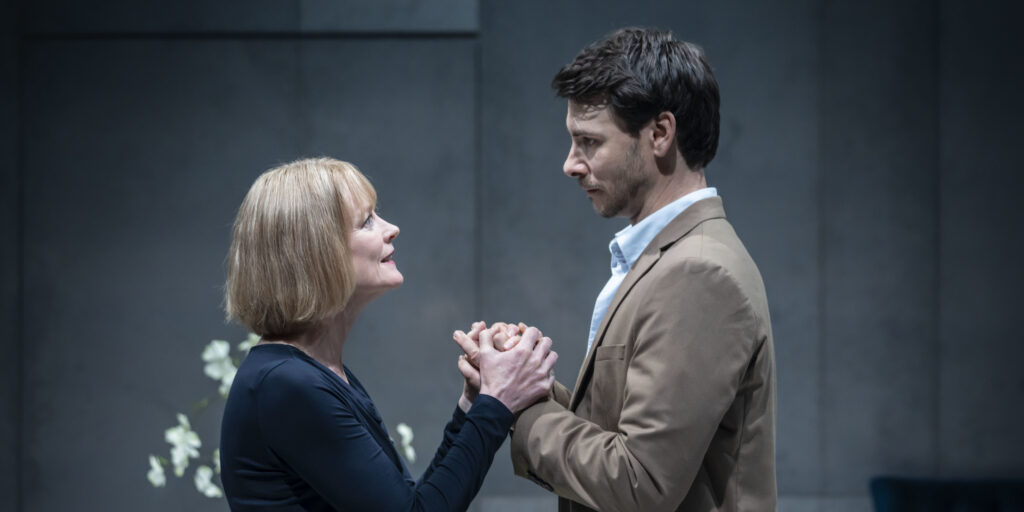 This long anticipated play from American playwright Christopher Shinn should have come to the stage in 2020, delayed until now due to the arrival of the global pandemic. After two years his wonderful production (with a few revisions) has finally arrived at Chichester and definitely worth the wait. Set during 2017 almost a year following the Trump election, it has a backdrop of US politics and the power play pressures of that year. However the play’s concurrent main theme is also that of modern day communications on a personal level, and the individual pressures they bring.

First of all, let me congratulate all the actors, not only on their outstanding performances, but their American accents were spot on (I’m no expert, but they sounded pretty authentic to me). I was utterly convinced by their characterisations throughout, and the dialogue was pretty meaty.

The central character Jim (Harry Lloyd) is a disillusioned political consultant following the Trump/Clinton debacle of 2016, disillusioned with the fact his advice was ignored, disillusioned with the ‘new vision’ for the US by the incumbent president, and disillusioned with his life. He has more or less given up on his political career. Then out of the blue comes a summons from a feisty, straight talking senator – political allegiance never really made clear – who is impressed by his history and abilities and seeks to recruit him as her own personal advisor. (The senator is beautifully played by Claire Skinner, well known to TV pundits for her role in ‘Outnumbered’ as Hugh Dennis’s ‘wife’).

Jim resists the call vigorously, he really doesn’t want to return to that life, he just has too much going on in his new one. His marriage is on the rocks, he’s co-writing a book with Kara (Paksie Vernon), who clearly relies on his total co-operation and commitment, plus he has an emotionally demanding mother who uses him as a crutch. Not only all the above but Jim also wrestles with his sexual identity, demonstrated in a strong and really quite poignant scene when he invites a waiter (Stuart Thompson). who he met at a cocktail soirée, back to his flat. As if that weren’t enough his brother, who has not been a part of Jim’s life for a while, overdoses on opioids. Phew.

Poor Jim is pushed and pulled in every direction by all these people, and their own issues. Underpinning these themes is the use of that ubiquitous device, the mobile ‘phone. Texting ….. the addictive bane of the 21st century. This is the way Jim is constantly distracted, gradually crumbling under the pressure of attempting to be everything to everyone but never managing to pull it all together. It’s all so cleverly demonstrated by the inventive set design – players being lit in double decker ‘pods’ behind Jim, and text conversations taking place in the form of miniature soliloquies. When the play opened, it took me a couple of minutes to figure it out, however as it progressed I appreciated just how effectively it worked. Brilliant job by the set designer Jasmine Swan! Also I really liked the use of the circular swivel section of the stage enabling a swift move to a different scene in a different location.

We feel for Jim, he has become a victim – like so many of us in modern times – of the demands on him via the one-time innocuous little text message, now morphed into the beast in the room. But, wait for it, he DOES turn his ‘phone off once – with regrettable consequences.

I enjoyed this innovative and unique play enormously, not least because it juggled so many different themes whilst always staying faithful to its message. We live in stressful ever changing and unsettled times, and Christopher Shinn’s play brings it home to us in a way that is equally unsettling, giving much opportunity for thought. He has tweaked it a little to reflect the current political climate, and that of Jim’s conviction that the bright future and immediate seismic change for the better that all new governments have historically convinced us they will bring, may be showing an inclination to a view that ‘say-it-like-it-is’ campaign speeches may present the future in a more realistic and credible light. Pretty topical.

I really recommend this wonderful play not least because, although it addresses serious issues, is funny and witty and has laugh-out-loud moments delivered with fine-tuned timing by the stellar cast.