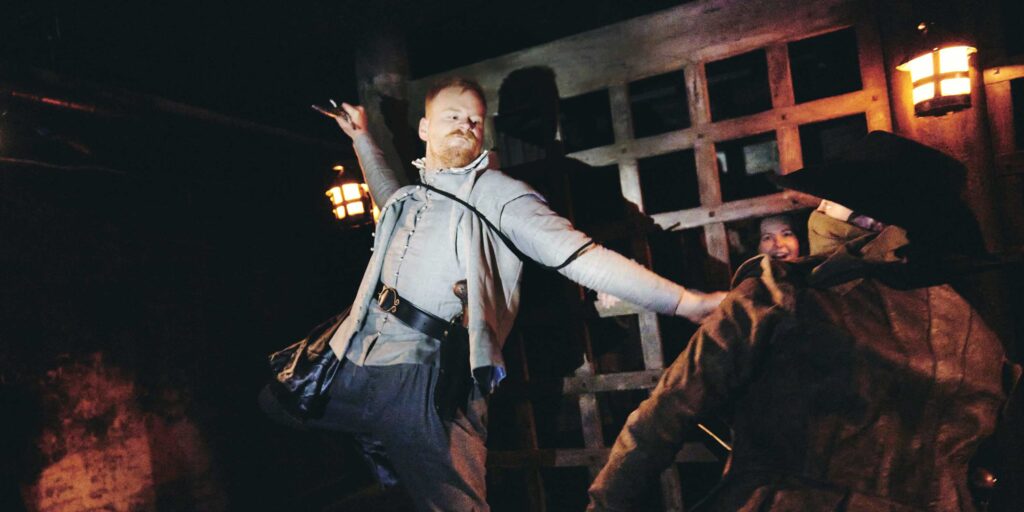 The Gunpowder Plot
The Tower of London UNESCO Heritage Site

Step inside history’s most daring conspiracy
London, 1605. A city divided. The fuse of rebellion is lit. The peace of the nation balances on a knife edge…
Step into a world where spies and informants hide in every shadow.
Your mission is to go undercover and unmask the mysterious figures behind history’s most infamous plot.
But when you’re surrounded by ‘traitors’ who can you trust?

The Gunpowder Plot is one of the best immersive experiences currently available in London. Held at the Tower of London UNESCO Heritage Site, underground in the Tower Vaults, the show whirls you away into the year of 1605 for 2 thrilling hours. The Gunpowder Plot is absolutely unmissable, truly unique in many aspects, and whilst I have been to my fair share of immersive experience, this one I highly recommend.

The Gunpowder Plot experience is exceptionally successful in its blend of live theatre and the latest digital technology to provide guests with complete 360 immersion. There are many technological aspects embedded in the show run, but the hero moments include a phenomenal display of projection mapping, and 3 sets of outstanding VR content.

The projection mapping room was an enchanting experience; the art style of the animations was incredibly captivating, and [SPOILER] the air blasts and seat shakers took me quite by surprise.

The projection mapping room, as well as each of the VR rooms, considered not only how one would experience the digital world, but also created fantastic sets for users to absorb prior and post headset-use. [SPOILER] The swing sets provided such a high level of immersion for the tower escape sequence; my fear of heights was certainly convinced of the realism!

Unfortunately, the headset I had for the second VR content set was broken in a few places, meaning I couldn’t view the content as clearly as others’ could. There was no staff member in the room at the time to assist, so I manually held the visor to my face instead, which was considerably less immersive! Nonetheless, I do appreciate these sorts of problems are relatively unavoidable when incorporating specialist tech into experiences with a quick turnover of users.

Overall, The Gunpowder Plot does a marvellous job of using digital technology to tell a story. The tech was very smoothly integrated, never feeling like a forced inclusion, and it was clear everyone found it exciting every time. VR and Filmed Content Director, Simon Reveley, and Production Designer, Tim McQuillen-Wright, definitely both deserve acclamation for their contributions.

Live theatre is commonly used within immersive experiences, but The Gunpowder Plot was particularly masterful in weaving live theatre into the production. Throughout the show you meet an eclectic group of characters, who expertly guide the attendees through the world of 1605, portraying the catholics plotting against parliament, but also (interestingly and unexpectedly) the protestants who wished to uncover the Plot, and prevent catastrophe. Ahead of the experience, I had anticipated being immersed as part of the former, but the inclusion of the latter hadn’t occurred to me as a potential story route.

The actors were all brilliantly compelling to watch, and interact with. Toby Pavitt, playing ‘Thomas’, was a firm favourite; he reminded me very much of a mix of Doctor Who Matt Smith, and Peaky Blinders Arthur Shelby. The Priest character too, had me highly engaged, and later, genuinely concerned for his welfare.

[SPOILER] Whilst I did enjoy the digital ‘star’ casting of Tom Felton as Guy Fawkes, I think this may have more so come from a place of Harry Potter nostalgia and it slightly hindered the show, as this meant any the ‘live’ Guy Fawkes could only be portrayed by an actor with their face concealed. Additionally, ‘Ghost Guy Fawkes’ in the last VR segment felt very insipid; to me, it undermined the gritty realism offered by the other actors earlier within the production.

Nonetheless, the quality of the live theatre was remarkable, and I cannot begin to imagine the absolute work of art that the casting rotation schedule must be!

Not only was the rotation of the cast incredibly smooth, but the whole run of the show felt seamless and well-paced. Each scene effortlessly transitioned into the next, even when moving between the tech-led moments, and the live theatre. The audience felt consistently involved, especially with the frequently given responsibilities e.g. opening doors, carrying lanterns, writing codes etc. I never once felt unnecessarily rushed, as even in moments of quick movement, the attribution to this to ‘the guards are coming!’ and other such phrases felt entirely natural for the storyline, and only furthered the immersion.

There are only three drawbacks to the run of the show I would touch upon. Firstly, the first room of the experience felt very clunky in flow; the explanation of the historical background is key to get across to guests, but the map we stood around was not in any way referenced to, nor was there anything to hold onto or do, and this led to a feeling of awkwardness in the space. Secondly, occasionally you are left in rooms alone by the live actors without instructions, and this again led to some awkwardness and general confusion; someone even tried to yank open a staff-only door in thinking ‘we need to find a way out by ourselves’. Thirdly, there were two young children with my group, who became incredibly over-excitable and plainly disruptive at times, visibly irritating the actors and others’ in my group; personally I believe the 12+ age limit should be raised to at least 16+, even if only for the ease for the actors!

In conclusion, I believe The Gunpowder Plot to be a serious contender in the London immersive experience scene. An adventure that truly throws you into the midst of the Gunpowder Plot, presenting perspectives previously unconsidered, and moral dilemmas that overshadow even the Trolley Problem! Creative Director Hannah Price, Writer Danny Robins, and Associate Director Rosie Jones, have created a marvellous production that is unforgettable in every way.  Tickets are on-sale now; £40-50 for a standard ticket, or £90-110 for VIP treatment inclusive of food, drink, merch and photos.

Is Guy Fawkes a villain or hero? You decide. Trust no-one.