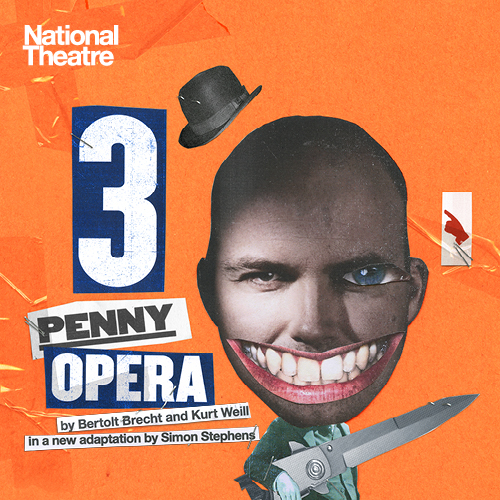 Last night, myself and a group of fellow Theatre Bloggers were invited to see the National Theatre’s production of ‘The Threepenny Opera’, written back in 1920s Germany by Bertolt Brecht with music by Kurt Weill.

This production at the National is a new translation by Simon Stephens and directed by National Theatre Director Rufus Norris. It is described as a bold new production, containing filthy language and immoral behaviour but other than that I had no idea what to expect. Not being familiar with The Threepenny Opera or indeed The Beggar’s Opera on which it is based. I went in with no preconceptions and was surprised and overwhelmed by the intensity of the piece and came out with my head spinning.

Set in bleak East End London prior to the Coronation of Queen Victoria, we meet a band of beggars and thieves being trained and equipped by Mr Peacham who is a rather rambunctious grotesque version of Oliver Twist’s Fagin. When Peacham and his wife realise that their intelligent yet dowdy daughter Polly has married Captain Macheath, a notorious murdering, thieving, womaniser also known as ‘Mack the Knife’ they are not best pleased. 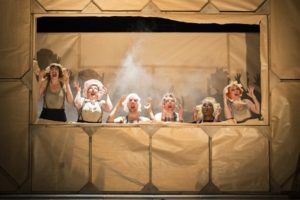 Macheath has been protected from the law for years by his army friend Tiger Brown who now happens to be the chief of police but even Brown’s support wavers when Macheath pushes the limits of their friendship too far.

Although laced with humour throughout, this is a dark piece which challenges the audience to evaluate their attitude towards morality. It suggests that life is simply a case of the survival of the fittest and there is a very thin line between what is right and wrong. Full of lecherous and immoral characters using persistently shocking language The Threepenny Opera questions whether they are as depraved as they seem or a product of the society they are in.

Vicki Mortimer’s set design seems at first very basic, there is a giant turntable, strewn with wooden frames covered in paper which are frequently torn apart and moved about, to create different settings. This means that the focus is where is should be, on the actors and the play itself. As the cast clamber around the stage it affirms that we are in an unpredictable world where boundaries and ideas change. 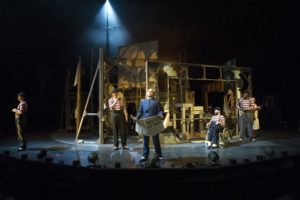 Rory Kinnear plays Mack the Knife, the villainous Macheath, he does an excellent job of seeming emotionless and amoral, but yet gets under your skin. Rosalie Craig portrays a feisty, intelligent Polly Peachum who marries Mack and her devotion never wavers despite his quick return to his lascivious ways.

I really enjoyed the performances of Nick Holder and Haydn Gwynne as the mismatched Peachums, Holder gaining the majority of the big laughs with his quips and nuances whilst Gywnne adorned in a striking scarlet dress plays the pragmatic and scheming Mrs Peachum with aplomb.

The most recognisable number in The Threepenny Opera is ‘Mack the Knife’ which opens the show. Forget Robbie Williams and Louis Armstrong’s big band swing versions; here George Ikediashi playing the Balladeer introduces Macheath backed by 8 onstage musicians. There were some fabulous numbers particularly the ones sung by Rosalie Craig although a few are lengthy and seem deliberately disjointed making it difficult to follow the lyrics.

This production of The Threepenny Opera certainly confused me, I am still not sure whether I was meant to like it or not, it made me feel strangely uncomfortable and yet bizarrely liberated which  I think was all part of Becht’s ultimate plan.

Don’t take my word for it – read some more reviews coming soon to TheatreBloggers.co.uk