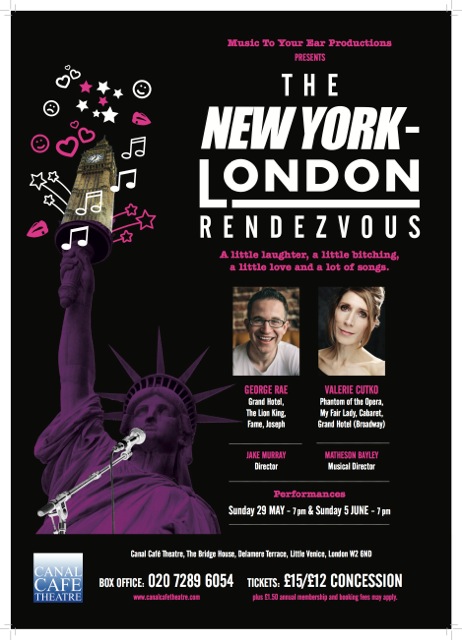 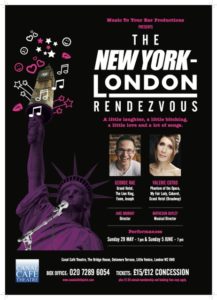 There is a delightfully charming evening’s entertainment taking place at the beautifully intimate Canal Cafe Theatre. The New York – London Rendezvous promises a cabaret style show with a little laughter, a little bitching, a little love and a lot of songs.

Every year two friends George (George Rae) and Valerie (Valerie Cutko) meet on the same day in one of two of their favourite cities to catch up and reminisce over old times. One year it’s London, the next New York, then London, then New York and so on. This year the rendezvous is in London.

There is no doubting the vocal talents of Rae and Cutko who both have a enviable list of West End credits. Rae actually screams out to be cast as Seymour in Little Shop of Horrors and Cutko could take on any leading role. Individually they deliver stellar performances belting out songs such as A Foggy Day, We’ll Take A Glass Together, He Touched Me, Rose’s Turn amongst many others, but they also have a terrific chemistry together when engaging in their little moments of dialogue. There are a couple of issues that are addressed, Valerie has a major career setback and George has never really overcome a family bereavement but the dialogue is brief and really just allows for a transition to the next song. It all works perfectly and allows the show to seamlessly take us on their journey as ‘friends’.

Rae and Cutko are ably assisted by musical director Matheson Bayley who belts out tune after tune. (Ironically and to his credit I didn’t see one piece of sheet music!)

The New York – London Rendezvous which is directed by Jake Murray with choreography by Owen Smith delivers its promise to provide a perfectly balanced evening’s entertainment.

If you are looking to be entertained get yourself to the Canal Cafe next Sunday, book early as this Sunday was sold out.