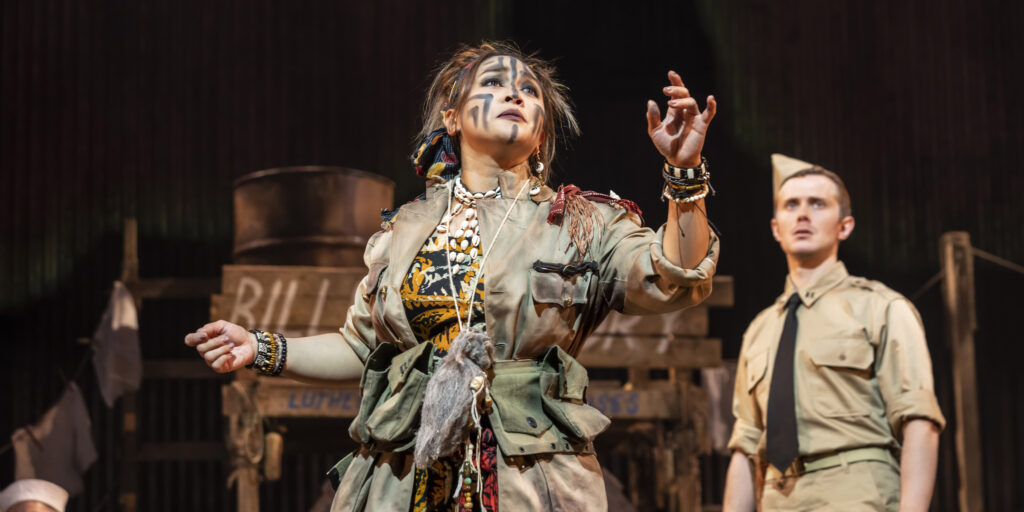 Lyrics sung by Lieu. Joe Cable in the musical South Pacific, which opened this week at Sadler’s Wells.

Once again, a Chichester Festival Theatre summer musical has made it to the West End, this time prior to a UK tour (high hopes for this year’s Crazy for You).  Originally due for the 2020 season it was eventually staged in Chichester in in summer of 2021. It was rehearsed in masks with social distancing and strict daily testing and as a result ran the entire season without missing a single performance. Thankfully now, things are a little more relaxed helped by Sadler’s Wells being a lovely spacious, airy, modern theatre.

South Pacific was written by Richard Rodgers and Oscar Hammerstein II, who were never afraid to confront difficult subjects in their work including abuse, Nazi Germany, polygamy and more. This was also not the first time that Hammerstein had written a show challenging racism head on, he also wrote Showboat in the 20s collaborating with Jerome Kern.

Set during the second World War on a Polynesian island in the South Pacific, the US Navy are stationed to keep an eye on Japanese activity. Nurse Nellie Forbush (Gina Beck) falls for French Plantation owner Emile de Becque (Julian Ovenden) and despite her misgivings that she doesn’t know him that well, imagines her future life with him. When he tells her that he killed a man she readily forgives him, but when she finds out he had a previous relationship with a Polynesian woman that resulted in two children weirdly this is a step too far.

Meanwhile the troops are dreaming about girls back home and the girls on the neighbouring island Bali Ha’i. Sassy indigenous entrepreneur Bloody Mary (Joanna Ampil) encourages Lieu. Joe Cable (Rob Houchen) to travel to Bali Ha’i to meet her beautiful daughter Liat (Sera Maehara). When Joe and Liat embark on their relationship, the fact that she is ‘Younger than Springtime’ is uncomfortably glossed over and it is only when racism rears its ugly head again that the relationship is questioned.

There is much to admire about Daniel Evans’ production, the opening where the stark contrast of the beauty of the island being overrun and violated by the arrival of the GIs is beautifully portrayed helped by Peter McKintosh’s set represents either a corrugated army camp and a Polynesian island depending clever lighting (lighting design: Howard Harrison) sets the scene for one of the most exciting revivals I have seen for a long time.

South Pacific is rammed packed with familiar songs, they feel as comfortable as slippers executed brilliantly by the entire cast. There are relatively few big ensemble numbers notably ‘There is nothing like a Dame’, ‘I’m gonna wash that man right outa my hair’ and ‘Bloody Mary’ but it was the solos and duets that really stood out. Despite being on the mammoth Sadler’s Wells stage, Beck, Ovenden, Houchen and Ampil raise the roof with their pitch perfect vocals.

South Pacific is a joy to watch. If you are looking for a well constructed, beautifully orchestrated, traditional musical then this is definitely the one to see.