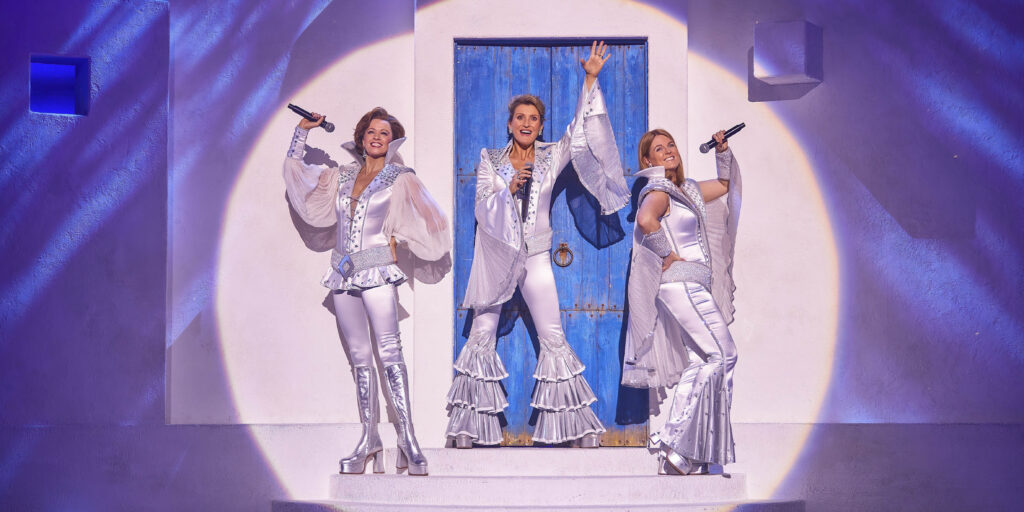 Abba may have been at the top of their game in the 1970s but there is no better or easier time to enjoy their music. They are a key element of every 70s/80s revival event, there is Mamma Mia the party (a complete dining/party experience) or Abba Voyage (an Abba via avatar experience in a purpose built arena). But is it Judy Craymer’s musical which opened in the West End nearly 25years ago, before conquering the world and becoming a box office smash that continues to bring the joy of Abba’s music to generation after generation.

Now on a Nationwide tour, it wasn’t that long ago that Mamma Mia! The musical played at the Congress Theatre in Eastbourne. This week it is packing houses at the cavernous Brighton Centre just down the road.

Those who have only seen the film which makes use of stunning Greek scenery may be surprised at Mark Thompson’s simply designed set, a taverna in two pieces which the cast revolve and cleverly lit by Howard Harrison to create different settings.

The simplicity of the design enables to cast to shine, and they do!  It was wonderful to hear the full sized orchestra strike up the overture of familiar songs and immerse into the now familiar story (if you haven’t seen Mamma Mia the movie, where have you been?) of a young girl, Sophie, on the eve of her wedding trying to work out which of three men is her father.

Sophie is played by relative newcomer Jena Pandya and she really excelled, particularly in her scenes with Sara Poyzer who was playing her mother Donna. Their vocals were incredible and very moving (yes I shed a tear AGAIN during ‘Slipping through my fingers). The power of the cast’s vocals was the key to performing at the Brighton Centre, I didn’t feel the physical connection between Sophie and her fiancé Sky (Toby Miles) but that was more due to the huge size of the venue rather than their lack of intimacy or talent.

Each and every one of the supporting cast were en pointe as well. The ‘prospective’ Dads, Richard Standing (Sam), Daniel Crowder (Harry) and Phil Corbitt (Bill), Donna’s friends, Tanya (Helen Anker) and Rosie (Nicky Swift) and Sophy’s confidants Ali (Jasmine Shen) and Lisa (Mariella Mazzilli) all brought energy, humour and passion to their roles, giving the audience exactly what they expect from this vivacious show and more.

And the music, the music – need I say more? Benny Andersson and Bjorn Ulvaeus’ music just gives and gives. We are treated to even more of Abba’s music than in the film and it is one of the only ‘Jukebox Musicals’ where songs slide effortlessly and are not shoehorned into the storyline. It is as if the songs were written for the show rather than the other way round.

Originally directed by Phyllida Lloyd back in 1999, Mamma Mia the Musical has certainly stood the test of time and will continue to delight audiences for many years yet.