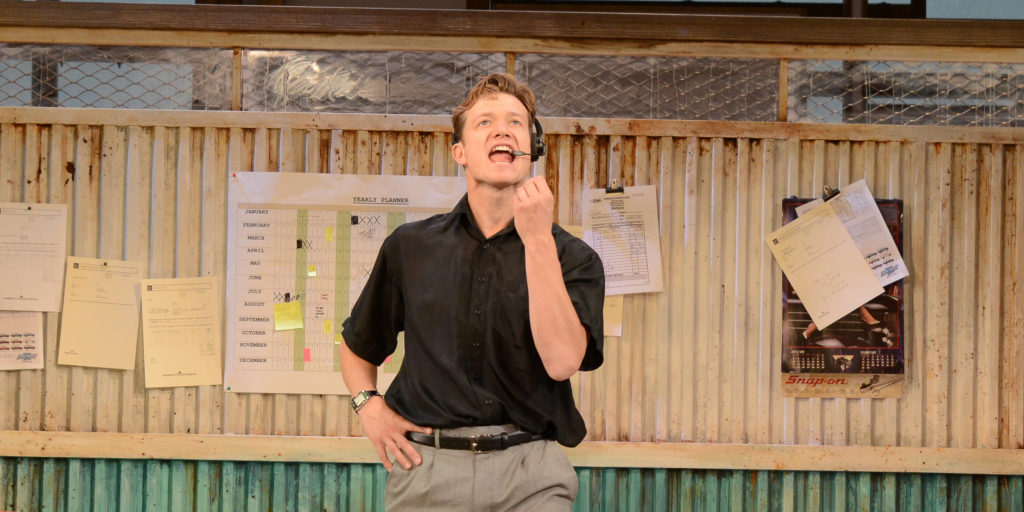 Former Downton Abbey star Ed Speleers talks to us about starring in the stage version of Oscar-winning film Rain Man.

What can you tell us about Rain Man?

It’s a really fun, heartfelt story that will make you laugh, but then, when you’re not expecting it, it will hit you right in the heart. It’s a family story about a man finding himself. He takes a road trip with the autistic brother he’s only just found out exists.

It’s about tolerance and acceptance and understanding. That’s hugely relevant now, as we’re living in a world where we’re all moving further apart.

This play is based on the movie starring Tom Cruise and Dustin Hoffman. Had you seen it?

My mum is a big Tom Cruise fan. I was shown films like Cocktail and Rain Man early on in life, so I was very familiar with it. But we’re trying to keep the film and the play quite separate. If you get too bogged down in the movie, you either feel you need to do imitations or the pressure of its legacy.

Charlie’s hurting. He’s deeply unhappy. I had to ask, “How do you get to be as volatile as he is? What does it take for someone to leave a very comfortable, affluent home at 16?” It’s a lack of love, and it leads to his need for adoration and to prove to the world he’s number 1. There’s fight in him and a showman element too.

You’re making your stage debut in this show. What was it about this production that made you take the plunge?

It’s a juggernaut of a role to debut with, but why not? It spoke to me in so many ways. I’ve always wanted to do stage. How much do you really know about yourself as an actor if you can’t do it live? It was just a case of finding the right piece, and this is definitely the right piece.

How is seeing the story on stage different to watching the movie?

It’s much more visceral. You’re there. You’re present. This show is a brilliant way to see an iconic story. We all have something we connect to in it, whether it be family, autism, acceptance, love, hate, parent relationships. It’s full of universal themes.

Your co-star is Mathew Horne. What’s he like to work with?

He’s absolutely fantastic. What he’s doing with the role of Raymond is really exciting. He’s a very smart man.

Are you excited about touring?

I have a young family who are giving me incredible support, but I can’t wait to get out on the road. I’ve always been quite nomadic. Everywhere has got a different pulse, a different energy. I think it’s interesting to soak up those different cities, understand what those cities and audiences are about, and have fun with them.

Is there anything special you’ll take with you?

My dog’s coming with me. He’s been on lots of sets, but I’ll have to run him to wear him out before the shows because I’m worried there will be a silent moment and the audience will hear barking from backstage.

Is there anywhere you’re particularly looking forward to playing?

Brighton is an old hangout of mine, so I’m looking forward to that week. I went to school in Eastbourne, now I’m going to play the theatre there where I saw Eddie Izzard perform. So those two are exciting because they’re nostalgic.

You played footman Jimmy Kent in Downton Abbey. What was it like working on such a phenomenally successful show?

That was sort of a drama school for me. I had the luxury of being both upstairs and downstairs. Upstairs, I didn’t have a lot to say, but it was a great place to watch because you’d be with Maggie Smith, Hugh Bonneville, Penelope Wilton and Michelle Dockery regularly. If you can’t learn by watching them, you’ll never learn. And if you aren’t watching them, you need to get out of this business.

After Downton Abbey, I seem to be getting more interesting roles. I’m playing an Irish, psychopathic murderer in Outlander next. The thing I find hard about television is unless you’re the lead you’re not always there. I don’t like to sit around doing nothing. I like to work and feel I’m earning my bacon. That’s why this is great. You don’t stop. Especially with this role.

One thought on “Q & A with Ed Speleers | Rain Man”