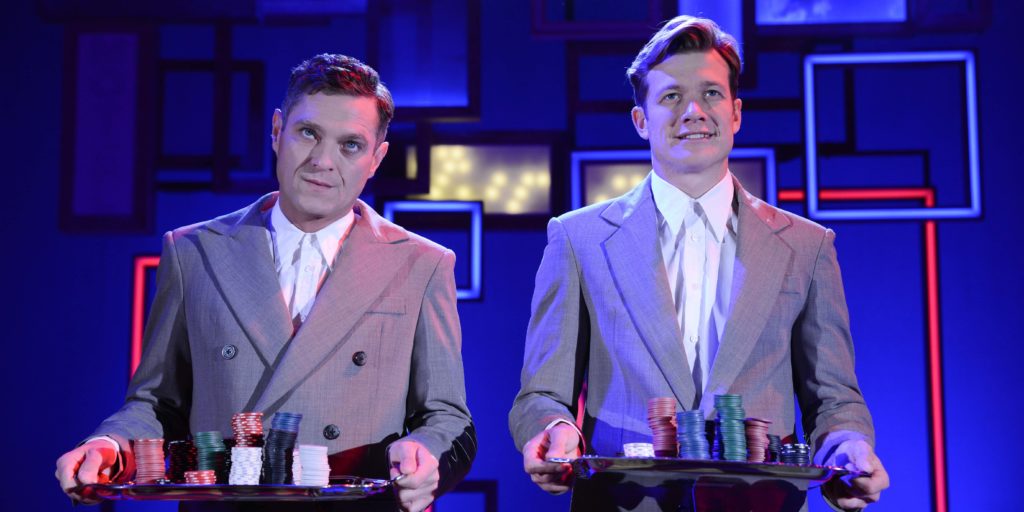 Produced by Bill Kenwright and presented by ‘The Classic Screen to Stage Company’, you would be forgiven to assume that the production of ‘Rain Man’ is just a nostalgia trip heralding the 1988 multi-Oscar winning movie starring Tom Cruise and Dustin Hoffman. The play is currently on a nationwide tour and despite some flaws it is well worth a visit and quite deserved the standing ovation it received at the Theatre Royal Brighton last night.

The story is the journey that two brothers take, both physical (across America) and emotional. Charlie Babbitt (played by Downton Abbey’s Ed Speleers) is a bitter young man with attachment issues that he blames on his recently deceased uncaring father. His business is in financial trouble and he angered to learn that he has lost out on his inheritance to an autistic brother Raymond (Mat Horne) that he didn’t know he had.

Aficionados of the film be warned, although the story is the same, the setting is very different. Instead of a sweeping journey across America in a classic car taking in sights and casinos, here the brothers move from one hotel room to another putting all of the focus on the actors and the dialect.

But that is no bad thing. Where the physical journey fails the emotional journey succeeds.

Making his stage debut Ed Speleers’ transformation between a shouty heartless businessman (a little too shouty in the opening scene where you couldn’t understand a word), to someone desperately trying to understand, bond with and care for his brother was commendable. He maintained a raw yet credible American accent throughout and the chemistry between him and his co-star was convincing.

Mathew Horne’s metamorphosis between comic actor (ala Gavin and Stacy and The Catherine Tate Show) to autistic savant Raymond is jaw-dropping. Never again can he be pigeon-holed into situation comedies. Inspired by his brother who is autistic Mat adopts a more physical role than Hoffman in the film and pulls it off beautifully. It is a phenomenal performance.

Charlie’s girlfriend Susan is played by Elizabeth Carter, no stranger to Kenwright musicals she shows here that she can ably play a much more serious role.

Directed by Jonathan O’Boyle, Rain Man’s strength firmly lies with the actors and they do not disappoint, the relationship between the brothers changes and evolves throughout the play and watch out for the tugging of your heartstrings at the end. Well worth seeing.

Rain Man continues at the Theatre Royal Brighton until Saturday 20th October and then continues on it’s tour.

Tickets for Brighton are available here