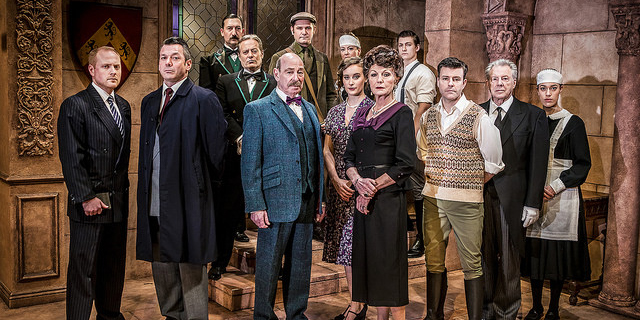 The Case of the Frightened Lady
Connaught Theatre, Worthing
8-15 October 2018

The Case of the Frightened Lady | Review

The action is set in the Gothic entrance Hall of Marks Priory, allowing for lots of household comings and goings from various parts of the stage. The widowed Lady Lebanon , played with refined hauteur by Deborah Grant, is desperately trying to preserve the family line by arranging to have her dim-witted son William marry her impoverished niece Isla , who is also her secretary, to produce an heir. Her plans are disrupted by two murders committed with a weighted red scarf….

Inspector Tanner (John Partridge) (Eastenders and the latest Celebrity Masterchef winner), is called in to investigate, he and his colleague Sergeant Totti quickly discover that nothing at the Manor is what it seems.

There’s a lecherous ‘family doctor’ who lives in Mayfair yet is always on hand at the Priory, has a string of horses, owns a Bentley and seems to have some mysterious hold over the Lady of the house. Adding to the list of characters and suspects is a flighty maid and her jealous gamekeeper husband, two rather suspicious footmen who seem to have the run of the house, the all-knowing head butler and the young Lord Lebanon who seems to need protection from his past life.

It quickly becomes clear that there are some unpleasant secrets within this family, linked to their past involvement in the Indian army, with suspicion falling on different characters in turn whilst Inspector Tanner attempts to unravel the mystery.

This clever play is fast paced and rattles along, keeping us all guessing right to the end. A well-directed and superbly acted classic murder mystery with twists and turns, which leaves the audience speculating whodunnit right from the first dead body found strangled at the annual fancy dress ball…

If you like a good old fashioned whodunnit in true Agatha Christie style then this is an entertaining  evening out.

The Case of the Frightened Lady is being performed at The Connaught Theatre in Worthing until Saturday 15th October. Tickets available here