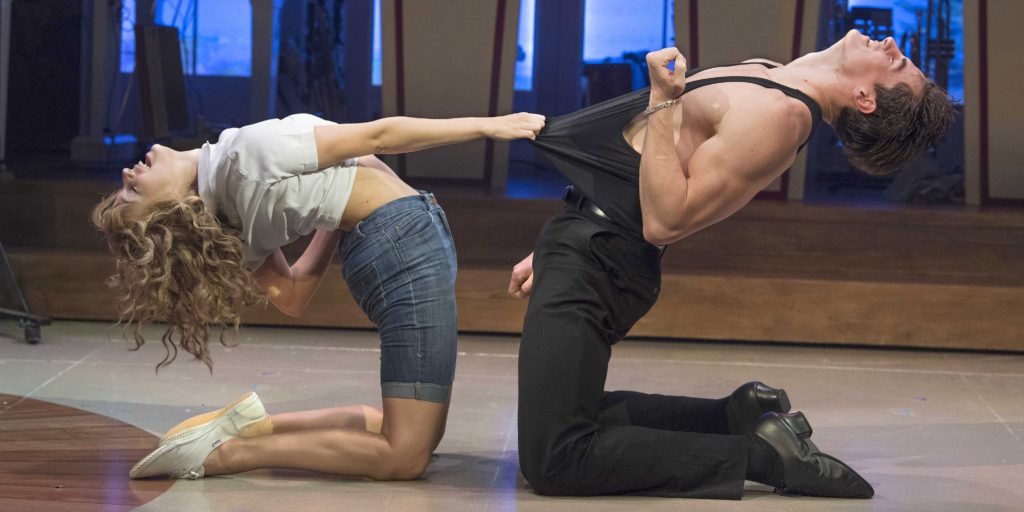 As a show I don’t think there is anything that Dirty Dancing does not have; great dancing obviously, great singing, great music and a storyline that everyone I know knows. The audience were in their element on opening night at Theatre Royal, Brighton; some unashamedly whooping with delight at the scenes, most commonly featuring Michael O’Reilly who played Johnny, featuring raunchy dance moves and semi nakedness. For me he was good but at times it felt as if he was trying a bit too hard to be the Patrick Swayze of the show, that withstanding he portrayed the angry and pent up dancer desperate to make his way from the streets into someone and something good despite his circumstances and relationships with others, well. His dancing was excellent and physic – did I mention the whooping…..?

In contrast Kira Malou, playing Baby, effortlessly captured all the aspects of Baby on her family holiday, finding her first love. But Dirty Dancing is more than just a feel-good love story, there are issues of trust, gratitude, changes in family dynamics and the expectations and aspirations of others that are as true today as they were in the sixties, when the show is set and when the film became a hit.

The set is crammed full giving every detail of Kellerman’s Hotel from the chalet rooms, the main hall and the private staff quarters. There is even the balancing on the tree trunk and the water scene, for that all important lift practice, portrayed. Having such a complex stage gave the ideal platform to show off the main musicians led by Tito (Colin Charles), Kieran Kupers, Ben Mabberley and Miles Russell, all excellent and key to the interaction between the well-known songs (She’s like the wind, I’ve had the time of my life, Do you love me?, Hungry Eyes ) and the dancing. Stand out vocals for me were from Alex Wheeler, playing Billy Kostecki who sang both solo and duet. The dancing was, as predicted full of lifts and precision, with Simone Covele playing Penny, leading the standard for the talented ensemble, who were equally impressive and interchangeable with key characters. No one disappoints in this show.

Everyone in the audience had high expectations of this show, and from the impromptu occasional singalong and smiles all round, especially when those phrases are spoken, they were not disappointed. A standing ovation and a little jig about to the band’s encore completed a great evening out. This is certainly a show where nothing has been left out, leaving the audience with a real feel good factor.