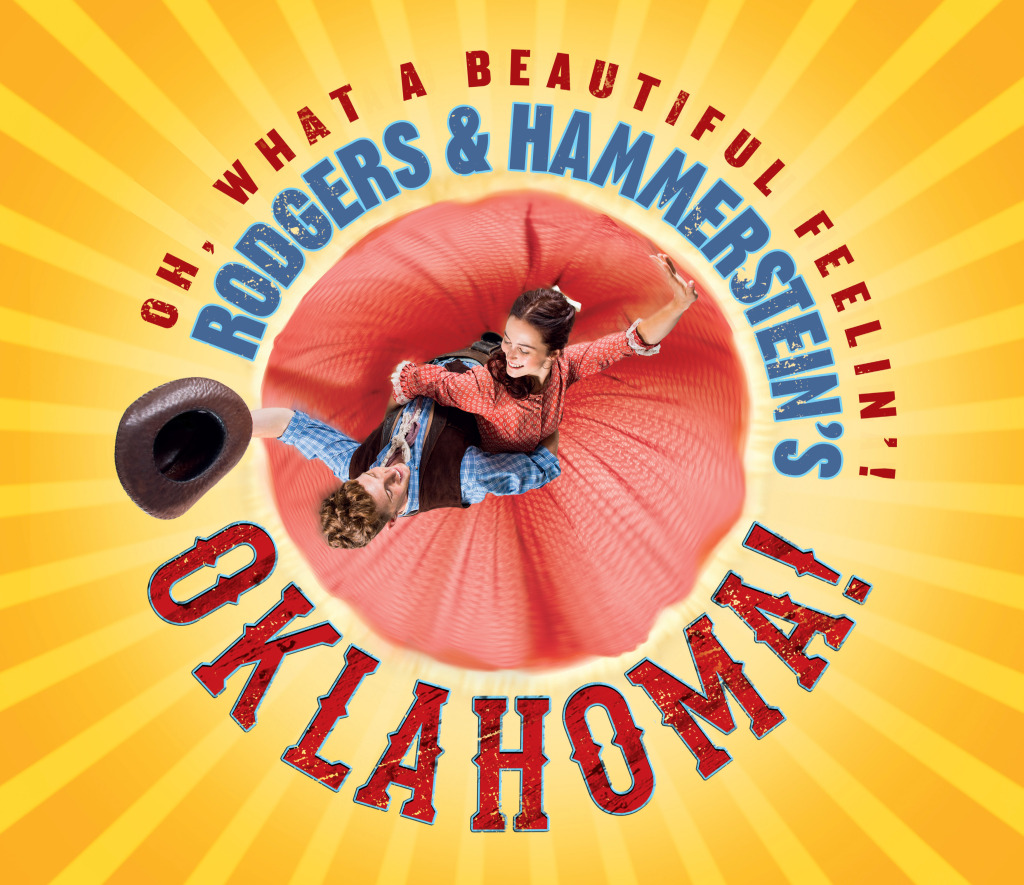 On Tuesday evening I headed over to see a production at the Hawth that I had been looking forward to seeing for ages. 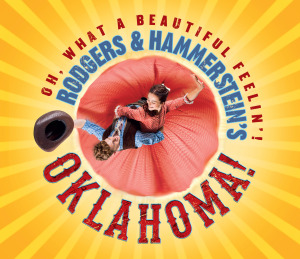 Oklahoma is one of those classic musicals that I grew up seeing regularly on TV on a Saturday afternoon. I had previously seen a couple of amateur productions perform the musical but never seen a professional production of it before. With the talented cast that production company ‘Music and Lyrics’ together with the Derngate Theatre Northampton had put together I was terribly excited.

During the rousing overture Francis O’Connor’s set is slowly revealed and for once didn’t focus on hazy meadows and cornfields but is pleasingly impressively rustic in it’s appearance.

The story….. if you haven’t seen the film, is about the ‘courting’ of young sweethearts Laurey and Curly in Oklahoma territory in the last century. Kansas having it’s first ‘gas buggies’ and ‘s 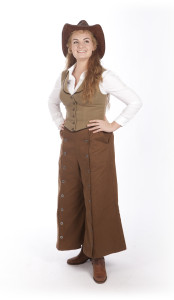 even storey high skyscrapers’ are big news and changes were afoot with the possibility of Oklahoma joining the new American Union.

The heroine, Laurey is superbly played by Charlotte Wakefield who brings a twist to the character I have not seen before. Gone was the Laurey who can come across as a wet weekend and has a spoilt and whiney manner. Here Wakefield confidently swaggers around the set giving Laurey a bit of the attitude that would be fitting on a farm in Oklahoma. Wakefield is no stranger to Rogers and Hammerstein’s music and performs it to perfection.

Ashley Day plays Curly, the cowboy to take the challenge of wooing this sassy lady. Day is the original American heart throb hero with such a twinkle in his eye and big grin on his face that he makes every 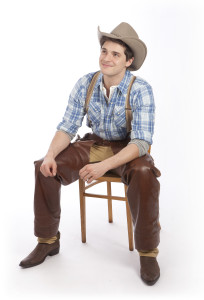 girl in the audience wonder why Laurey is playing hard to get.

Their chemistry is just right and even when they are arguing their mutual attraction shines. Their vocals are a delight. Spot on performances from each. Bravo!

The story of Oklahoma isn’t all sweetness and light. Nic Greenshields brilliantly portrays the creepy and dissolute Jud Fry who is the villain of the territory as he sinisterly lusts after Laurey. Others in the cast also bring out the best in this masterpiece such as Lucy May Barker playing the hapless Ado Annie, the girl who ‘Caint Say No’ as she struggles to choose between being on the open road with peddler Ali Hakim (Gary Wilmot) and settling down with local Cowboy Will Parker (James O’Connell). Belinda Lang play wise old bird Aunt Eller, she packs a punch as the matriarch of the show.

Special mention must be made of Drew McOnie’s sparkling choreography. Effortlessly moving from a hoe-down, to burlesque to a brilliant number involving hay bales, it was all such fun that I wanted to be on stage and join in. However it was Laurey’s dream ballet sequence that captured my attention most. Usually the lead characters are offstage at this point and they bring in professional dancers to dance the ten minute vignette but here all the lead actors proved they could dance as well.

Written in the 1930’s, Oklahoma can be a bit stale and overly traditional, not so in this production. Roger and Hammerstein’s music and lyrics seem fresh and director Rachel Kavanaugh has given Oklahoma a great injection of life that this is was one of the best pieces of touring theatre I have seen in a long time.

Oklahoma is at The Hawth in Crawley until Saturday (16th May) so book tickets now!

Click here for an interview with Charlotte Wakefield about her career to date and about Oklahoma.

4 thoughts on “Oklahoma | The Hawth Crawley and Tour | Review”