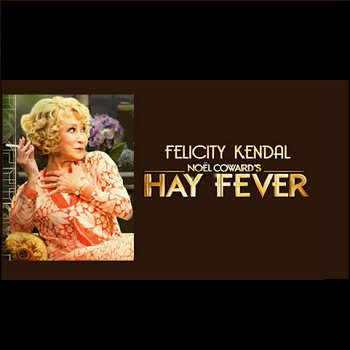 Noël Coward supposedly wrote the play Hay Fever in three days during 1924. Since then according to the programme notes, it has seldom been off stage somewhere in the world.  This is quite a feat to achieve in over 90 years but seeing this acclaimed Theatre Royal Bath Production that has now transferred to the Duke of York Theatre last week, it is not hard to see why.

Hay Fever is described as a comedy of bad manners. It focuses on a marvellously eccentric dysfunctional family and the guests that they invite to stay with them for the weekend.

Set in set in a stylish country manor in Cookham, Judith Bliss (Felicity Kendal) is an ageing, recently retired actress who already yearns to be back in the limelight. She grapples for attention at all times and invites a ‘young’ admirer Sandy Tyrell (Edward Killingback) to stay for the weekend. She is taken aback however to find that her husband David (Simon Sheppard) needing inspiration for his novel, has also invited a guest for the weekend, the very young Miss Coryton (Celeste Dodwell). Not only that, but both her children have too.

Felicity Kendal is ideally cast as the irrepressible Judith, her vanity and melodramatic histrionics were indeed ‘bliss’ to watch.  The rest of the family not only pander to her whims but their own cumulative dramatic flair leaves their poor bewildered guests confused and flummoxed.

Alice Orr-Ewing makes her theatrical debut playing Judith’s irritating daughter Sorel. She states that she would rather belong to a ‘normal’ family although she very soon shows that she is a chip-off-the-old-block and is seriously lacking any decorum. In contrast, Michael Simkins produces a wonderful performance as the very proper Richard Greatham who arrives as Sorel’s guest but is later pounced on by her mother.

Artist Simon Bliss (Edward Franklin) completes the family, his ‘date’ for the weekend is Myra Arundel (Sara Stewart) who Judith declares is a self-conscious vampire, but not even she is a match for this avant-guarde family.  Mossie Smith completes the cast playing the exasperated maid Clara to perfection.

Peter McKintosh’s stylish set gives the country house a warm lived-in feel and gives all the essence of 1920s charm. Admittedly the humour and style of Hayfever is dated but although not side-splittingly funny the show does work, thanks in part to Coward’s inspired observations on life. Lindsay Posner has directed a lovely classic production, performed I am sure, exactly how Coward intended it to be.

Venue: The Duke of York Theatre

Where I sat: Front Row of the Dress Circle slightly off centre – perfect view!

Recommended for:  This show is just perfect if you like a gentle pleasant night out. A classic play with a few giggles along the way.

This review was originally commissioned for and appeared on www.cheaptheatreticket.com buy Tickets here 🙂