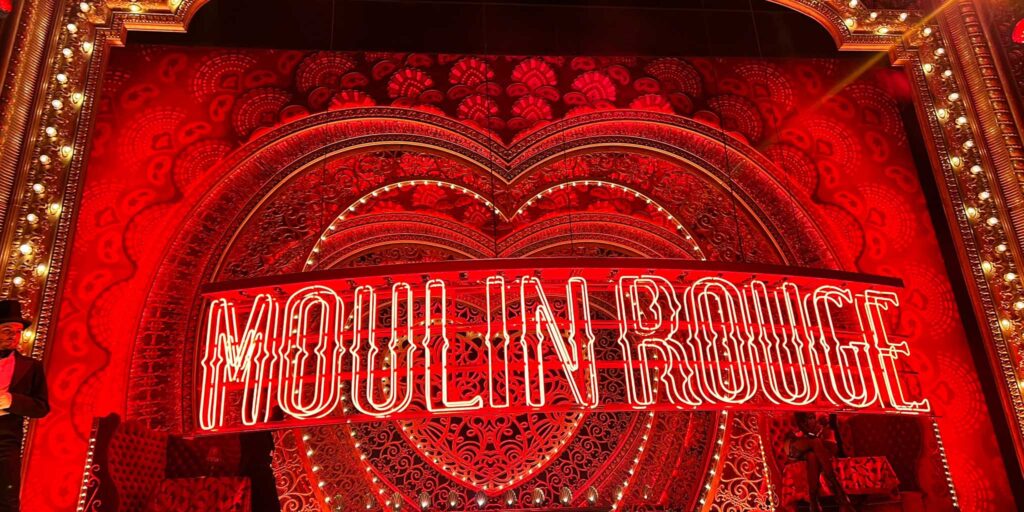 My first West End outing for a while due to the unpredictability of transport (which is worthy of a blog post in its own right). I arrived to see Moulin Rouge on Tuesday night completely stressed and overwhelmed. Walking into the Piccadilly Theatre’s auditorium my mood lifted, eyes widened, and I had the overwhelming realisation that going to see Moulin Rouge was going to be one of the best antidotes to any January Blues.

Drifting to my seat, I didn’t know where to look. Derek McLane’s scenic design is all consuming. The entire theatre is bathed in a sumptuous crimson, high above your head there are swathes of cloth and chandeliers, the stage is set as a nightclub and either side of the stage are two huge emblems synonymous of the Moulin Rouge nightclub in Paris, a windmill and an elephant. A dozen actors provide a calming pre-show entertainment. An early arrival is recommended to soak it all in.

The show opens to an explosion of light, sound and a lot of action. Within seconds you are thrust, like it or not, into a frenzied chaos akin to the Baz Luhrmann movie, there is so much going it is completely immersing. After the first ten minutes of utter craziness the pace slows and the story of *Truth, Beauty Freedom and Love (but most of all Love)* begins.

Moulin Rouge is set at the turn of the century. Christian (Jamie Muscato) moves to Paris to become a poet and live the bohemian lifestyle, he meets Toulouse-Lautrec and Santiago who realise his talents as a songwriter. The threesome decide to pitch their new musical to the proprietor of the infamous Moulin Rouge, Harold Zigler (Matt Rixon). Christian meets the beautiful star Satine (Melissa James) and falls head over heels for her. The problem lies in that she has been promised to the insanely rich (and in this case handsome) but evil Duke (Ben Richards) in order that he invests heavily to save the club.

Moulin Rouge is in essence a jukebox musical, the original film released in 2001 used hits of the time, but the stage show has been brought up to date and utilizes songs from Katy Perry, Sia and Walk the Moon along with dozens and dozens and dozens more. By trying to attract a new (and younger) audience, songs are unnecessarily shoehorned in wherever possible, either mashed up or sung in entirety. All very entertaining and corny but the original songs from the movie such as Lady Marmalade and Come What May were by far the most popular when they were performed.

Overall, the production is extravagant, spectacular and a feast for the eyes, but it compromised with the plotline, there were excellent performances throughout yet they were permitted little character development, there were too many songs and the ending was unfortunately rushed.

On the whole, I loved the show and it was just what I needed to blow the cobwebs away and give me a real buzz. What an excellent vibrant start to my West End theatre-going in 2023. I would recommend this for a spectacular night (without much substance) be prepared for a very ‘full on’ experience.