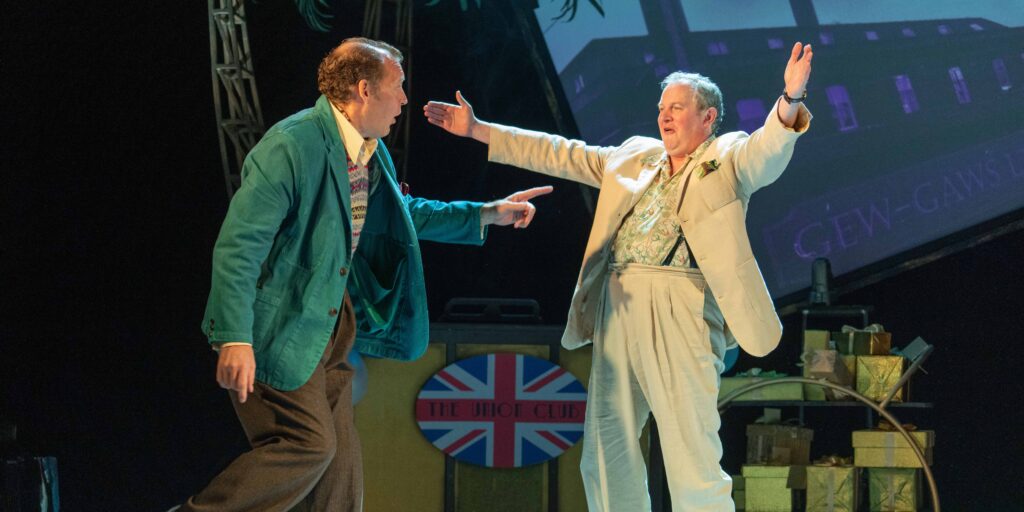 Once ranked by The British Film Institute as the ‘17th greatest British film of all time’, ‘The Lavender Hill Mob’ was an iconic 1951 classic production from the Ealing Comedy stable. Reflecting the post war Zeitgeist period, it represented the well-loved comedy caper genre stuffed full of charming toffs and amiable criminals, tiaras and swag bags, plus of course a jolly copper or two.

Fun fact: ‘The Lavender Hill Mob’ is named as one of fifteen films in the ‘Art’ category on the Vatican Film list!

I’ve not seen the original film, nor the 60th anniversary digital remake released in 2011, however I’m a fan of Miles Jupp, multi-talented comedian, erudite wit, TV, film and radio actor. So, I was looking forward to a fun night out with laughs galore. Sorry to say that I was rather disappointed. Having no idea of the plot, I had a sneak peak at some background information about the 1951 film which starred Alec Guinness, Stanley Holloway, Sid James and Alfie Bass ……. and Audrey Hepburn no less! It was just as well as I would have had no idea what was going on for the first 15 minutes after the performance began. The play starts off in reverse, almost at the final moments of the story and took off from there; ‘there’ being a Rio de Janeiro ex-pats’ bar where the main protagonist Henry Holland (Miles Jupp), currently living the life of Riley, is poised to regale the new visitor, ‘Mr’ Farrow (Guy Burgess) with the story of his life as a ‘non-entity’ – a bowler-hatted mediocre lowly bank clerk, for years dedicated to his role as overseeing gold bullion deliveries with a spotless reputation for pedantic efficiency. Then ….. light bulb moment, Holland goes totally off piste and devises a cunning plan to stage a massive heist: the embezzlement of very large consignment of bullion. All he needs is a decoy to smuggle it out of the country and a couple of gullible petty thieves to aid and abet him.

What Henry knows, but his pals in the Rio bar don’t, is that ‘Mr’ Farrow is in fact Inspector Farrow, who has rumbled Holland and arrived in his Brazilian watering hole to arrest and extradite him to England.

What follows is a frantic farce of a piece, driven at fever pitch by the clever direction of Jeremy Sams, with each character in the bar assuming several different roles in a re-enactment of Holland’s story. (They all assume wrongly that Farrow is actually a film director, and their aim is to impress him!) The thing is that Miles Jupp’s part is so heavy on dialogue and his delivery even more posh than his normal cultured accent that it was sometimes difficult to catch his lines, especially as he was in motion much of the time. Holland’s verbosity and pompous style were just a little superfluous, and dampened the comedy, in my opinion.

This innovative production was somewhat reminiscent of ‘The 39 Steps’ stage play I saw some 10 years or so back where 4 actors played no fewer than 139 different characters in the space of 2.5 hours! Now, this wasn’t quite that ambitious but the whole ‘improv’ style of it seemed familiar, and sadly not to my particular taste. Plus, the first half of the play I didn’t find terribly funny, and the action just all seemed rather heavy, a bit of a confusing melée; it appeared to take rather a long time to unravel. The action was alternately narrated by Holland and other characters, most of them assuming different parts, interacting with one another and occasionally with Farrow – who sat for much of the time on the sidelines as a spectator.

The second act was much more entertaining: the two aristo women from the bar, transformed into a couple of jovial Cockney crooks (originally played by Alfie Bass and Sid James), were clearly relishing their roles, giving us over the top performances delivered with real gusto. Both Tessa Churchard and Victoria Blunt (as Shorty and Lackery) were superb. The scene in Paris – a real highlight for me – was a proper hoot, and the only time I laughed out loud. Holland’s Eiffel Tower manufacturing sidekick, newly turned crim Al Pendlebury (Justin Edwards of ‘Endeavour’ and ‘The Thick of It’ fame) was quite splendid; his speech was much better paced, to my mind.

All was revealed in the last scene of course, with Holland being led away by Inspector Farrow, after a couple of hours of frenzied running about, slapstick, a bit of singing and dancing and larks-a-plenty. All very innovative, and I know that many members of the audience found it all great fun, but sadly not my cup of tea, this one. I do really believe though that the whole cast and crew should be congratulated on such a high octane, energetic production which certainly showcased these talented performers giving it their all.