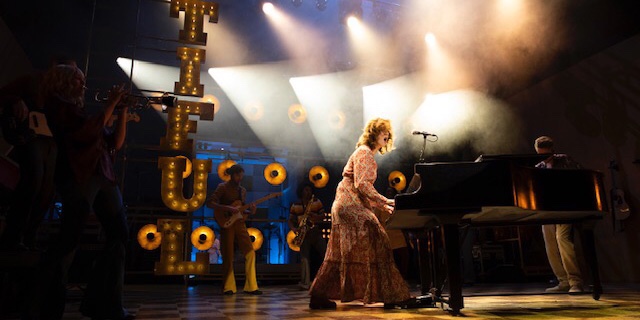 I saw Beautiful – the Carole King Musical several years ago in the West End and remember virtually nothing about the production except coming away awestruck at the sheer number of songs Carole King had written. She has, to date, written over 400 compositions recorded by over 1000 artists resulting in over 100 number one hits! Many of these are instantly recognisable today ensuring Carole King is one of the most prolific songwriters of the 20th century.

A brand-new touring production directed by Nikolai Foster is currently on a nationwide tour. The book is fast paced and moves through the story of King’s rise to fame through a chronological history of her songs. Thankfully this is not a ‘Jukebox Musical’ where songs are shoehorned in to fit a tenuous plot, in Beautiful, the songs are integral to King’s life and story and it is a joy to hear them.

The set has been restyled from the original production by Frankie Bradshaw and Foster’s new direction firmly puts the performers centre stage, which is exactly where they should be. The cast that has been assembled for this production are multitalented and brimming with energy.

The cast is ably headed by Molly-Grace Cutler performing with Carole King. She is warm, believable and her voice packs an incredible punch. The show starts with her early partnership and marriage to Gerry Goffin (Tom Milner) and their struggle to write their first hit songs, it then moves through the years to their marriage breakdown and King beginning to perform as a singer in her own right, culminating with her iconic performance at Carnegie Hall in 1971.

Every number, and there were many, was brilliantly executed, and I loved the way, that in many cases, the intro was provided by Cutler (Carole King) as she was composing and the song is taken over by the cast portraying the bands who were given the songs, (The Drifters / The Shirelles / Righteous Brothers etc).

However, at times the story was skimmed in favour of songsand needed to be expanded to give the characters more depth. There is a scene Carol announces she was pregnant at 16/17years old bringing a proposal of marriage from Goffin, in the next line we have skipped to when she has a 5month oldbaby, this draws a confused titter from the audience. It would have been nice to understand Carole’s feelings a bit more when faced with her marital and professional heartaches and her rise to fame as a soloist all felt very last minute.

King and Goffin’s relationship with Barry Mann (Jos Slovick) and Cynthia Weil (Seren Sandham-Davies) their friends and professional rivals was explored well and brought the audience a better insight to the world of songwriting. Both couples worked for the same music company owned by Donnie Kirshner (brilliant played by Garry Robson) and were often pitching for the same work.

The power of Beautiful is every note that is played. Carole King’s incredible rise to fame in a man’s world is amazing and it is not surprising and absolutely right that we are celebrating it 50 years later.

Definitely worth the ticket price