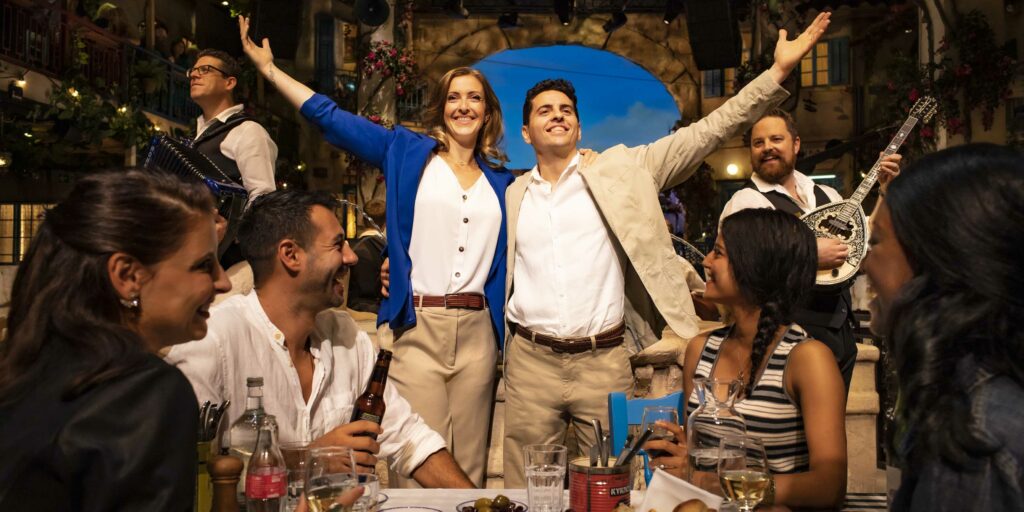 As Autumn sets in, the good news is that you don’t need suitcases, suncream and tedious waits at an airport to be transported to a luscious Greek island and into an exhilarating holiday atmosphere! A warm Greek welcome at Niko’s Taverna awaits, all you need to do is enter two great blue doors at the O2.

Based on the music of Abba (as if you didn’t know) Mamma Mia the musical opened in the West End back in 1999 and is still playing to full houses twenty years later, then came the two films which made Greek tourism on Skiathos and Skopelos boom. Now Mamma Mia the Party has opened, and what a party it is!

From the moment you set foot through the doors at Mamma Mia the party, chaotic London life and transport issues fade away. Whitewashed walls, Grecian flowers, decorations and photos adorn the walls and attentive staff give you a warm heartfelt welcome. Entering the venue itself is jaw-dropping. The event takes place in Niko’s Taverna, Bengt Froderberg’s whole design is stunningly beautiful, capturing the Greek essence completely. Photos cannot do the restaurant justice, the attention to detail is outstanding.

Mamma Mia the party is exactly that… a party! The evening consists of a delicious four course meal supplied by rhubarb, consisting of Greek tapas, a main course, dessert with baklava and coffee to finish, the portions were generous, and it was cooked to delicious perfection. You couldn’t want for more.  Between courses there is a show to watch about the owner of the taverna Nikos and his English wife Kate dealing with their daughter Konstantina growing up and finding love, naturally all interlaced with Abba mega-hits. The show doesn’t take place on a stage but within the seating area itself amongst the diners, actors intermingle with the audience and even the waiters are more than they seem.  If all that wasn’t enough, there is an Abbalicious disco to follow into the night.

Fed Zanni and Steph Parry lead the cast as Niko and Kate with Konstantina played by Julia Inbach and the role of her suiter Adam is taken on AJ Bentley. Other characters are the hapless chef Debbie (Linda John-Pierre who shares the role with Joanna Munroe) travel journalist Nina (Kimberley Powell) and her partner Bella (Elin Kronig Anderson), the host Fernando (Gregor Stewart) and Grandma (Pauline Stringer). They are accompanied by a myriad of dancers, musicians, singers and an aerial artiste (to be seen to be believed). The whole show is sublime with outstanding vocals belting out songs featured not only in Mamma Mia, but also joyfully other songs from Abba’s extensive back catalogue.

This isn’t just a show… it is an immersive experience which tingles every one of your senses. With tickets starting at £135 it is not a cheap night out, but it offers value for money and with the Christmas season approaching, Mamma Mia the party will be absolutely ideal as an alternative to the usual pub dinner and nightclub.

Even on a Monday night at the end of September, the atmosphere was electric, the only downside was not being able to crawl back to a nearby villa and do it all again, every night for a fortnight. This is the perfect one-night holiday for every Abba fan.