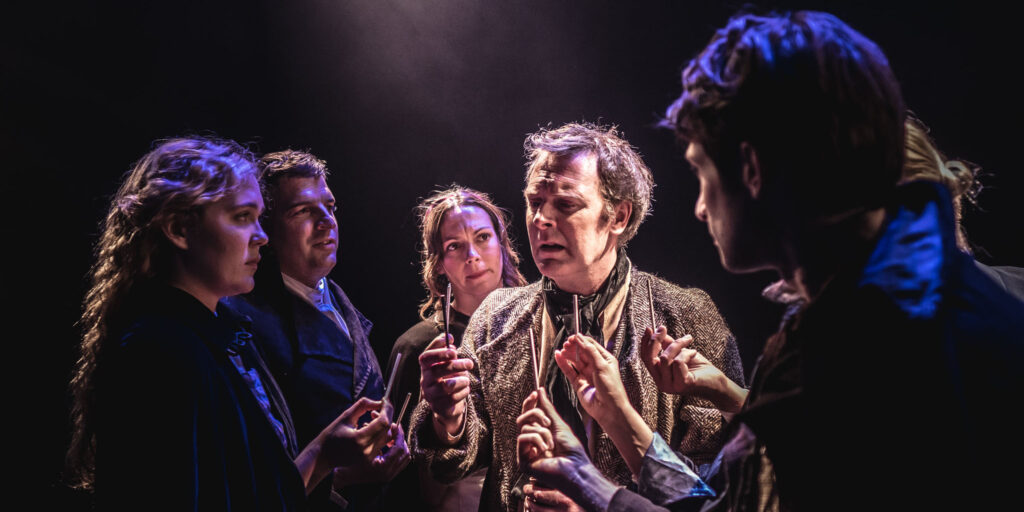 A Heartwarming Celebration of Parenthood

Having seen The Conn Artists’ previous productions of Courage and The Four Men, I was eagerly anticipating the company’s latest show which premiered at the Connaught Theatre, Worthing, before embarking on its nationwide tour.

The company’s name is a playful take on the venue of which the work was created, with the company being formed by people connected with the passion to create high quality regional theatre in Worthing, and they have certainly achieved that.

Silas Marner is George Eliot’s epic novel from the Victorian era that follows the story of a poor weaver, wrongfully outcast and condemned from society, who has been punished for a crime he never committed. His pain and grief consumes him as he becomes isolated from society, he develops an obsession with work and greed takes over, with money becoming his new religion; very reminiscent of Dickens’ Scrooge. When a young abandoned child turns up on his doorstep, this character is transformed from a cocooned chrysalis into a man overcome with joy, excitement and life. Ross Muir’s performance as Silas is exceptional, capturing the audience’s attention with the character’s fragile state of mind, evoking powerful empathy as the play progresses. By the end of the story, I felt so emotionally invested, and that is a credit not only to Eliot’s writing but to the imaginative adaptation by Geoffrey Beevers, the direction of Nick Young and the talent of the entire cast and creative team.

Each of the seven cast members, aside from the lead, had 3 or more characters to play, so you can imagine the energy and the skill it required to pull that off. Whilst I was very impressed, there were a couple of moments of confusion I felt when two characters played by the same actor had costumes and characteristics that were a tad too similar. But what a production of this scale does offer is endless creativity and opportunities to test the audience’s imagination. There were actors jumping into horse heads made of wood (with some hilarious horse acting), warm fireplaces portrayed by glowing lights, and rich sound effects on stage, small details that create a light-hearted and authentic experience. I’m a huge fan of puppetry too so it was really nice to see the young girl Eppie portrayed through this medium for part of the production.

The piece is also accompanied by sounds and songs of the period, with lots of opportunities for the cast to sing, clap and play instruments such as the violin, mandolin and accordion played by Jake Snowdon. The soundtrack was beautiful, moving and very effectively used.

The heartwarming play is a celebration of love, parenthood, community and hope, and whilst the core of the story has darker more serious elements to it, the fun and humorous manner in which it is told keeps it refreshing and fun to watch throughout. It is, in my opinion, the company’s best work to date, not only did I leave feeling inspired, it also left me feeling very proud to see such fantastic work created in Worthing.