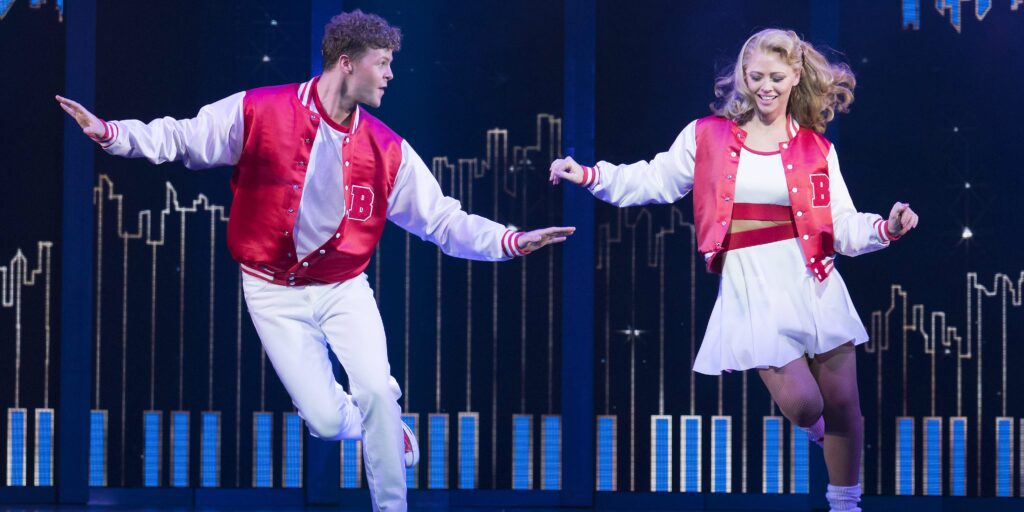 Big the Musical has opened at the Dominion Theatre for a short 9 week season, before stepping aside for White Christmas. Based on the 1988 movie it is the musical’s first outing in London having had a brief season on Broadway back in the mid nineties and more recently seasons in Plymouth and Dublin.

Twelve year old Josh Baskin dreams of being older and more confident. At a local carnival, he makes a wish to be ‘Big’ but when his wish comes true and he becomes an adult overnight he finds his troubles are twice as big as before. He leaves the safety of his home and is immediately thrown into an adult world. By sheer good fortunate (or convenience) he finds a job as a vice chairman of Macmillan toy company and discovers the working world isn’t as easy as he once thought and finds that adult relationships are equally as confusing as adolescent ones.

Jay McGuiness plays ‘big’ Josh and plays the wide eyed, innocent child in a man’s body beautifully. He is ably supported by Kimberley Walsh as his love interest Susan Lawrence the marketing executive who has lost her inner child. Wendi Peters is underutilized as his stressed but doting mother and Matthew Kelly plays Josh’s new boss searching for a Christmas toy that will become a best seller by desperately trying to get his employees to connect with what children want.

Unfortunately, Big the Musical suffers the same fate as 9 to 5 the musical (both based on films from the 1980s) in that although the storyline is light, funny and whimsical it has now shockingly outdated. The sexual overtones between Josh (12 years) and Susan (ahem) feel very uncomfortable and are not necessary when a light romance full of teenage angst would have made it easier on the stomach. Walsh’s character Susan jumps quickly from one failed relationship to another while trying to find the perfect man until she thinks she has found it in a 12 year old, needy or what?

With music and lyrics by David Shire and Richard Maltby Jnr there were few stand out numbers. Wendi Peters, others connected with every mother in the audience as she heartbreakingly sang about missing Josh in ‘Stop Time’, Kimberley Walsh was dealt a mixed bag of songs but ‘Dancing all the Time’ stood out and Jay McGuiness singing ‘This isn’t me’ as a child  struggling in a man’s world was lovely. Generally, the songs were entertaining to watch but regrettably forgettable, the only tune I went home humming was chopsticks.

Big the Musical does have a lot going for it, it is light, well-acted, and has charm. If you are seeking comparisons, look towards two other Dominion shows – Elf and White Christmas and you won’t go far wrong.