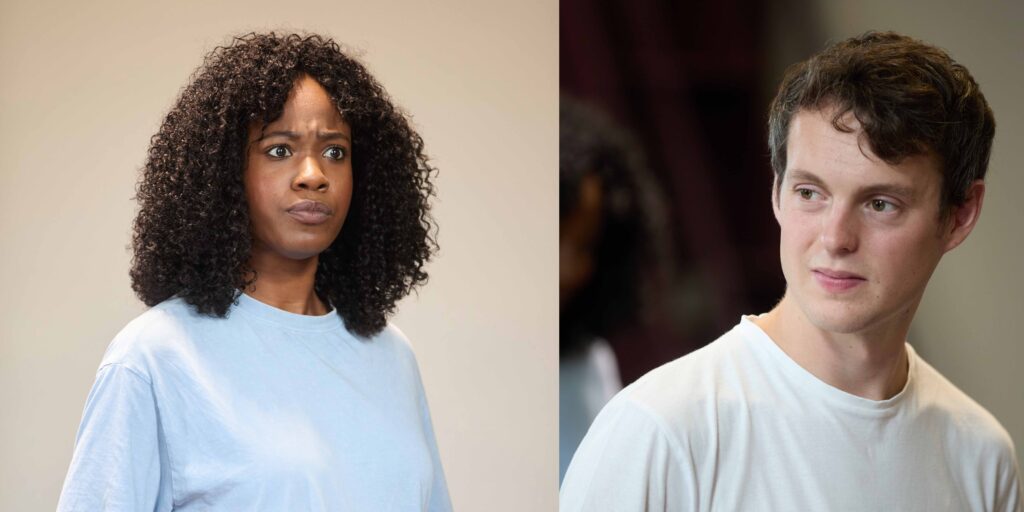 In the 30-years since its first performance at the National Theatre in 1992, Stephen Daldry’s production of An Inspector Calls has won a total of 19 major awards, including four Tony Awards and three Olivier Awards, and has played to more than 5 million theatregoers worldwide. An Inspector Calls is the most internationally-lauded production in the National Theatre’s history.

Written at the end of the Second World War and set before the First, An Inspector Calls is a compelling and haunting thriller. The story begins when the mysterious Inspector Goole calls unexpectedly on the prosperous Birling family home. Their peaceful family dinner party is shattered by his investigations into the death of a young woman.

A few questions were put to Evlyne Oyedokun and George Rowlands who play Sheila and Eric Birling respectively.

Did you study An Inspector Calls at school? If so, did you enjoy it when you first read it? Do you think your appreciation of the play is different as an adult?

George: I did read it at school, although I can’t really remember much of it. But I did always like it. I always think at school when you sit down and analyse every single word it can make you go a bit crazy, and I always thought it ruined books and plays. But now that I’m an adult, or more importantly now that I’m an actor, I definitely have more of an appreciation for it.

Evlyne: I actually didn’t study An Inspector Calls at school, I studied To Kill A Mockingbird. I’d heard about An Inspector Calls but I didn’t really know what it was, or really anything about it. It wasn’t until I got this audition that I actually read the play for the first time, and I still didn’t quite understand it. It took me a while to realise how many layers this play actually has.

This production of An Inspector Calls is now 30 years old and yet still as popular as ever. What do you think makes the play so timeless and this production so engaging?

Evlyne: Well, the fact that is has three timelines helps. It’s set across three timelines – you’ve got 1912 which is where the play is set, then you’ve got the future, which is the Blitz, 1945, and then you’ve also got the current now, 2022. It’s amazing. You’re flicking through the past, present and the now constantly, and it’s so reflective on humanity so it makes it so relevant, and people can really see themselves.

George: At the end of the day, at its centre it’s a play about somebody in distress, and that doesn’t get old, does it? I think at different points in time when we’ve put it on over the last 30 years, it’s been relevant. And this time around I think it’s more relevant than ever because of what’s going on in terms of the strike action and housing crisis.

Can you tell me three facts about your character?

George: Eric is well educated because he’s been sent to public school. He enjoys a drink, probably a little bit too much. The third fact is that Eric really wants to be respected by, namely his dad. Unfortunately, the combination of those three facts results in some pretty catastrophic things.

Evlyne: Three facts about Sheila… well she’s absolutely besotted with Gerald. She is very self-absorbed and in her own world, as she’s been brought up that way. She absolutely adores clothes. It’s hard to give facts without spoiling it!

What made you want to be an actor?

Evlyne: Oh gosh! With me, I actually didn’t ever want to be an actor, it happened by accident. From a young age I was struggling with people, and I never really spoke – I was pretty much mute to people I didn’t really know. My mum advised me to go and see a youth company at the weekends, so I did that, and I didn’t realise how natural it was to act as it is to live in the real world. I was a lot freer. That’s how I realised it’s the only thing I can do. Drama school taught me how to speak, and acting taught me how to be more of a human than I ever was.

George: I think it beat doing any other boring job. I did find out quite early on in Year 6, for the end of school plays we did Wizard of Oz and I completely rewrote the script because I thought it was rubbish, and obviously made my parts the best. I like storytelling and I like the creative and artistic aspect of it. With this production it has enabled that part of acting, and it’s been a really good creative process.

What’s the best part of about going on tour with a show?

Evlyne: It’s exciting to share a relevant story with so many people. We come to you guys, and you stay where you are.

George: Being able to play in these amazing theatres, I’m really excited to do that, and bringing the story to people.

What advice would you give me about going on tour? Are there any essentials to have in your dressing room, or top tips for making yourself feel at home in each town/city?

Evlyne: I’m really bad at this stuff, a lot of people tend to make their dressing rooms cosy with nice blankets and things. I just bring everything that I have in my bag and that’s pretty much it. Some people put up fairy lights and flowers, but for me I’m very simple. With autism, as long as I’ve got really comfy clothes, a phone charger and headphones to cancel out sound, I’m all good.

George: I’m sharing a room with Simon who’s playing Gerald. I don’t know… I think a bottle of water goes a long way. A bottle of water and some Vaseline is not a terrible idea – for the lips, obviously. I get chapped lips.

What’s the most challenging part of being a performer?

Evlyne: For me it’s not being able to see your work or the story you’re creating because you’re so involved and living in the moment of it. You don’t really see the end result. I feel that the end result is mainly the response from the audience, if they got the story then we’ve done our job. I think that’s the most challenging part of it.

George: With other jobs you can put a direct amount of work in, you can work more, you can do this this and this and your results will be better because of it. Like if you’re studying for an exam, the more you revise the better the result. But with acting it doesn’t work like that because being good is so subjective – there’s no grade. I think that’s quite hard. Putting lots of work in and not knowing really how it will go.

Evlyne: One of the sayings at RADA was, ‘plan it, know it and forget it’ – it’s the hardest thing to do, but it’s the most rewarding thing to do.

If you could swap roles with the other person for a performance, would you?

Evlyne: If I had to be someone out of all the characters it would definitely be the inspector, because I’m obsessed with crime documentaries and serial killers, everything to do with murder, unsolved murder, unsolved mysteries, death row, all of that! I’ve pretty much seen everything and I rewatch it to go to sleep.

George: If I could pick any character I’d probably pick Edna. I would love to play the role of Edna. If you haven’t seen this production, there’s a special thing that Edna is part of – a little bit of magic. She’s amazing. My second choice would be Mrs Birling. I really like Mrs Birling, she’s got such sass, and doesn’t have the insecurities that Eric is stuck with.