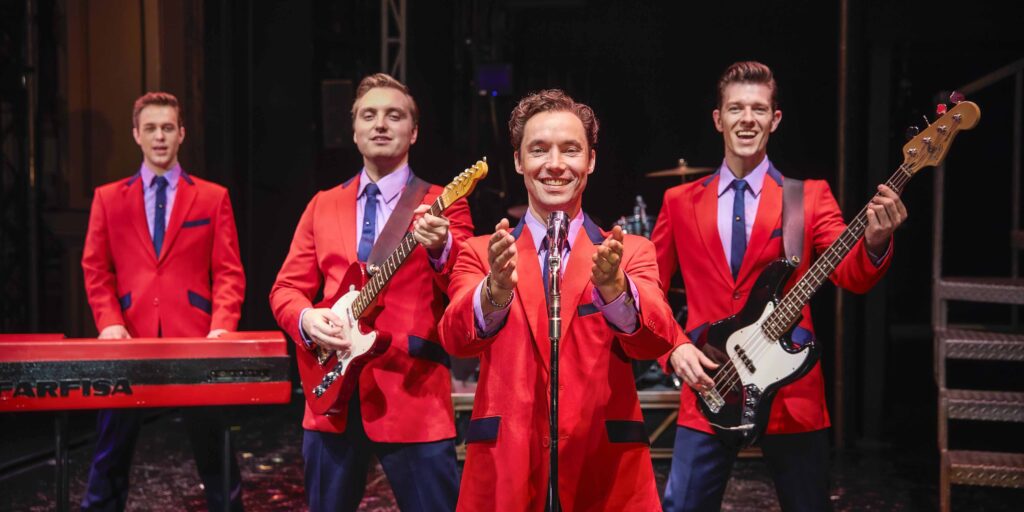 Can’t Take My Eyes Off This Musical

First previewed at the August Wilson Theatre on Broadway back in November 2005, The Jersey Boys is a long-running jukebox musical following the story of 60s Rock n Roll legends Frankie Valli and The Four Seasons.


When the much-loved show first exploded onto the scene it launched itself as a classic must-see production by winning the Tony Award for Best Musical (2006) and Olivier Award for Best New Musical (2009) and now celebrates a whopping 17 years since its inception, oh and since then just another 63 major awards to boot!

Like every model musical this show boasts a huge variety of classic household hits that you can sing and tap your toes to, Big Girls Don’t Cry, Oh What A Night, Can’t Take My Eyes Off You and Beggin’ are just a few of the tunes that might live in your head rent free; the ones that give you that feel-good-factor that we all know and love that make you want to get up and dance, which was certainly the case for the crowd at the Congress Theatre this evening.

From the streets of New Jersey to the Rock and Roll Hall of Fame, the story of The Jersey Boys is told in a documentary style format that dramatises the formation, success and eventual break up of the iconic group in their unmistakable red suits; while their harmonies were perfect on stage, off stage it was a very different story.

The narrative explores the inception of the band, their humble beginnings and the troubles they would get themselves into whilst youngsters in Jersey. It dives into the trials and tribulations of life in showbusiness, highlighting their friendships and the fallouts that would follow, as well as the heavy consequences of a life on tour and the devastating impact on home life and family; there is plenty of drama behind the glitz and glamour.

Whilst this story has been told for many years, the quality has never gone astray as the two surviving Four Seasons members, Franki Valli and Bob Gaudio, had a lot of involvement in its early stages. You have to have a certain raw talent to emulate a singer of such versatility and range, but as Franki remarked on the first actor to play on stage ‘he was so good that I wondered where he’d been when I needed him!’. The same is true to this day as we saw Ryan Heenan take on the lead role in Eastbourne, his vocal range and singing ability were truly spectacular and the same can be said for his counterpart Blair Gibson who played Bob Gaudio, his performance felt truly authentic and the raw musical ability of the entire cast was a real pleasure to experience live.

The ever-changing set featured a backdrop of bright projected colours and a large screen that helped to add another dynamic to the production, whether that was through the use of live cameras on stage to reflect a recorded TV performance, to historic shots of a 60s crowd going wild or animated illustrations, the energetic visuals acted as a great way to support the narrative and keep it flowing seamlessly.

It’s a show that’s jam-packed with scintillating songs performed by very talented musicians. If you want to immerse yourself in 60s America then you’ll love the vintage costumes and overall ambience of the show; it’s certainly an exciting leap back in time that you simply can’t take your eyes off.

The Jersey Boys is currently on a UK-wide tour, visit jerseyboysmusical.co.uk to find out more and book your tickets to this toe-tapping sensation.