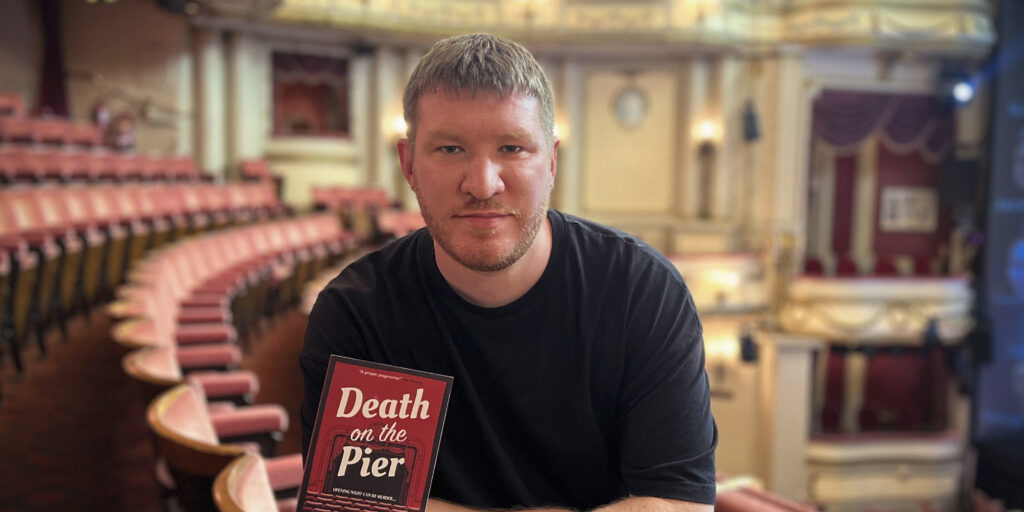 Death on the Pier

Death on the Pier is the debut novel of West End insider Jamie West.

No stranger to the world of theatre, Jamie’s has a fascination for ‘lost’ theatres and for his novel he has recreated the Palace Pier in Brighton and the setting for his Murder Mystery.

We asked Jamie a few questions….

A little bird tells me that your background is in theatre, tell us a little about that.

I’ve been working in theatre professionally for sixteen years, ever since I left drama school. I was lucky enough to find my niche in the automation department, where you’re in charge of operating and maintaining the equipment that controls the motorised set you see moving around on stage. I’ve been lucky enough to work in some incredible West End venues over the years and work on some really great shows.

Before drama school I was part of an amateur dramatic group back in Essex, where I used to operate the lighting and help build the sets. It was also the place where I was introduced to Agatha Christie’s plays for the very first time when we did a production of Spider’s Web (still my favourite Christie play!). So theatre and murder mystery have been mixed up in my life right from the beginning.

What inspired you to pick up a pen and start writing a detective story, was it an easy transition?

My first love has always been the theatre and I’ve always been fond of a good murder mystery. It seemed to make sense to try and combine the two into a novel! When I was at college I used to write short plays and even a full-length musical(!), so there’s always been an urge to write.

I’d been kicking around the idea of writing a novel for a few years. It was only when I discovered the “lost” Palace Pier Theatre in Brighton that everything fell into place. The characters and the plot just seemed to fall in my lap. I also really liked the idea of using theatres that have been demolished or lost to history and recreating them as locations in my books.

Did you draw any inspiration from any shady goings on that you have seen? Or are any of the characters based on real people you have worked with?

No one character is based on any one person – hopefully putting everyone I’ve worked with at ease (!) But everyone has stories or anecdotes from previous jobs they love to share, so there’s been a lot of inspiration about.

There’s also a handful of theatrical stereotypes that I’ve enjoyed weaving into my collection of characters: the overbearing lead actress or the grumpy old hand that’s seen it all and has grown cynical of the industry. Luckily, in real life, you don’t encounter those types of people very often.

As far as I know, no murders have ever been committed on shows that I’ve been working on!

What ‘can’ you tell us about the plot?

Death on the Pier is about Bertie Carroll, a murder mystery playwright who goes to see one of his productions with an old school friend, Hugh, who just happens to be a police detective.

In the course of the action a former Hollywood actress gets shot on stage, and we think it’s just part of the play. But we very quickly discover it’s real and she truly has been murdered in front of an audience full of witnesses.

Bertie and Hugh decide to join forces to see if they can get to the bottom of what really happened. Readers have been quick to pick up on the suggestion that there might be something “more-that-just-friends” about the relationship between the two.

If in the future, Death on the Pier were to be made into a play or movie, who could you visualise playing the lead characters?

The other day I was part of an online read-along group and there was much discussion over who might be cast in an adaptation.

Over years of cast changes and watching understudies go on, it’s fascinating to see different actors bring the same character to life in different ways. The great thing about books is you don’t have to settle on just one person, I’m always changing my mind.

At various points Bertie, my playwright turned sleuth, has been played by Ben Wishaw, Sacha Dhawan and Jonathan Bailey. Russell Tovey has filled in for Hugh, the police detective friend, as have multiple cast members from Peaky Blinders.

As for the Hollywood leading lady, Hannah Waddingham has always popped into my mind as has her television wife from Sex Education, T’Nia Miller.

Because of the setting, an adaptation into a play would be really fun. The murder takes place in the middle of the stage, during a show. You could pretty much do the whole thing for “real” with the audience watching on, just like in the book!

In TV adaptation or movie, you could recreate the “lost” venue for real and viewers could experience what it would have really looked like, which would be fascinating. The rights are still available, so get in touch!

What did it feel like to see your book in print? Are you going on book tours etc?

It been fun to see it in other people’s hands. Every now and then someone will post a photo online showing it off. It a real confirmation that it’s out there in the world and there are people who are actually reading it.

I’ve loved being a guest on some podcasts and doing interviews to talk about the book. I’ve only done one in-person event, which was before the book had come out. I was a bit overwhelmed that people came up to talk to me and already knew who I was, especially as there were several bestselling authors at the same event!

Well, Dear Evan Hansen has just closed, so I’m out of a job! Hopefully something will come along soon. In the meantime, I’m working on the second book in the series, set in another “lost” theatre: The Gaiety theatre which used to be on The Strand. It was demolished in the late 1950s and a hotel has been built on the site.

There’s plenty more lost theatres to recreate and plenty more adventures for Bertie and Hugh to have in future books.