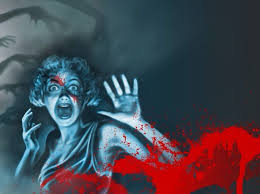 When I was asked by Official Theatre if I would consider blogging about Grand Guignol at the Southwark Playhouse I said ‘yes’ immediately.

Then I looked at the blurb…

Then I wondered what I had let myself in for…

I doubted I would like this one. However, in for a penny, in for a pound, after all, the best thing about having this blog is seeing a wider variety of things than just ones in my comfort zone.

Written by Carl Grose the play is about a theatre called the Grand Guignol situated in the bohemian Montmartre district of Paris at the beginning of last century. The Grand Guignol specialised in tales of horror so shocking and grotesque that it was nicknamed the ‘Theatre of Terror’.

Theatre owner Max, Andy Williams needs his script writer André Jonathan Broadbent to make each of his plays more terrifying than the last to uphold the theatre’s reputation. He wants boundaries pushed, he wants more of the audience fainting. André struggles with this. Enter psychologist Dr Alfred Binet Matthew Pearson who is eager to study André’s obsession with horror. It transpires howver that André draws on Binet’s experience and knowledge of the mind and finds his inspiration.

Grand Guignol’s actors Henri Robert Portal and Maxa Emily Raymond together with Ratineau Paul Chequer who as well as acts, makes all the theatre’s props and special effects (including 6 varieties of stage blood) are very supportive of André’s plays as they are renowned throughout Paris as the best in their art.

It all sounds a bit macabre and gruesome, yes it is. Yes but the real beauty of this production directed by Simon Stokes is that it is hilariously tongue in cheek. The cast of 6 who play multiple characters ham up the parts beautifully and instead of grimacing at the chilling turn of events you find yourself watching with a morbid curiosity wondering how it will all pan out.

Squeamish – yes I am, but with the humour, absurdity and perplexity I loved it! I would heartily recommend this to anyone who wants to grab a last bit of Halloween madness before it ends it’s run on the 22nd November

A splatterfest of blood and gore – but delightfully so.

I have mentioned before in this blog that when you are not a Londoner or a regular commuter sometime Fringe / Off West End theatres aren’t the most popular of choices as you need to guarantee your last (slow) train home. I often fall into the trap of believing if I am not familiar with the venue and it is not in central London (that is Shaftesbury Avenue or the Strand) then it would be difficult.

Face it – ‘small town’ people like me prefer to stay on one train from A to B, however as most commuters know that with one change of train (Clapham) Waterloo is just as easy to reach from the home counties as Victoria. From Waterloo, two stops on the tube – yes only two, you reach Elephant and Castle home of the Southwark Playhouse.

Very accessible I shall certainly spend more time studying their programme in future. Grand Guignol was SUCH a treat.

Thank you once again Theatre Official for this special opportunity. I would for more details about this and other fringe shows please visit this page.
http://www.officialtheatre.com/fringe/

Don’t take my word for it: Here is what other people thought that night:
London City Nights
Starling Arts
Views from the Gods

Follow the hashtag #grandguignol to find out even more.