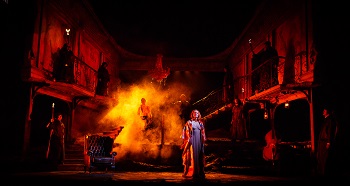 Daphne Du Maurier’s book Rebecca is one of the most well known of English classics. Written nearly 80 years ago it is still a bestseller having never gone out of print and was the subject of an iconic movie directed by the master of suspense Alfred Hitchcock.

When Maxim de Winter brings his new bride home to his country house, Manderley, she is immediately aware of the shadow that Maxim’s former wife, the beautiful Rebecca casts over it’s occupants. Max refuses to talk about Rebecca and the way she mysteriously died however his indomitable housekeeper Mrs Danvers still devoted to Rebecca ensures that the new Mrs De Winter feels ever uncomfortable and inferior. Eventually the manipulated Mrs de Winter is consumed by jealousy and as things come to a head, the story of the beautiful Rebecca is revealed.

I was expecting a psychological thriller akin to the book when I arrived at the Theatre Royal in Brighton last night. However the production by Kneehigh Theatre took me completely by surprise. The book’s suspense is all still there with the leading characters providing the chilling narrative but instead of keeping people on the edge of their seats, tension is interspersed by the supporting characters with comedic, almost farcical scenes, sea shanties, puppetry and dance. 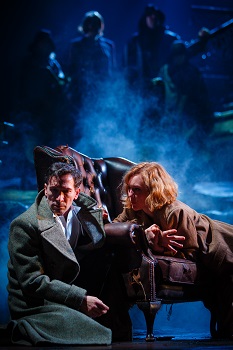 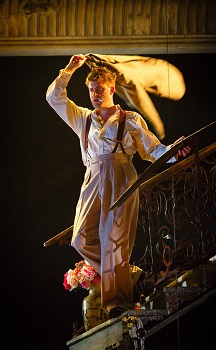 Adapted and directed by Emma Rice it is a clever mix, and once I had shifted my mindset, I really enjoyed the spectacle.

The set designed by Leslie Travers was magnificent in every sense of the word. A country manor, an abandoned cottage and the atmospheric Cornish coast seamlessly share the stage and the cast of 12 dressed as fishermen impressively created other scenes by using props and puppets.

Imogen Sage is perfect as the young Mrs de Winter, from the moment she opens the play with the infamous line ‘Last Night I dreamt I went to Manderley again…’ she charms us with her innocence and vulnerability until; in yet another plot-twist she seemingly changes her entire persona in Act 2 and becomes a chain-smoking vamp. 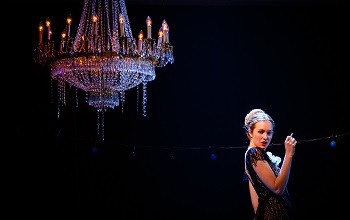 Emily Raymond (Grand Guignol) was terrifying as the formidable Mrs Danvers, her role most resembles the original charactor and the tension between Danvers and Mrs de Winter unseen by Maxim played by Tristan Sturrock was keenly felt.

If you are going to embrace the comic elements of the piece then a special note must be made of Katy Owen who as playing a young boy Robert leapt around the stage with high energy and spirit and showed great personality. She played a fantastic character, unfortunately for me, it was in the wrong show.

Most of the lighter bits were genuinely funny but as times they ruined what otherwise would have been a phenomenal play, I did wonder for a while whether Kneehigh had adapted the play for a family audience however with a unnecessary use of the F word and an over sniffy dog amongst other things I am not convinced.

Generally I am all in favour of putting a new slant on classics and Kneehigh’s interpretation of Rebecca really works very well and is thoroughly entertaining and a wonderful example of retelling a favourite story, however if you are looking for a tale of chilling suspense and intrigue, maybe you should look elsewhere.