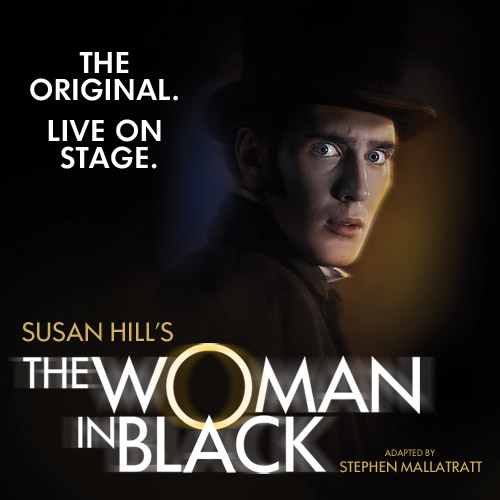 Readers of this blog will know by now that I am a little bit squeamish when it comes to Ghost / Horror Stories but I have been very brave lately and visited Grand Guignol and Classic Ghosts and rather enjoyed them so I jumped at the chance to go to The Woman in Black when the wonderful Rebecca from Official Theatre invited a group of #ldntheatrebloggers along to see it. 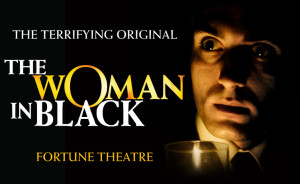 The Woman in Black | Review

The Woman in Black is meant to be the scariest play in the West End. I have not read the book (by Susan Hill) or seen the recent film (starring Daniel Radcliffe) which my daughter helpfully said was the scariest thing she has ever seen. It was not at all surprising therefore that we were all a little nervous prior to going in. A lovely glass of Rosé kept the nerves at bay though as we entered the theatre.

The Fortune Theatre is dinky, a gorgeous intimate venue seating less that 500 people over three levels. I was absolutely charmed, that is..until I saw my seat. All bravado left me.

My seat was Stalls B9 and when you see the seating plan you will realise why I was a tad nervous. Even the seating plan doesn’t give it justice. There is a walkway jutting out into the audience with steps leading down into the auditorium and I was right at the end of it. THANK YOU REBECCA!

In case you haven’t seen the movie, the story is about a young lawyer, Arthur Kipps being sent to an old house in the country to sort through the papers after the elderly resident has died. The local villagers are afraid of the house and are reticent towards Kipps, and it is not long before he understands why. The ghostly figure of the Woman in Black haunts the house and terrifies the locals.

This play is certainly no ‘Half a Sixpence’ (a #stagey reference there about the name Arthur Kipps). The play starts simply enough as we get to know the two (yes two) characters. The tale is told by an elderly Kipps who need to build courage to tell his story to his friends and family. He employs an actor to help him verbalise his experiences. As they retell Kipps’ story, the tension grows and as you would expect there are a lot of jumps and surprises, helped along by excellent acting and chilling special effects.

The two actors in question, Julian Forsyth (Kipps) and Antony Eden (Actor) are masters of their art. From Forsyth’s opening few words (which he says several times) to Eden’s terrifying realisation of his situation had me hooked throughout. And the dog (Spider)…… first rate! 🙂

The set for the most part was bare, apart from a large wicker trunk which doubled up as a horsetrap, a bed, and a train amongst other things. This is an ingenious move by designer Michael Holt, because when other parts of the set are slowly revealed the audience sits up and takes note!

As you would expect, the suspense is the key element of The Woman in Black, every unexplained knock, jolt and movement is carefully executed to maximise full effect. There is no blood and guts (thankfully), just wholesome fear of the unexplained.

Why not visit The Woman in Black website where you can see a trailer of the show and also a fascinating video of an experiment where an audience’s heart rate is monitored while watching the film and then the play.

I may watch the film now – may not – but I enjoyed The Woman in Black thoroughly (I am getting quite fearless it seems).

And my seat….. fabulous! It took me until the interval to realise I hadn’t even got my glasses (long distance) on. However, in hindsight I do think that I would have felt more of the effects sitting a couple of rows further back.  It was a little too close. But that is me being fussy. I have duly added this seat review to Seat Plan

I thank Rebecca & theatrebloggers for thinking of me once again and also feel free to check out some of the reviews from the bloggers who came with me that night.

Buy tickets for the Woman in Black here