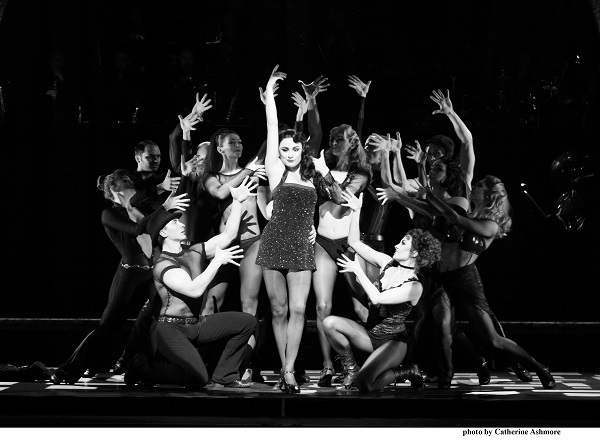 Roxie Hart is accused of murdering her lover and sent to County Cook Jail, the sentence for murder is to hang but no woman has been hanged in the State for 47 years. The girls are far from being repentant as they staunchly justify their actions and scrabble for the best alibi, best publicity, best lawyers and best photo shoots. When a shock verdict is announced however they realise they are far from immortality and the game changes – or does it?

The musical Chicago based on a play written by a reporter covering murder trials in the 1920s opened on Broadway and in the West End in the seventies and has been very popular since (with a film made in 2002). This week it continues it’s UK tour with a stop at The Hawth in Crawley where it plays until Saturday.

What I really love about the stage show is that with it completely relies on the amazing music and the awesome cast to tell this sexy story of murder, greed, corruption, violence, exploitation, adultery and treachery. There is no scenery, no costume changes and few props. The 11 piece band is seated on stage making the fabulous jazz hot music central to the show and the performance area is used to maximum effect.

Ann Reinking‘s choreography is based on the late great Bob Fosse’s work and is integral to the show. Fosse’s unique style is instantly recognisable and the ensemble clad in sexy basques, stockings and bowler hats are sensually sensational as they glide, cavort and dance in a splendid unison. The cast stay onstage throughout the show, sat at the side until needed yet is always involved and part of the show.

Opening night at the Hawth saw Hayley Tamaddon’s understudy Lindsey Tierney step into the silver toe shoes of Roxie Hart, wowsers what a firecracker she is! Sultry and sexy she commands the role of Roxie who manipulates everyone until she is headlining the newspapers rivalling her nemesis Velma Kelly played by the ultra sassy Sophie Carmen-Jones. 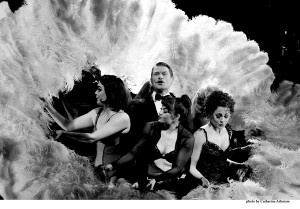 They both vie for the attention of hot-shot lawyer Billy Flynn played by John Partridge, whose impressive history of musicals far outshines his 5 year stint in Eastenders. With his (very) cheesy grin and impressive song and dance moves he sure gives the audience a bit of ‘razzle dazzle’. Other notable mentions go to X Factor winner Sam Bailey playing the matriarch prison warder Mama Morton and Neil Ditt playing Roxie’s almost invisible husband Amos, whose vain attempts to get noticed are loved by the audience.

Musical Director Ben Atkinson ensures that the delightful music stays at the forefront of the show and even makes sure that his orchestra get their own share of the spotlight.

Without a doubt this is the sexiest sassiest show currently in the South East but you have to be quick to catch it. It is only playing until Saturday 4th June at the Hawth in Crawley so hot foot it over there for a bit of sizzling jazz action.

One thought on “Chicago | The Hawth Crawley | Review”