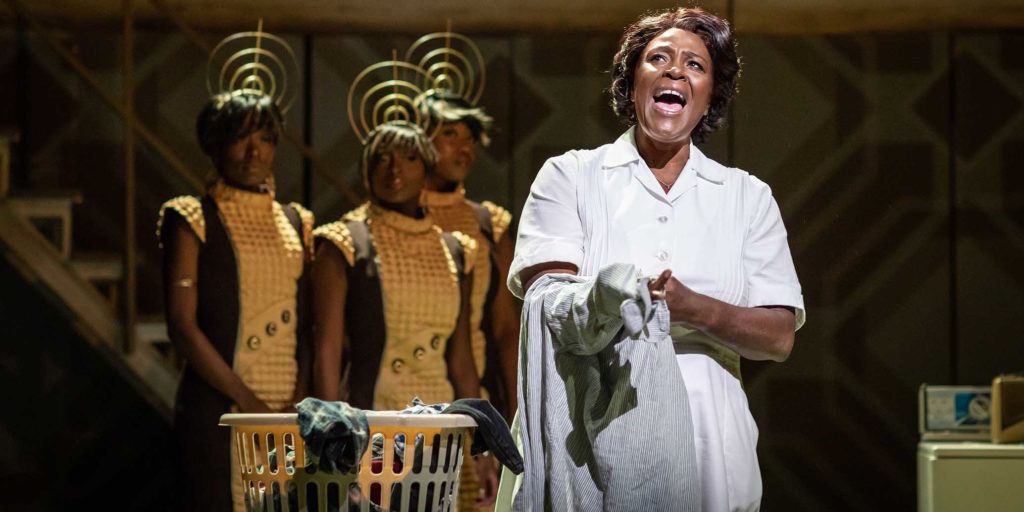 Once in a while, the West End, breaks the mould and brings something completely different to the stage. or Change is one of those musicals

The year is 1963 in Louisiana at a time of political unrest and racial segregation. All is not well in the Geller household. The recently widowed Mr Geller has remarried again and everyone is finding it hard to adjust. While Stuart Geller spends his days soulful tunes on his clarinet, his new wife Rose struggles to settle in and find her place and his son Noah, missing his mother dreadfully, finds it hard to warm to his new stepmother.

Meanwhile, their maid Caroline, a 39 single mum with four children struggles to make ends meet on her $30 a month. She spends her days in the Geller’s basement with only the washer, dryer and radio for company, drowning in her sorrows and broken dreams. When Rose decides to teach Noah a lesson about money and tells Caroline to keep all the loose change she finds in his pocket Caroline is conflicted about what to do.

or Change is a show that can be watched and enjoyed on many levels, on the one hand, it can be seen as entertaining with Caroline singing and arguing with inanimate objects brought to life by her imagination. On the flip it takes a discerning look at human behaviour as well as racial, political and economic tension by highlighting the contrast between the Geller family and Caroline’s own.

With music composed by Jeanine Tesori and book and lyrics written by Tony Kushner, Caroline, or Change is a sung throughout, covering a variety of musical genres, from Stuart Geller’s classical clarinet to soulful blues to the Supreme-esque girl band that appears as Caroline listens to her radio.

The cast certainly their heart and soul into the production. Sharon D Clarke takes on the title role and executes it flawlessly, her grief and bitterness are tangible as she struggles with raw emotion. She is joined in the basement by Bryan as the washing machine, Ako Mitchell as the Dryer and Dujonna Gift-Simms, Tanisha Spring and Keisha Amponsa Banson as the radio, at times, it all seems a bit bonkers as we get inside Caroline’s head, but it works!

Whereas Caroline worries about the change in the social and political climate (hang on… or does the ‘change’ refer to the loose coins in Noah’s pocket) the other members of her family embrace it, Abiona Omonua playing Caroline’s optimistic daughter gives a particularly strong performance.

I came out of Caroline or Change overall mightily impressed with the solid performances from the cast. Whilst I am aware that Caroline of Change wouldn’t be everyone’s cup of tea, it is bold, thought provoking and refreshingly different, it is definitely worthy of a night out.