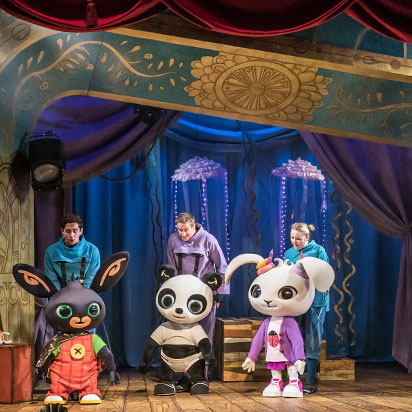 Bing is the number one top rated pre-school programme on BBC iPlayer, and has won many awards since it began in 2014. It is based on the books written by Ted Dewan about Bing – a pre-schooler bunny learning about the outside world with his friends Coco, Pando and Sula, while being watched over by their carers Flop and Amma.

This is the first ever Bing stage show, and is touring over 50 venues all around the UK. It is produced by Minor Entertainments, who have also previously adapted the well-loved In The Night Garden into a successful 10 year theatre show. Bing Live focuses on Bing and his friends learning all about theatre shows – the curtain, the spotlights, the applause. The show keeps Bingsters (yes, that is the term for Bing fans) engaged with fun, dressing up, songs, and dancing throughout.

One other small thing that might confuse your little Bingster is the voices. Obviously, Bing and his friends are not played by the original television programmes voice actors, and so some of the voices (particularly Bing and Pando) are drastically different to the television programme, and so it may be worth mentioning this to your little one beforehand to save on confusion and many, many questions!

The show runs for 75 minutes, and has a 15 minute interval so you have time to catch the toilet train and have a carroty bagel just like Bing!

There are a number of songs throughout the show, and each one is repeated several times so that your child (and you!) can really get to grips with the words and actions, and can join in….and continue singing it at home for the rest of the day!

Bing Live is the perfect show to introduce your child to the theatre for the first time, with characters they already know and love, they will literally be dancing in the aisles for the whole performance, enjoying every minutes, and that is what the theatre is really about.

As with the television programme, Bing and Flop recap what has happened at the end of the show. Sadly, unlike Minor Entertainments In The Night Garden, there is no opportunity to meet Bing and his friends after the show. Bing Live has been touring since June 2018, and has dates set around the UK until the end of April 2019.

Going to the theatre…it’s a Bing thing!