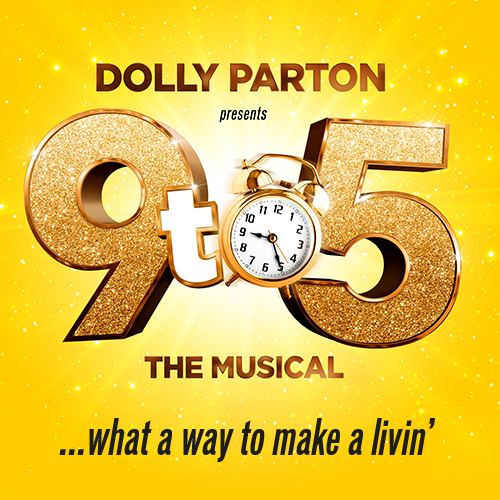 9 to 5 the Musical
Savoy Theatre, The Strand, London
Tickets Here

Forty years ago, a movie about three secretaries taking on their chauvinistic boss in a man’s world became a box office hit. Unusually (even more so in those days) the screenplay was written by a woman, as well as becoming a cult comedy 9 to 5 sent out a strong political message about women in the workplace and the way they were overlooked and treated.

Patricia Resnick who wrote the screenplay for the original 9 to 5 has now adapted it for stage and one of the film’s stars (the) Dolly Parton who titular theme tune has composed an entire score for the stage show which has recently opened at the Savoy Theatre directed by Jeff Calhoun.

9 to 5 the Musical keeps its 80s office setting, there are colourful costumes, big hair-dos and lots of 80s references giving it nostalgic charm yet it caters for the modern audience too with its fast pace and staging enhanced by digital backgrounds and projections.

If you had missed the point that Dolly Parton was involved in the project, there are plenty of reminders. Dolly features digitally throughout the show, introducing the characters, narrating and starting off the singing. Her Country and Western stamp is present in some of the songs, particularly in Backwards Barbie who is sung by Dolly’s originally character Doralee. Yet much of the score leaves C&W behind and is very at home in Musical Theatre giving plenty of scope for slick choreography by Lisa Stevens (yay, another female!) and great vocals.

The three protagonists who unwittingly give the office the shakeup it deserves are well played. Caroline Sheen who stepped into the show last minute when Louise Redknapp was injured, plays Violet the hard-working office manager always overlooked for promotion in favour of men. She plays the part with great confidence and skill and is instrumental in making the show the success it is, Redknapp has big shoes to fill when she returns at the end of March.

Natalie McQueen’s Doralee is sassy, sexy and misunderstood. Dolly is a tough act to mimic but Natalie gives it a jolly good shot. Was it necessary for Doralee to look like Dolly? I don’t know, but the imitation was recreated with aplomb by Natalie donning a Dolly-esque white-blond curly wig and extra padding.

Amber Davies may have been the wild card in the casting process, playing Judy the shy ‘new girl’ with no office experience who misses her Dick (now, now, that’s her HUSBAND who has left her), Davies has a little musical theatre experience and is more famous for winning ITVs reality series Love Island in 2017. Yet this is casting genius, not only will Amber bring in the younger audiences, she will wow them, she holds her own amongst a much more experienced company with ease and has earned her place on the West End stage.

Brian Conley plays Franklin Hart Jnr, ‘the boss’, unfortunately his role involves a fair amount of lecherous behaviour, unfortunately placing the show back in the 70s and 80s alongside the Carry On films, this simply isn’t considered funny anymore and some of the scenes felt uncomfortable. Conley is ultimately an entertainer though and makes us laugh with his physical comedy, stage presence and the occasional aside to the audience particularly at the end of act one.

For me, the highlight of the show belongs to Bonnie Langford playing the dowdy office worker (and office spy) who carries a torch for Hart. In her number ‘Heart to Hart’ she expressively declares her undying passion for him. I won’t give away what happens but here Bonnie undoubtedly proves why she is a theatrical legend!

It is a shame that the overall feel is that the story is a little outdated, honing-in on the comedy and double entendres, the show sadly misses the mark if it is trying to re-make a point about women in the workplace. However, 9 to 5 the Musical is cheesy beyond belief, a bundle of fun and well worth a visit.

this is an extraordinary year to be a woman in the West End. 9 to 5 the musical joins Waitress, Six and Emilia in blazing a trail of phenomenal female creatives and starring roles. Not only are women being respected, but they are kicking ass! Go ! Cannot wait to see what else is in store.

9 to 5 the Musical is playing at the Savoy Theatre in London and is currently booking until 31st Aug 2019. Tickets available here

9 to 5 the Musical has announced that a second production of the hit musical will play 11 cities throughout the UK and Ireland, opening at the Alexandra Theatre Birmingham on 6 September 2019, before visiting Manchester, Milton Keynes, Liverpool, Glasgow, Woking, Aberdeen, Cardiff, Sunderland, Edinburgh and Dublin.

One thought on “9 to 5 the Musical | Savoy Theatre, London | Review”