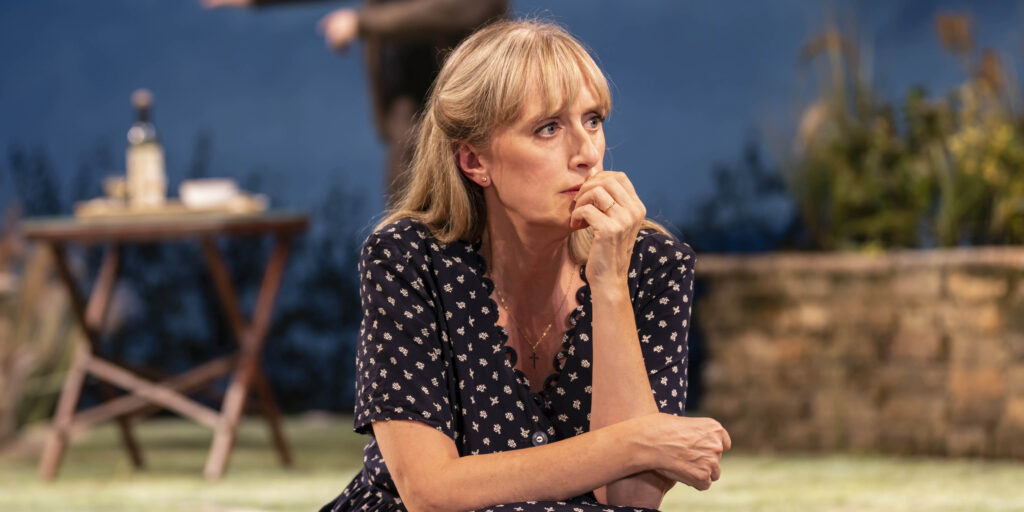 Having a ticket or two to see an Alan Ayckbourn play has always, to me, conjured up a delicious anticipation of spending a couple of hours in the midst of a crowd of rather silly middle class English characters creating an inordinate amount of joyous mayhem. A sort of Noel Coward meets a Brian Rix farce, only better and funnier. Usually it all comes right in the end. ‘Woman in Mind’ is in an entirely different category and although it was written in 1985, I was not familiar with it, my first Ayckbourn experience was the gloriously giddy trilogy ‘The Norman Conquests’, and was totally unprepared for this dark, rather shocking drama.

‘Woman in Mind’ is billed as a comedy drama, but although there are the usual wonderful Ayckbourn comic one-liners, there is much to be disturbed by in this play. Purposely, I did not read anything about the play beforehand and taking in the fantastically beautiful set of an English garden at the height of summer, with a backdrop of rolling countryside, blue sky and white fluffy clouds, I was expecting the Alan Ayckbourn I knew and loved. Any minute two giggly star-crossed lovers in the midst of an illicit affair would come running across the lawn. This stunning set makes full use of Chichester’s thrust stage bringing us right into what feels like a real garden on a real summer’s day, a simply gorgeous piece of work. Congratulations to Lez Brotherston (designer), Mark Henderson (lighting) and Simon Baker (Sound and Video); it was just perfect.

It is difficult to talk about this play without giving too much away, suffice to say that it centres around one woman who remains on stage for the whole performance, and her deteriorating mental state. Jenna Russell is a real tour de force and follows in the footsteps of such luminaries as Helen Mirren and Julia McKenzie. She plays a woman on the edge, middle class yes, no deviation there, but there is nothing frivolous or whimsical about her character, bar her appealing self-deprecation. She is married to Gerald, a stupid self-absorbed vicar who clearly understands nothing about women, least of all his wife. Played by Nigel Lindsay as a stereotypical old bore he fails to see his marriage and his wife falling apart, so intent is he on writing his parish history chronicles and indulging his clumpy Norah Batty type sister Muriel, played with more than a little venom by Stephanie Jacob. There is also a sullen remote son (Will Attenborough) who has just returned to the family after spending time with a cult where he’d completely cut off family ties. Now back home seemingly just to dump his emotional baggage on poor Susan, and being nastily hypercritical of her. I never really understood what he was about. These characters in the ‘real’ world contrast hugely with Susan’s alternative world where they are complete antitheses of her actual family.

‘Woman in Mind’ is essentially about mental health and a woman who desperately wants to love and be loved, and as she descends into despair and desolation her imaginary family increasingly becomes her reality. They come and go; her adoring and handsome husband, rather giddy but equally adoring beautiful daughter and dashing, engagingly mischievous brother exist as Susan’s fantasy family alongside the crushing awfulness of her real one.

What was rather confusing is whether the opening of the play – where Susan has just banged her head after tripping over a garden rake – is the cause of the manifestations which follow or whether it is a merely a symptom. Some things were not made clear, and this was one of them. What was startlingly clear though was how much Susan was suffering, which was both deeply affecting and all very relevant in 2022 with ever more marriages undergoing crises, and a focus on mental health. However the script felt rather dated and at odds with the modern world at times. Bill, the cheerful local doctor (very sympathetically played by Matthew Cottle), was ever present, tending to his patient, visiting every hour or so it seemed. Although rather lacking in real understanding, he came across as the only person who really tried to help Susan, without ever getting a true grasp of her deteriorating mental state. It is hoped that today things have improved.

One of the most poignant scenes showed Susan getting drenched lying at night in the garden in the rain trying to reconcile her two worlds, and her husband failing to recognise the desperation of the situation. Jenna Russell at last had the opportunity to demonstrate her dramatic range, a break from the rather level performance so far delivered.

This production was well constructed and carried the main theme extremely effectively, however as Susan descended into chaos, so did the play, and I really wish it hadn’t. The second half became totally unfathomable and the characters simply bizarre. I felt as though I’d fallen down the rabbit hole and ended up in Wonderland at the Mad Hatter’s Tea Party. It may to some represent a reflection of Susan’s mind, but it just lost plausibility to me, sadly.

Sir Alan Ayckbourn has written around 80 plays and I remain one of his biggest fans, always relying on him to deliver uplifting comic pieces with wonderfully amusing characters and dialogue. ‘Woman in Mind’ carries a very serious message and I’m happy to recommend it if only to keep this message in our own minds.