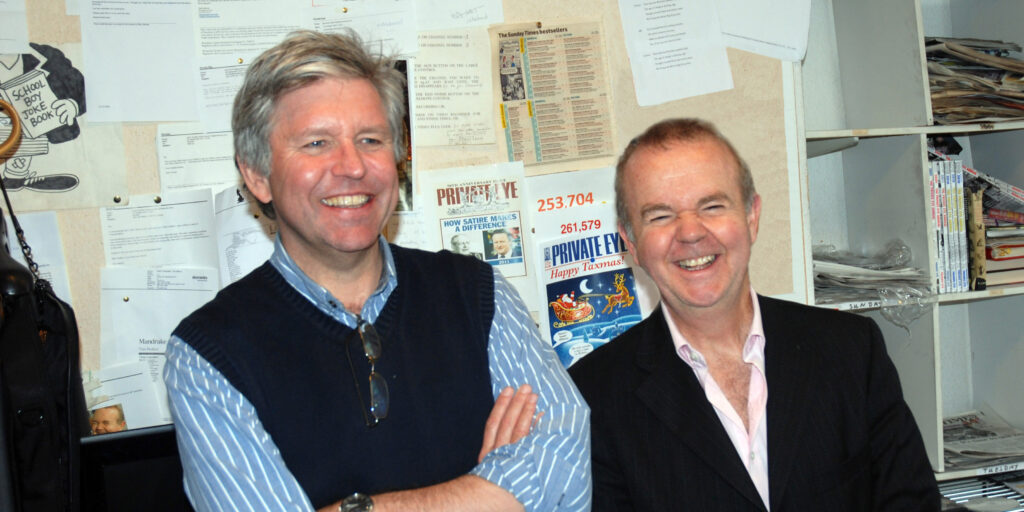 It’s 1950s austerity Britain, and out of the gloom comes Goon mania as men, women and children across the country scramble to get their ear to a wireless for another instalment of The Goon Show. While Harry Secombe and Peter Sellers get down to the serious business of becoming overnight celebrities, fellow Goon and chief writer Spike finds himself pushing the boundaries of comedy, and testing the patience of the BBC.

Flanked by his fellow Goons and bolstered by the efforts of irrepressible sound assistant Janet, Spike takes a flourishing nosedive off the cliffs of respectability, and mashes up his haunted past to create the comedy of the future. His war with Hitler may be over, but his war with Auntie Beeb –  and ultimately himself –  has just begun.

Will Spike’s dogged obsession with finding the funny elevate The Goons to soaring new heights, or will the whole thing come crashing down with the stroke of a potato peeler?

Spike, a new comedy about the life of Spike Milligan comes to the Theatre Royal Brighton next week. Written by Ian Hislop and Nick Newman we wanted to find out more.

Your play ‘Spike’ tells the story of the young Spike Milligan, coming out of World War Two and writing and performing with The Goon Show – which became a phenomenon. How did the play come about?

Nick Newman [NN]: We wanted to write something about Spike to coincide with the centenary of his birth –we didn’t quite hit that deadline, but we made it for his 104th! From the outset, we wanted it to be a celebration. There are too many biopics of comedians that tell the ‘tears of a clown’ story. And while you can’t escape Spike’s mental health issues, for us that was something that we saw as powering his comedy.

Ian Hislop [IH]: We didn’t want an audience coming out thinking, ‘the really important thing about this person is that they were miserable and unhappy. And now so am I!’. We wanted them thinking, ‘the important thing about this person is that he produced all this!’ and it made a huge number of people very happy. And still does. There are two very grim incidents in the play involving Spike having breakdowns, both of which he immediately turned into comedy. That in itself is fascinating.

Did you want to celebrate Spike because you were Goon Show fans when you were younger?

NN: Maybe. I remember when I was at school, just crying with laughter reading Spike’s war memoirs. And The Goon Show, I was brought up on it. My father was in the RAF and we were stationed in places like Singapore where there was no television. All we had to listen to was acetate recordings of The Goon Show. I can still quote chunks and bore for Britain.

IH: I’m a lot younger than Nick, so I didn’t hear them first time around. I missed out. The pleasure for me of making this play was Nick saying, ‘this is really funny. Genuinely funny and brilliant writing.’ And I went back and listened to it and was gobsmacked. I’d become so used to the older Spike, and the older Harry Secombe and Peter Sellers, that I’d forgotten that when they first came along, they’d just been demobbed, they were really young men, and they blew the place away.

And the people in charge at the BBC couldn’t bear it. They had no idea what this group were doing, and they wanted to shut them down, basically. They thought they were noisy and anarchic and up to no good. All of which was true: that’s what made them so attractive. So for me the challenge with the play was: can we bring all that to life onstage?

And that’s what the play depicts: the battles between Milligan and the BBC?

NN: When we first began writing, we managed to get hold of a great cache of correspondence between Spike and the BBC, and from BBC management about Spike. And that gave us the backbone of the story. Because it was quite clear that Spike, having been fighting Hitler and Mussolini for five years, went into the BBC and started fighting them. It was a continuation of war by other means.

IH: Spike always hated the BBC. He was furious that they didn’t pay him enough money and didn’t respect him and were trying to get rid of him. There was something about institutions that he found incredibly annoying – but also productive and comforting. He wouldn’t have been who he was without them. After all, the BBC gave him two brilliant producers, who made the anarchic mess that was the Goons into one of the greatest radio programmes ever. So they both enabled and frustrated him.

NN: Some of it was class warfare, I think, because Spike was working-class. As you can tell from his war memoirs, he didn’t have time for the officer class. And of course, after the war, all these officers went straight into the BBC and ran it. So Spike was at loggerheads with them on that basis.

As we’ve tried to reflect in the play, the BBC management were always saying: there’s too much in The Goon Show about the war, it’s too noisy, there are too many explosions. And this was Spike exorcising his demons. One critic described the Goons as being “like shell-shock on radio”, and that says it all. That was Spike’s experience: he was shell-shocked. And he carried on reflecting that in his work.

IH: It’s interesting, because we tend to think of the 1950s as being incredibly deferential and then luckily along came satire in 1961 and everything changed. But that’s not how it happened. The great satirists Richard Ingrams and Peter Cook were huge Spike fans. When I took over as editor of Private Eye, [previous editor] Ingrams said to me ‘Spike Milligan will write in letters. Just put them in! He’s a genius.’ And Michael Palin, who we worked with on our film  The Wipers Times, said to us, ‘People say Monty Python was very influenced by The Goons. And yes: it was!’

IH: I don’t think they saw those things as separate in the way later historians did. Spike was just doing topical comedy. In 1954, the BBC produced a landmark TV version of George Orwell’s ‘1984’ . The Goon Show almost immediately produced an episode called ‘1985’, taking the mickey out of the ‘Big Brother Corporation’. It was the same with the Coronation. They did a whole episode about it. It’s not like ‘oh, what’s this mad world that the Goons created?’ It’s your world! It’s the one that’s going on in front of you.

NN: In the play, we show how satirical Spike was. There were conflicts with the BBC about Peter Sellers doing an impression of the Queen. The BBC hauled Spike in and said ‘you can’t parody the Queen!’ Nobody had done that before: a direct satire of the monarchy. The BBC thought everyone was going to get put in the Tower. But then three years later, Prince Philip invited the Goons to be his representatives in the Cambridge tiddlywinks competition.

IH: Prince Philip clearly thought the Goons had delivered a very amusing representation of his wife. Which endeared him to me.

NN: In the correspondence we read, which the play dramatises, the BBC are complaining that the Goons’ endless jokes about the war are insulting to the memory of the people who fought in it. So of course Spike turned around and said ‘We all fought in the war!’ If you read his war memoirs, they’re full of people making jokes about the grimmest situations. There’s this account of Spike just before he gets blown up at Monte Cassino, crawling up a gully and being bombed by the Germans. He comes across a rock onto which someone has chalked a sign saying ‘World War Two: this way’, and an arrow. And you think: in the midst of death, that is quite funny.

Did doing it live, in a theatre, help you get closer to the spirit of the Goons’ work?

IH: When you put something onto the live stage, you can bridge the gap to the audience and have real fun with it…

NN: …because when they recorded it, they were endlessly ‘corpsing’- laughing uncontrollably and breaking the fourth wall. The BBC got so annoyed. They said, ‘you sound as if you’re having more fun than the audience.’ And they said: ‘We are!’ We’ve tried to reflect that on stage by also breaking the fourth wall. When you see the play performed live it does remind you that Spike always had an imaginary audience in his head.

IH: He was never happier than with an audience. Being a tortured writer on his own, that was the downside. For Spike, the great bit was rehearsal and then performance. Or the TV chat shows, on which he was such a great performer. Spike would be on anything. He just loved it. So we needed an actor who would understand that, who really wanted to get the laughs.

NN: There is a responsibility to try and get it right. Because the Milligan family came to see the play, their reaction was very important to us. Jane Milligan came up to us after the show and said ‘That was my dad on stage!’ That felt fantastic. Because the family want Spike’s legacy to be that he was very, very funny. And so do we.

We have a lovely speech at the end of the play, a little paean of praise from Harry Secombe to what it was like working on the Goon Shows. Every time I hear it performed, it brings tears to my eyes. Because it’s exactly what my memory of the Goons is. Just wishing every day was a Sunday. Soaring on the thermal gusts of Spike Milligan’s imagination. Reflecting that is everything we wanted to achieve with the play.

IH: Secombe was the one who saw what fun they were having, who genuinely appreciated it, and tried to keep the peace with the other two so it didn’t all break up. You know, millions of people listen to them every week. Every Sunday they’d go into the studio and have an enormous amount of fun, and then go out to the pub afterwards and have a laugh with people who loved them. What bit of that isn’t right?! We wanted to get that feeling across.

Is it part of your ambition with the play to introduce Spike’s work to new audiences? IH: Yes,  I think that’s fair. There’s nothing quite as much fun as hearing a joke delivered to a modern audience that was written 100 years ago, in the case of The Wipers Times, or with the Goons, 50 year ago. And hearing today’s audience roar with laughter. You just think: that’s fabulous. That is incredibly pleasing.

Book tickets to see Spike at the Theatre Royal