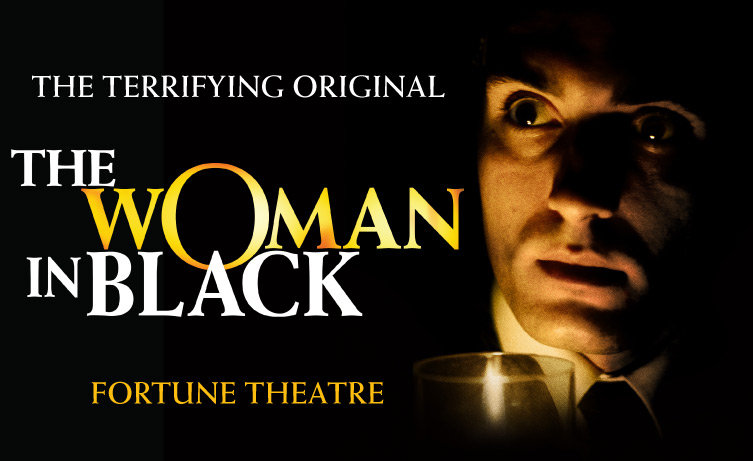 The Woman In Black

On the eve of National Ghost Hunting Day I was thrilled to be invited to the Fortune Theatre together with other theatrebloggers to see one of the longest running plays in the West End, The Woman in Black.

Before the show the bloggers were greeted by paranormal expert, Dr B. Vilder, who guided us on a backstage tour of the compact 400 seat theatre telling tales of eerie and unexplained phenomena. This all set the scene perfectly for the evening’s chilling entertainment.

The Woman in Black opened at the Fortune Theatre 28 years ago and continues to draw the crowds to this day. Interest in the play was no doubt revitalised with the 2012 blockbuster film starring Daniel Radcliffe. Thankfully the stage version is less terrifying than the movie yet maintains the intrigue and suspense of Susan Hill’s original novel.

Stephen Mallatratt’s ingenious adaption is a play with only two actors, Arthur Kipps (Terence Wilton), an elderly gentleman eager to offload a story from his past that has haunted him for years, enlists a young actor to help. The actor (James Byng) then plays the part of Kipps as a young man and all the supporting characters are played by the elder Kipps.

The play is slow to get going as the actor persuades Kipps that he needs to act to make his voice heard and that the audience will be able to use their imagination to see Eel Marsh house. Before long though with the use of Kevin Sleep’s extremely clever lighting techniques the audience is transported between the past and the present, and slowly the tension builds until you are at the edge of your seat gripped with suspense, waiting for the next fright.

Directed by Robin Herford, The Woman in Black is an excellent example of what can be achieved with just two actors, a small stage, minimal props and scenery and a bucketful of suspense. A perfect treat for a winter evening and with ticket prices that won’t break the bank this is one to watch – if you dare!

Buy tickets for The Woman in Black here

One thought on “The Woman in Black | Fortune Theatre | Review”