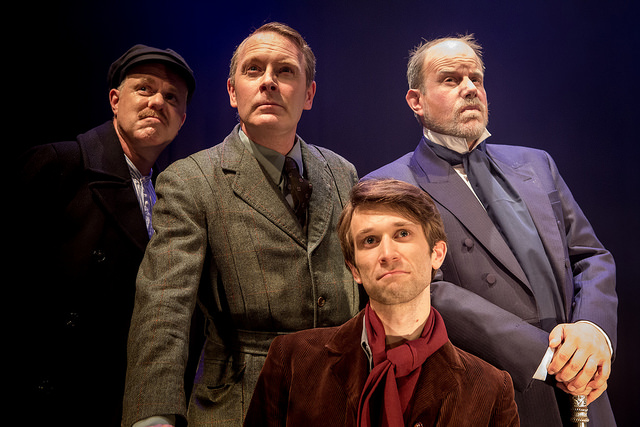 A Heartwarming Tribute To A Beloved County

The stories of Sussex retold, the legends, the myths, the truths and the experiences of Hilaire Belloc all come to life in this wonderful play that revives the history of a fascinating county, unearthing tales that have been long forgotten.

It’s hard not to fall in love with a story that shares so much knowledge of times past, mixed beautifully with genuine human interaction between The Four Men.

The story begins with Hilaire Belloc as “Myself’ setting off on a four day journey across the Sussex Downs, but before he leaves he encounters three fascinating characters, all of whom join him on his adventure; Grizzlebeard, A Sailor and A Poet, all aptly nicknamed as their real names do not tell the stories of their lives. The direction from Nick Young, who previously directed at the Connaught Theatre when it used to be home to a repertory company, is superb and the characters are vivid and brought to life magnificently.

The bond is formed early on and as the journey is afoot the characters reveal more and more about their pasts, and the stories of the land in which they travel, growing the bond between the audience, the characters and the environment they find themselves in. 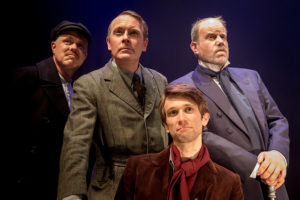 A simple set design by Laura Kimber is used to great effect, staging the transitioning worlds of the great outdoors on the Downs with the various Inns and pubs they visit along the way. In fact, across the story they travel 92 miles in four days, and consume 300 pints of beer!

The cast were born to play the roles they were given on stage. Ross Muir played the lead with clarity, empathy, and a genuine sincerity that was a joy to watch. David Stephens who played Grizzlebeard was rich in wisdom, Lee Payne who played the Sailor was outrageous and hilarious, whilst Jake Snowdon brought a real youthful energy to the production as the Poet, with excellent Ukulele-playing skills!

If you’re considering going to see The Four Men, you can expect hearty songs, insightful stories and genuinely funny moments throughout. Ann Feloy must be commemorated for adapting such a classic text and giving it a new dimension on stage.

My only criticism is that the length of the play was longer than expected, however as it is the opening of the tour I have no doubt that they will refine it going forward and will flourish even further at all of the forthcoming venues they perform at.

It has left me with a huge curiosity to learn more about the history of Sussex, the county I live in, and read more into Hilaire Belloc’s treasured texts.

Well done to everyone involved for creating a heartwarming and insightful production. It is a real joy to experience, and with that I shall leave you with a Belloc Quote…

“I believe we should recover, while they can still be recovered, the principle joys of the soul”