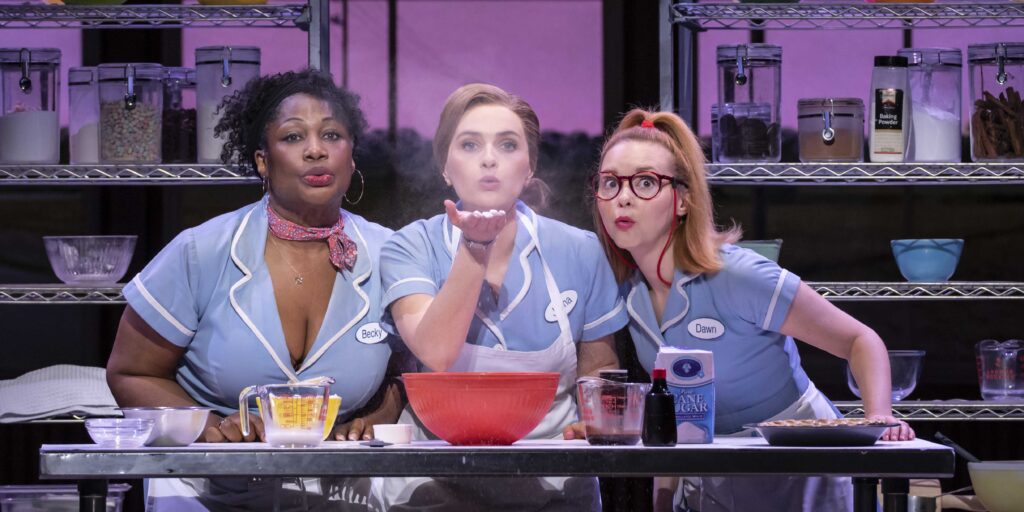 What are the ingredients of a good musical?

After a successful run in the West End, Waitress the Musical has been touring the country since pandemic restrictions were lifted. With much of the London cast still performing, Waitress is like a delicious tried and tested recipe.  Nearing the end of its tour it plays at the Theatre Royal in Brighton to rapturous applause this week.

The story is set in a diner where downtrodden pregnant Jenna pours her soul into making pies for the customers. Unsure whether she wants the child she finds solace in her friends and in the most unlikely of places.

Chelsea Halfpenny dons Jenna’s apron and brings a real warmth to the role. She captures Jenna’s fears and anxieties yet portrays her yearning for something more. Her superb rendition of ‘She used to be mine’ sensitively pulls at the heart strings. Her colleagues at the diner are the opinionated Becky and the shy lonely Dawn played by Wendy Mae Brown and Evelyn Hoskins respectively. Each play their characters brilliantly capturing their different outlooks in life whilst maintaining a bond between them.

The supporting characters are just as strong, David Hunter plays Jenna’s gynecologist who once he tastes Jenna’s pie (ahem) doesn’t look back. George Crawford as Ogie uses all his gawky charm to woo Dawn as he claims he ‘loves her like a table’ and as a polar opposite Tamlyn Henderson darkens the mood and as he plays Earl, Jenna’s needy abusive husband.

The all female creative team ensure that the women have a strong voice throughout the show. By creating very different character leads they try to cover all bases. Director Diane Paulus has created a slick production with award winner Sara Bareilles providing an incredible vibrant score with many notable ‘ can’t get ‘em outta your head’ tunes.  Jessie Nelson’s book has surprising twists and turns throughout the show yet the predictable ending is a little disappointing although Lorin Latarro’s choreography is sublime, particularly with her ingenious use of the ensemble during the ‘baking’ scenes.

Waitress is a show that not only has plenty of food for thought but is also filled with plenty of fun and laughs. It is a lovely touring production  that will not only leave you with a smile on your face but will keep you wanting just one more slice of banoffee pie.