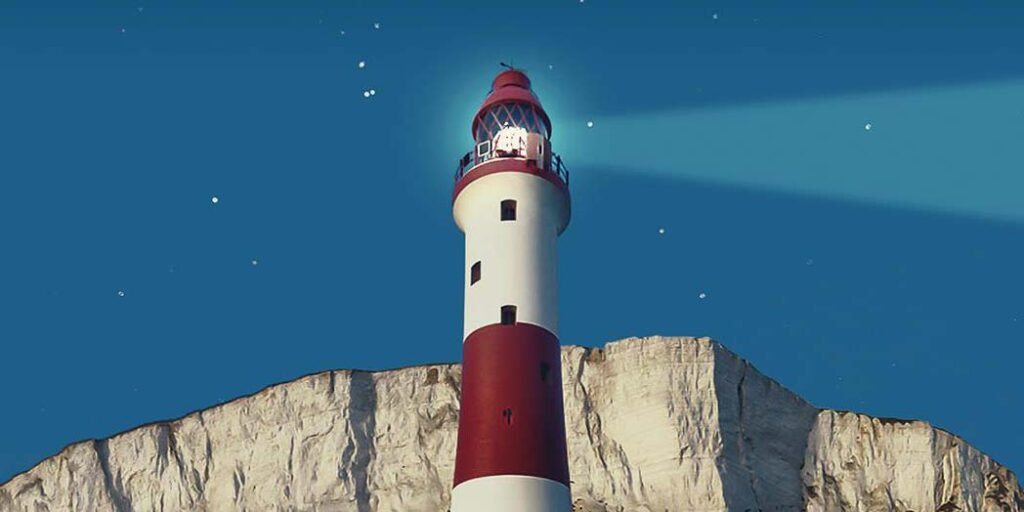 This extremely emotive play is set upon Beachy Head only a few feet away from the cliff edge with its stunning views much sort after by tourists but also hiding a much more sinister side as a place of loneliness and anguish.

Julie (Moira Brooker) has a rundown ice-cream van and is concerned sales are not what they used to be due to a rival selling cappuccino. But like the beam from the lighthouse Julie is a beacon that draws in Bernard (Stephen Pinder), once homeless with a difficult past who pops along just for the company and Skye whose arrives for the summer leaving her troubles behind. Skye (Polly Jordan) is a romantic who dreams of becoming a lighthouse keeper while helping Julie in the van. Bernard is lovable but sad and secretly in love with Julie who herself is lonely and looking for love online. All three know things must change for the future, though before that can happen, they need to confront the ghosts of their past.

Tabitha Mortiboy has cleverly written Beacons in such a way with a sprinkling of humor and hope that it becomes very easy for the audience to quickly start to feel immersed in the characters lives. However, this is set at Beachy Head and by night Julie voluntarily patrols the cliffs looking for those in despair. The production is sensitively directed by Samuel Clemens making the taboo subject of suicide a reality in the minds of the audience. The moving photographic backdrop makes you feel as though you are almost on the cliff top too experiencing the dramatic and terrifying heights.

But I hasten to add this is a tale primarily of friendship, love and genuine human kindness and without giving anything away, the play ends on a satisfyingly happy note.

Remember to take some cash with you as there is a collection on the way out for the sterling work done by Beachy Head Chaplaincy.