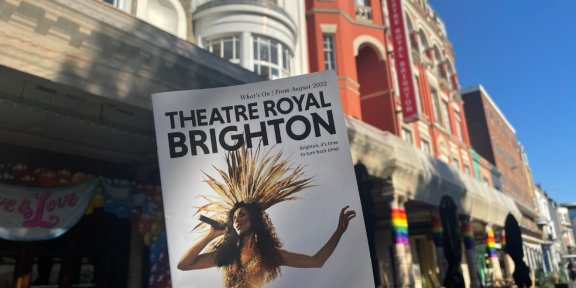 Theatre Royal Brighton’s brand new What’s On Guide is out now! Packed with top quality entertainment, there’s a fabulous choice of shows from dazzling musicals to gripping dramas to side-splitting comedies and family-friendly shows. With something for all ages and artistic tastes, audiences will be spoilt for choice.

The season opens with a pre- West End production of The Doctor, starring Olivier Award-winner Juliet Stevenson. The star-studded drama continues in September with The Best Exotic Marigold Hotel starring Academy Award winner Hayley Mills alongside Paul Nicholas and Rula Lenska. Followed by visits from Felicity Kendal, Matthew Kelly and Tracy-Ann Oberman in Noises Off, as well as Todd Carty and Gwyneth Strong in the 70th Anniversary tour of The Mousetrap in October.


Thriller audiences can look forward to the return of An Inspector Calls in November, on it’s 30th anniversary tour,as well as the next installment from Peter James, Wish You Were Dead, coming up next spring.

Musical Theatre fans will delight in first visits from The Osmonds: A New Musical and The Cher Show which promises to be a dazzling glitter-fest of flamboyant glory. As well as the return of Richard O’Brien’s Rocky Horror Show in the new year!

In December, audiences will be roaring in the pews at the fiercely hilarious, all-drag killer comedy, Death Drop Back in the Habit, following on from the West End smash hit success of Death Drop. Death Drop Back in the Habit will be followed by Jurassic Live, an immersive dinosaur experience live on stage between Christmas and the New Year – guaranteed to be a roar-some experience for the whole family. Peeking ahead to the new year, children will be delighted to see Hey Duggee The Live Theatre Show visits Brighton in February.

THE DOCTOR – 5th-10th Sept
Juliet Stevenson stars in “Britain’s best director” (Telegraph) Robert Icke’s sold-out, five-star Almeida Theatre production. On an ordinary day, at a private hospital, a young woman fights for her life. A priest arrives to save her soul. Her doctor refuses him entry. In a divisive time, in a divided nation, a society takes sides. Freely adapted from Arthur Schnitzler’s Professor Bernhardi, The Doctor is a “provocative, wonderfully upsetting” (Independent) whirlwind of gender, race and questions about identity, “one of the peaks of the theatrical year” (Guardian), and a “devastating play for today” (Financial Times).

THE BEST EXOTIC MARIGOLD HOTEL – 20th-24th Sept
Based on the Sunday Times bestseller which inspired one of this century’s most treasured films, The Best Exotic Marigold Hotel takes us on a journey to India with an eclectic group of British retirees as they embark on a new life. Starring Academy Award Winner Hayley Mills, Paul Nicholas and Rula Lenska, The Best Exotic Marigold Hotel is a joyous comedy about taking risks, finding love and embracing second chances, even in the most surprising of places.

THE OSMONDS: A NEW MUSICAL – 27th Sept – 1 Oct
Directed by Shaun Kerrison and choreographed by Olivier Award-winning Bill Deamer, The Osmonds: A New Musical tells the official story from Jay Osmond about the five brothers from Utah who were pushed into the spotlight as children and went on to create smash hits decade after decade, as one the world’s biggest ever boybands.

SPIKE – 11th-15th Oct
SPIKE is an absurdly funny new play by Ian Hislop and Nick Newman (The Wipers Times, Trial By Laughter, A Bunch of Amateurs) that delves into the inner workings of one of our most unique and brilliantly irreverent comedy minds, Spike Milligan. “If you liked the Goons you will love it” – Sunday Times. Starring Robert Wilfort (Gavin and Stacey, Bridgerton), Patrick Warner (Peter Cook in The Crown, One Man, Two Guvnors and Play that Goes Wrong), Jeremy Lloyd (The Comedy About a Bank Robbery, Trial by Laughter), Margaret Cabourn-Smith (Motherland, Miranda, Buffering) as Janet.

NOISES OFF – 18th-22nd Oct
One of the greatest British comedies ever written, starring one of our best-loved stage and screen stars, Felicity Kendal alongside Matthew Kelly, Jonathan Coy and Tracy-Ann Oberman. Michael Frayn’s celebrated play serves up a riotous double bill – a play within a play. Hurtling along at breakneck speed, Noises Off follows the on and offstage antics of a touring theatre company as they stumble their way through the fictional farce, Nothing On.

THE MOUSETRAP – 24th – 29th Oct
Agatha Christie’s The Mousetrap is the world’s longest-running play. This thrilling West End production is THE genre-defining murder mystery from the best-selling novelist of all time… case closed! For almost 70 years, The Mousetrap has kept millions of people from every corner of the globe on the edge of their seats. COULD YOU BE NEXT?

THE CHER SHOW – 1-12th Nov
The Cher Show tells the incredible story of Cher’s meteoric rise to fame, flying in the face of convention at every turn. This HUGE new production features a fresh take on her show-stopping costumes which earned her the title of “the ruler of outré reinvention” (VOGUE). Three West End stars play Cher as we span her iconic career: Millie O’Connell (SIX, RENT) as BABE, Danielle Steers(Bat Out of Hell, SIX) as LADY and the Olivier Award nominated Debbie Kurup (Prince of Egypt, The Bodyguard) as the ultimate diva, STAR.

AN INSPECTOR CALLS – 15th-19th Nov
Stephen Daldry’s multi award-winning National Theatre production of JB Priestley’s classic thriller returns. written at the end of the Second World War and set before the First, An Inspector Calls is a compelling and haunting thriller and the most internationally-lauded production in the National Theatre’s history.


THE LAVENDER HILL MOB – 21st-26th Nov
Come and see one of the “greatest British films of all time” (BFI) brought to life on stage by Olivier-nominated playwright Phil Porter, directed by Tony and Olivier-nominated Jeremy Sams and starring acclaimed comic actors Miles Jupp (A Very British Scandal, Mock The Week, and Why Didn’t They Ask Evans) and Justin Edwards (The Thick of It, 1917 and The Ferryman).

DEATH DROP – BACK IN THE HABIT  – 13th-24th Dec
Following three sold-out West End runs and a smash hit UK tour, Death Drop Is back! The drag murder mystery sensation is returning with a divinely hilarious new murder mystery. Death Drop Back in the Habit sees a gaggle of fabulous Nuns trapped in their convent with a serial slayer slashing their way through the sisters. As clues are unearthed by Sis Marple, you’ll be laughing in the pews as this hilarious, fierce, all-drag killer comedy comes to it’s thrilling and uproarious conclusion. Casting to be announced.

JURASSIC LIVE  – 27th-30th Dec
Join Jurassic Live for a roar-some adventure. This educational stage show features mind-blowing special effects, professional puppeteers and the UK’s most realistic dinosaurs. Aimed at the whole family, from 2 to 102, this comedic and thrilling new family-fun stage adventure follows a team of dino rangers on the hunt for a missing baby dinosaur.

HEY DUGGEE THE LIVE THEATRE SHOW   – 7th-8th Feb 2023
Squirrels, get ready! Everyone’s favourite big, lovable dog, Hey Duggee is touring for the first time ever and here’s your chance to see him! Hey Duggee The Live Theatre Show is going to be huge and will feature Duggee, the Squirrels, plus many more of your favourite characters!

VARNA INTERNATIONAL BALLET – 13th-15th Feb 2023
Founded in 1947 and currently celebrating their 75th anniversary, the critically acclaimed Varna International Ballet comes to the UK for the very first time with Giselle, The Nutcracker and Swan Lake. Renowned for its award-winning soloists and magnificent corps de ballet, the company has been delighting audiences for decades at home and abroad with its performances of the highest quality.

NOUGHTS & CROSSES  – 21st-25th Feb 2023
Sephy and Callum sit together on a beach. They are in love. It is forbidden. Sephy is a Cross and Callum is a Nought. Between Noughts & Crosses, there are racial and social divides. A segregated society teeters on a volatile knife edge. This gripping Romeo and Juliet story by acclaimed writer Malorie Blackman is adapted by Sabrina Mahfouz and presented by Pilot Theatre. Noughts & Crosses is a captivating drama of love, revolution and what it means to grow up in a divided world.

FISHERMAN’S FRIENDS – THE MUSICAL – 7th-11th Mar 2023
The true story of the world’s most unlikely buoy-band. When a group of Cornish fisherman come together to sing the traditional sea shanties they’d sung for generations, they hoped to raise a few quid for charity. Nobody, least of all them, expected the story to end on the Pyramid stage of Glastonbury… Fisherman’s Friends is a brand-new musical based on the true story of the Cornish singing sensations, and the hit 2019 film. “Unfettered joy and warmth” – Cornwall Live

WISH YOU WERE DEAD – 20th-25th Mar 2023
Following on from five hit stage shows and the new acclaimed ITV series ‘Grace’, the work of best selling author Peter James returns with the world premiere stage adaption of Wish You Were Dead. when Detective Superintendent Roy Grace and Cleo Morey take their first holiday together, Cleo hopes that she will finally get Grace to herself for a few days and away from his crime solving exploits. But their dream escape turns out to be the holiday from hell, as the past comes back to haunt them.