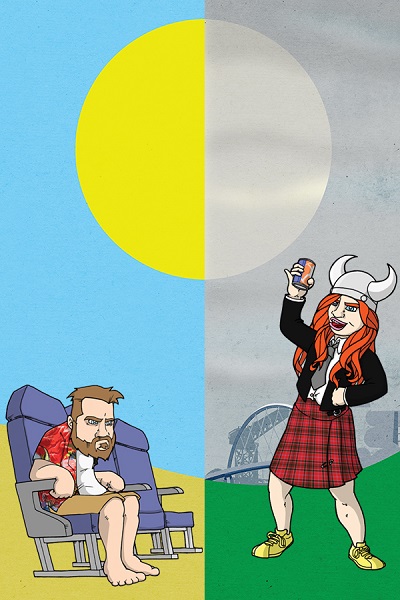 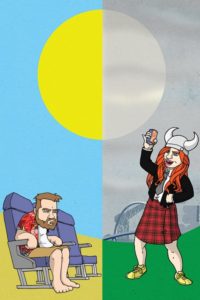 The We Plays, cleverly and poetically written by Andrew Maddock, consist of two separate monologues from two very different characters. Both show the audience that you should never judge someone until you know their story.

There are strong performances from both actors and the use of rhyme and the repetition of some of the lines through both monologues is both clever and effective. 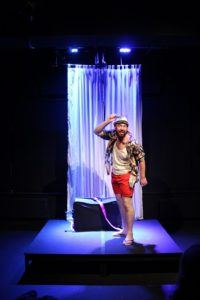 The first (Cyprus Sunsets) shows a guy (played by John Seaward) who is reliving the memories of Cyprus by returning alone, after the end of a long term relationship. He begins by getting nostalgic about the boys drunken trips in the past that sound like the usual Brits abroad routine. He also is very judgemental about the family from the plane that he also gets stuck with in the next room at his hotel.  However he soon reveals a deeper, more caring character, when his true story unfurls and it becomes an emotional odyssey for him with help from the previously mentioned dodgy family next door. He takes the audience along with him on this emotional trip, that gives you a whole new perspective on his character by the end of the tale.

The second piece (Irn Pru) features a strong feisty, Scottish young woman (played by Jennifer O’Neill) who for some reason wears a Viking helmet to stand out from the crowd. She hasn’t had a very good job history and has just lost her position at a local cafe, due to the opening of a new Waitrose. Her hero is Michelle Mone, (Ultimo bra milionairess) who is constantly dispensing wisdom in her ear. She starts out tough, opinionated and possibly unlikeable but we soon see how her bravery is masking her disappointment in life and the lasting effect of the bad things that have happened to her. You are left at the end with more of a feeling of empathy for her as a result. 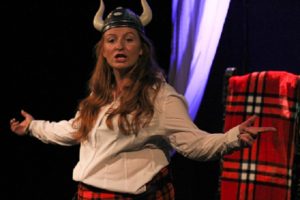 The We Plays at the Hope Theatre, runs until 15 October 2016. Recommended for over 18s only.