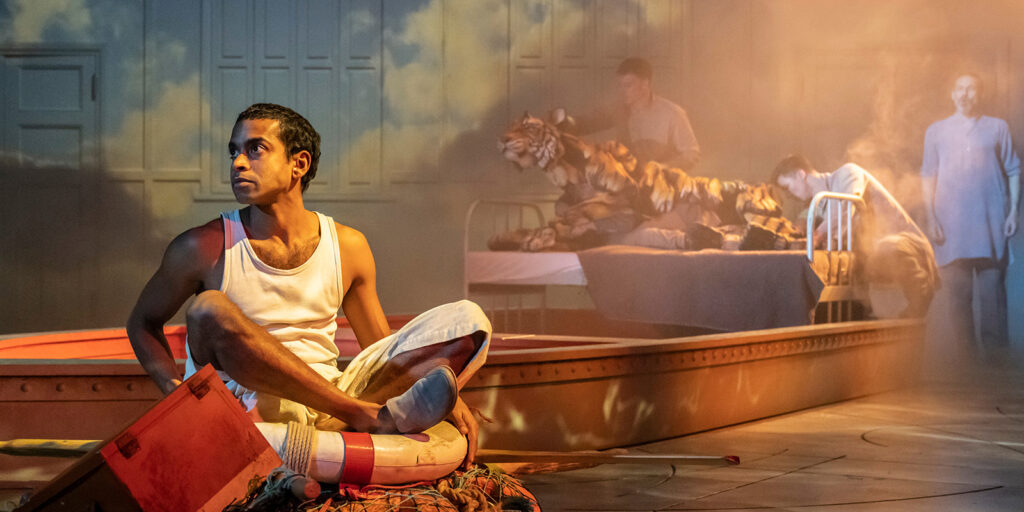 Life of Pi is a Canadian philosophical novel by Yann Martel published in 2001. The protagonist is Piscine Molitor “Pi” Patel, an Indian boy from Pondicherry who explores issues of spirituality and metaphysics from an early age. He survives 227 days after a shipwreck while stranded on a lifeboat in the Pacific Ocean with a Bengal tiger which raises questions about the nature of reality and how it is perceived and told. The novel has sold more than ten million copies worldwide after it was rejected by at least 5 London publishing houses.

In 2012, the film version directed and produced by Ang Lee was released and then 7 years later the stage adaptation by Lolita Chakrabarti premiered at the Crucible Theatre, Sheffield before transferring to the Wyndham’s Theatre in London‘s West End in November 2021.

In her version, Chakrabarti begins the story with Pi’s meeting in a Mexican hospital in 1978 with a rather dull man from the Japanese Ministry of Transport who is investigating why the ship sank and what happened afterwards. So, the journey starts in a drab, grey hospital room which is transformed when Pi starts to tell his tale. What follows is an absolute treat of imaginative effects, bringing to life the apparently unstageable, with skill and stunning beauty. Hats off to Tim Hatley’s exquisite design, Nick Barnes and Finn Caldwell’s outstanding puppets (puppets are clearly in vogue at the moment with very few new productions not enlisting their help to dramatise animals and the such), Tim Lutkin’s terrific lighting and composer Andrew T. Mackay’s haunting music which effortlessly fuse together to create the colourful Indian market, the cargo ship Tsimtsum and in particular, the vastness of the Pacific Ocean.

Acting honours go to Nuwan Hugh Perera who is nimble-footed and splendidly eccentric as Pi and Nicholas Khan as Pi’s authoritative father who takes the decision to leave India (it’s 1977 when a state of emergency had been in place since 1975 declared by Prime Minister Indira Gandhi) and resettle in Canada.

This is a wonderful production although it is less the story of a boy and his growing bond with a tiger stuck aboard a lifeboat and more an exploration of faith, doubt, and the nature of story itself and how it can be whatever we want it to be.