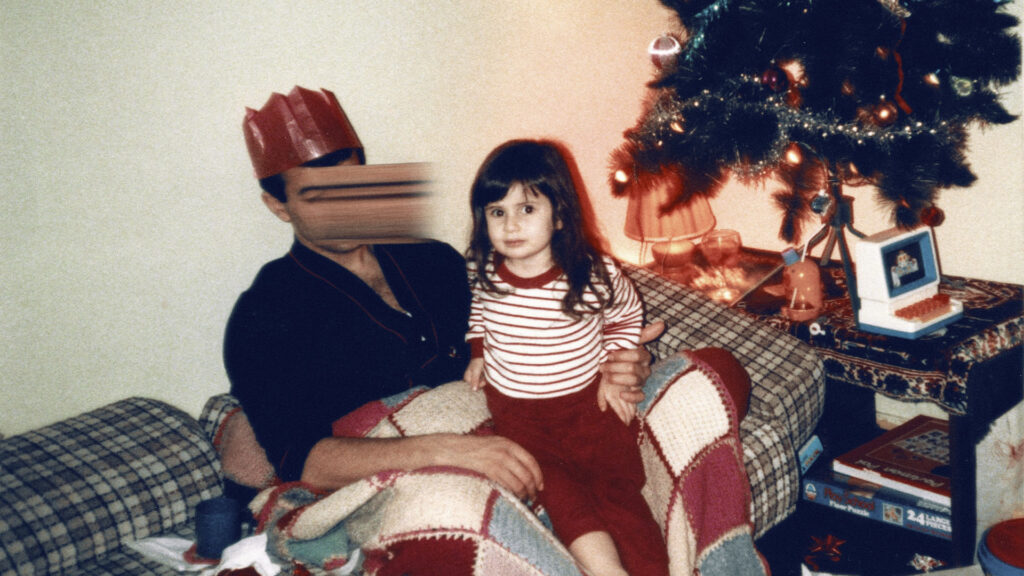 Jasmine Naziha Jones’ semi-autobiographical debut play Baghdaddy, which she also performs in, opened at the Royal Court Theatre recently and runs until the 17th December.

What is Baghdaddy about?

Baghdaddy explores my childhood memories of the Gulf War and the occupation of Iraq and reconciles them with an adult understanding of what my dad endured watching the horror unfold from the safety of our home in the UK. It’s told through the eyes of Darlee, who ages between 8 and 22 in the play, she is assisted on her journey by three spirits who force her to make sense of the memories.

How personal is this play?

It is an incredibly personal piece so it feels like a vulnerable thing to do, I’m really putting my heart on the line. There is truth in every scene, all of it is made from my memories, or stories that I’ve been told by my dad and other family members. I have used some dramatic license to make it more theatrical and entertaining, but truth is at the heart of it.

How do you feel about your family seeing the play?

They are all really proud and I think they all recognise it as an important piece of art. My sister, who has a very similar second generational point of view to me, was very moved by the text and felt it was a story that urgently needed to be told.

For my Dad, I think reading the play did open some old wounds. It will be a difficult watch for some people, but I’ve worked very hard to do no harm and try to be as truthful and nuanced  as possible. I gave my Dad the text to read first, so there’ll be no surprises

What made you want to write this story?

The play began its life as a response to A History of Water in the Middle East by Sabrina Mahfouz, which was also on at the Royal Court. I was so galvanised by what I’d seen, I just had to write something. As the saying goes: “if you can see it you can be it”, and I just felt angry. I went home and wrote the first 10 pages of Baghdaddy. I didn’t know I needed to write it until I’d seen her play.

How do you think the play will resonate with other second generation immigrants?

When I was writing this play I realised I’d never had any place to grieve over about what happened in Iraq, what my Dad went through and what happened to my family. I had nowhere to process these feelings, so I found writing the play very cathartic. I think it’s very common for second generation immigrants to secretly process the grief of our elders; it’s confusing and lonely because on the one hand we have the privilege of safety but on the other the shockwaves of trauma resonate through our lives. I really hope other second generation immigrants will come and watch the play and also, maybe, use it to find a way to look back and see creativity as a way to take back control.

Did you write the play with yourself in mind as an actor?

No not at all! It would have been a very different play if I had written with myself in mind. It wasn’t until later on, after having a frank conversation with my sister, that I decided to be in it. We spoke about how I needed to protect these words, and how important getting an Iraqi woman to say them was. But initially I was writing with a sense of detachment – I had to for my own sanity, the topic was so enormous I didn’t need the added pressure of framing myself as an actor within it.

Now you’re in rehearsals, is it easy to stop thinking as a writer and throw yourself into the acting?

I’ve been really lucky because I’ve had quite a long time to sit with the play and a lot of support and feedback. I was many drafts in by the time we got to rehearsals. My radar as a writer has been on in the rehearsal room, but mainly for the rhythm or things and where cuts may need to be made.

How has being an actor affected your process as a writer?

So helpful! You think theatrically already. I say everything out loud in my room and if I find it cringy, then it is going to be a problem for an actor too.  I’ve had the chance to work with some inspiring directors and playwrights, so I bring that influence to my writing too. I think I have empathy for everyone bringing this production to life. It takes many brilliant brains to make a show.

What has working with the director, Milli been like?

I’ve been so lucky with Milli, we’ve been on the same page from the start. She is incredibly collaborative. There hasn’t been a bump on the road at all and I totally trust her. Even though we aren’t from the same cultural background, there are similarities and I think that is really important because there is something shared in our bones. There is a level of experience and understanding between us which is really great.

What should people expect from Baghdaddy?

It is ambitious theatrically, this is not a conventional piece of theatre at all. It plays with form, it’s not linear and it is quite destabilizing. It’s funny, then serious, and then heart breaking. It is a real rollercoaster. I think there is a relationship with the audience, a certain level of self awareness and an energy that you might not get in other plays.

Why should people see the play?

I want audiences to be enlightened to a very private behind closed doors perspective on of something we are still feeling the effects of in this country today, but we never hear about. I hope they’ll be let in on the far reaching impact of war and colonialism on every modern British life. It aims to be entertaining too though! The content is hard and sad, but the line between sorrow and humour is thin. I hope the play will stay with them out into the wider world. There is something in this play for everyone. I want as many people as possible to see it.