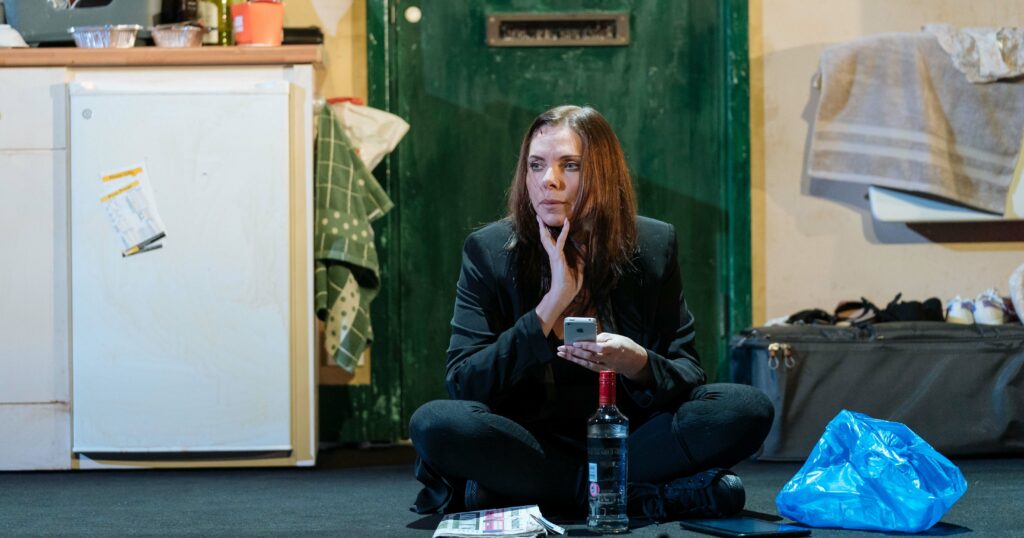 Adapted for stage by Rachel Wagstaff  and Duncan Abel,  Paula Hawkins’  psychological thriller of 2015 and DreamWorks’ film the following year of the same name, The Girl on the Train has arrived at The Theatre Royal, Brighton as part of its UK tour.

The first thing to mention and anyone who has read the book or seen the film will want to know is how are they going to create being on the train? Well simple but effective the set by James Cotterill, produces the desired effect brilliantly with projected images, theatre smoke and sound effects. The whole set fits well into the theatre considering it is effectively set in three rooms and a train.

The story is primarily about Rachel Watson, dazzlingly played by well-known EastEnders actress Samantha Womack, an alcoholic divorcee who is the girl on the train, who watches others on her commute imagining what is happening in their outwardly facing prosperous and happy lives. Particularly of interest for Rachel, is the area on the tracks where the train sometimes stops, which just happens to be where her ex-husband, Tom Watson (Adam Jackson-Smith of Casualty and Hollyoaks) and his new wife, Anna played by Lowenna Melrose live. A few doors up, she regularly sees a girl, Megan, (Kirsty Oswald) for just a few glancing seconds and this is where the story becomes intertwined with Rachel’s memory and imagination. As news of Megan’s disappearance is made known, Rachel feels compelled to get involved and meets not only Megan’s husband played by Oliver Farnworth (Coronation Streets Andy Carver) but also her therapist Naeem (Kamal Abdic).

The story becomes darker, as ingeniously does Megan’s dress, and no spoilers here just to say the supporting cast of John Dougall as D.I. Gaskill does add humour to an otherwise  tense who dunnit.

Whether you know the story or not, The Girl on the Train is well worth seeing for its theatrical adaption, excellent production and superb acting from all involved. It is currently showing at The Theatre Royal, Brighton, between 17- 22nd June before it continues its journey across the country and the West End.