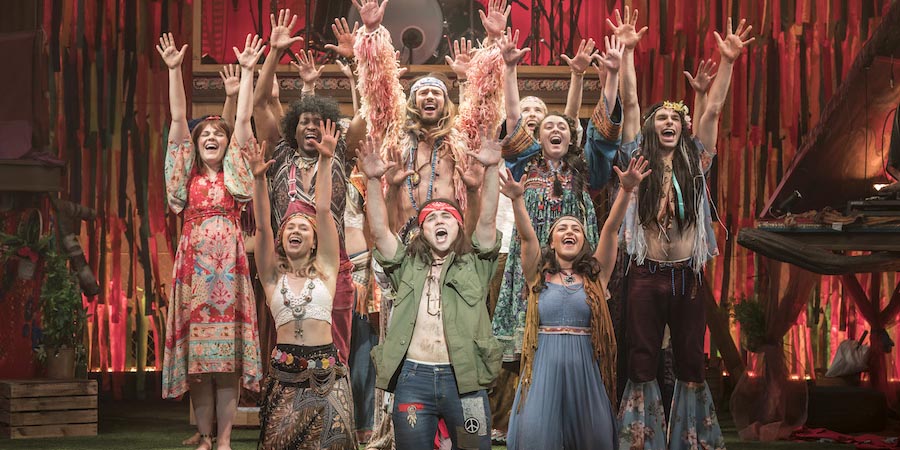 From the opening joyful colourful scene, the audience is transported back in time to 1967 to the USA hippie movement and welcomed to the ‘Age of Aquarius’. In the midst of the backdrop of the Vietnam war, the show focuses on HAIR’s hippie commune with its ‘tribe’ youngsters in the East Village of New York who are yearning to change the world, rejecting the mainstream culture of their parents’ generation, questioning the authorities and trying to find life’s meaning. Wild, colourful, outrageously free, drug fuelled and sexually liberated, they are united in protest, love and song.

This touring version celebrates the 50th anniversary of the original Rado and Ragni show and its musical production somehow makes the show feel more modern. It’s amazing to think that this show fell foul of theatre censorship rules here in the UK until they were repealed in 1968 when it opened in the West End and ran for over 2000 performances. Now, this revival is the Winner of the 2018 WhatsOnStage Award. This exuberant production of the legendary rock musical HAIR bursts in full psychedelic glory and leaves audiences brimming with smiles and warmth .

Whilst there is no real story to focus on during the show so at times it can seem a bit disjointed, all the cast are exuberant in their performances and their singing and the on-stage atmosphere they create is nothing less than fantastic. Starring Dancing on Ice Winner Jake Quickenden playing an upbeat commune leader called Berger, Daisy Wood-Davis(Hollyoaks/ Dreamboats & Petticoats) as a mesmerising Sheila and Marcus Collins (X-Factor Finalist/ Kinky Boots)who is totally outrageous as Hud. In all fairness, there is not a weak link at all in all the cast who deliver such excellent vocals and huge infectious enthusiasm. An audience standing ovation was worthy at the end of the reprise.

Adored for its Grammy® award-winning score featuring iconic hits such as ‘Aquarius’, ‘Let the Sunshine In’, ‘I Got Life’ and ‘Good Morning Starshine’, it’s great to relive the infectious songs of HAIR and celebrate how this important period in time helped evolve the freedom we experience today.

Come join the tribe and relive the summer of love and freedom to express yourself.