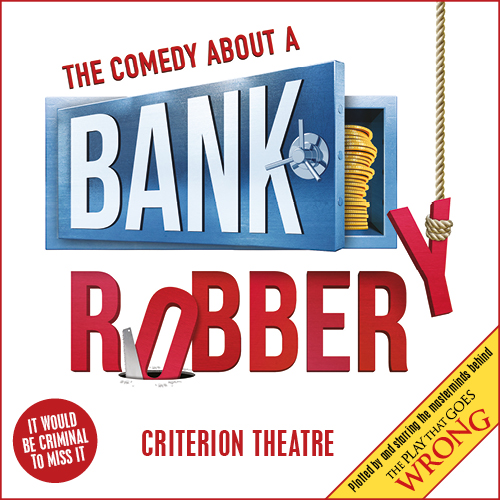 The Comedy about a Bank Robbery | Criterion Theatre | Review 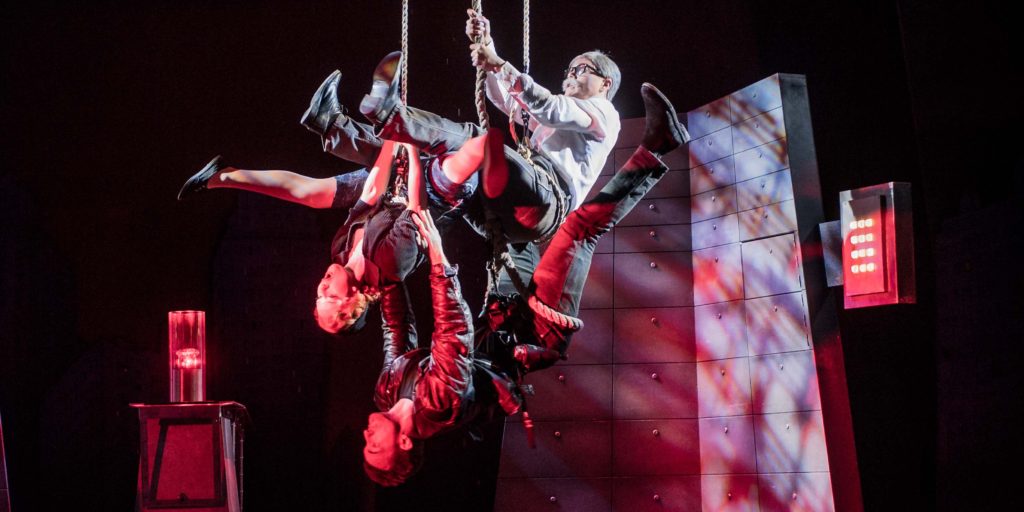 The Comedy about a Bank Robbery

Having wept with laughter during A Play That Goes Wrong yet only been mildly amused by Peter Pan Goes Wrong (albeit the TV version), I considered that the concept of the accident-prone amateur dramatic society couldn’t be strung out any further so was relieved to hear that Mischief Theatre’s third comedy would be about…well…it’s all in the name.

Written by Henry Lewis, Jonathan Sayer and Henry Shields, The Comedy about a Bank Robbery takes the form of a traditional farce with fast-moving changes, corny jokes and mistaken identities, it even has the farcical bedroom scene with an unsuspecting lover hiding in ridiculous places. Added to this it maintains plenty of Mischief Theatre’s laugh-out-loud physical comedy and irresistible idiosyncrasy guaranteeing to charm any audience.

The Comedy about a Bank Robbery tells the story of escaped prisoner Mitch Ruscuitti (Matt Hunt) planning to rob the Minnesota City Bank with the help of his prison officer accomplice (Samson Ajewole), flirty girlfriend Caprice (Holly Sumpton, making her professional debut), and a local petty thief Sam Monaghan (Sam Fogell). Trouble is, as Sam’s Mother says ‘Everyone in this town is a crook’ so things are not quite that simple.

The bank is run by Caprice’s father Robin Freeboys – cue more than a few jokes about his name (played by Leonard Cook) and his trusty bank clerks Warren (Peter McGovern) who has an unrequited crush on Caprice and Mrs Monaghan (Jenna Augen) who falls for FBI agent Randal Shuck (Jack Baldwin). Literally every other character, and there are quite a few, are all played by Chris Leask whose quick changes had the audiences in stitches and the scene where he plays three characters simultaneously is genius.

Mark Bell’s direction is slick and fast-paced and David Farley’s set design looks flimsy but proves to be both versatile and robust as creative scene changes take place. Once the scene is set in the first act the physical comedy delightfully takes over in the second. Highlights include a marvellous scene that simulates looking down into the bank from the ceiling air vents and another when the villains literally drop into the bank vault, both scenes that I shall remember for a long time.

There are plenty of reasons to roar with laughter during The Comedy about a Bank Robbery, nobody does physical theatre like Mischief Theatre, unfortunately, a few of the jokes are too long and laboured, which slows the pace, Nevertheless, The Comedy about a Bank Robbery is definitely worth a watch and the beautiful Criterion Theatre recently been given an uplift is delightfully convenient to visit.

The enthusiastic audience sang a happy birthday to the company to mark their second birthday, and what better way to celebrate the occasion is to extend in the West End for another year. Tickets are now available until April 2019.