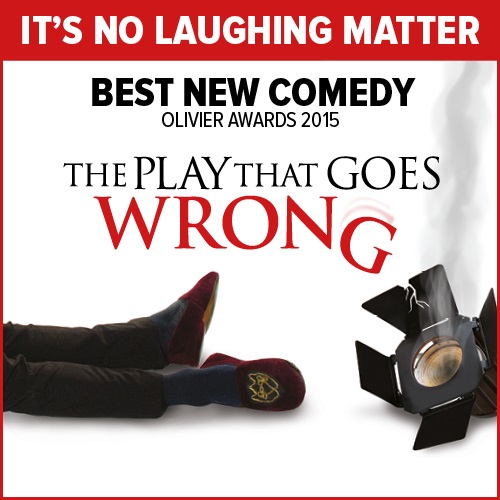 Devonshire Park Theatre, Eastbourne until 13 May and then continues on tour.

The Play That Goes Wrong | Review

The Play that goes Wrong opened at The Duchess Theatre in London in 2014 to rapturous five-star reviews, multiple awards for best new comedy including the coveted Olivier and audience acclaim. Since then it has packed houses, gone global with productions opening on Broadway and in Australia and now it delights audiences up and down the UK as it goes on a nationwide tour.

What makes this production so popular? I had been waiting to see Mischief Theatre’s production for a long time, I wanted to take my whole family and as with most families, the timing was never right for a jaunt into London so I was thrilled when the production made a stop at The Devonshire Park Theatre in Eastbourne.

It was worth waiting for, this farcical funny fabulous show had my whole family in stitches from the second it starts (spoiler: be seated before the start time). Chris Bean, the newly elected head of the Cornley Polytechnic Drama Society steps onto the stage and introduces the play, Murder at Havisham Manor. He describes the society’s previous productions and admits that they haven’t gone smoothly but despite this and despite the title of the production we are still not prepared for how MUCH can go wrong.

The plot of ‘Murder at Haversham Manor’ is almost superfluous as the the gags, slapstick humour, physical comedy and mishaps carry the show. The audience howl with laughter and gasp with surprise at the cast’s relentless antics. There are missed cues, mistakes, scenery failures, misplaced props, everything that could go wrong does, and more. The cast work with such precision and impecable timing that even though you know all the gaffs are deliberate you are astounded how clever and how many they are.

The unsung heroes of all theatrical productions, stage hands and sound engineers usually help everything run smoothly but unsuprisingly during Murder at Havisham Manor the drama society’s ‘crew’ manage to create even more chaos if that were possible.

The Play That Goes Wrong is being performed at the Devonshire Park Theatre, Eastbourne until 13 May and then continues on tour to Exeter, Leedds, Lllandudno, Salford Quays, Norwich, Birmingham, Dublin, Nottingha, Southampton, Malvern, Plymouth, and Canterbury.

2 thoughts on “The Play That Goes Wrong | Tour | Review”