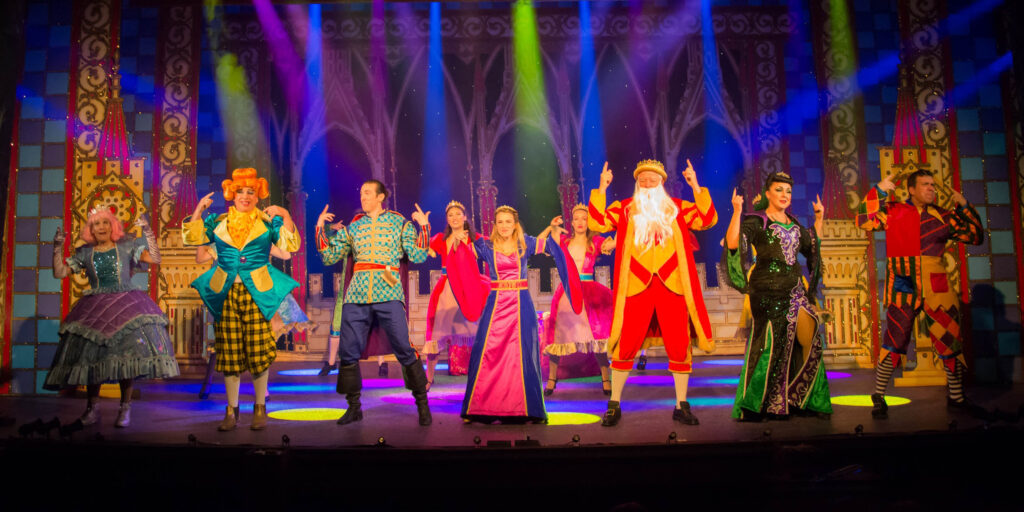 Forgoing pantomime season last year was a crushing blow for regional theatres up and down the country. Not only did they miss out on bucketloads of Christmas cheer but for many theatres this rather strange British tradition provides a considerable amount of their annual revenue.

For months, scripts have been written, costumes created, scenery sourced and actors cast with the confidence that vaccine rollout and falling cases may give theatres the boost they desperately need. Then along came Omicron.

With theatres closing up and down the country due to Covid outbreaks, there is the growing feeling that every performance that goes ahead is a true privilege to attend, therefore it was lovely to head to the Devonshire Park Theatre for a night of festivities at their 20th pantomime Sleeping Beauty.

Sleeping Beauty is an in-house production written and directed by Chris Jordan, it doesn’t have the budget or indeed the bells and whistles of pantomimes produced by the big guns like Qdos and Evolution. However, this should not deter people from going. Not only does the Devonshire Park have a small friendly feel, perfect for a family show but the company have taken measures to prevent Covid spread. This year there is no mixing between front of house and backstage personnel, no juvenile chorus and the cast reduced to 7 principals and 6 ensemble.

Local legends Tucker and Martyn Knight return to Eastbourne’s panto for the umpteenth time, this time as Chester the Jester and Dame Nurse Nellie respectively. There is a welcoming round of applause as they appear on stage and throughout the show they provide the usual ‘local’ jokes, Dad jokes, slapstick humour and a dozen or so Covid jokes that the audience lap up. There wasn’t an innuendo made, it was all good clean family fun.

Becky Hoyle (Sleeping Beauty) and Ashley Emerson (Prince Valiant) are the romantic leads, often superfluous as far as panto goes but in Eastbourne’s version, they have their fair share of time on stage, crooning, romanticising and taking part in the funniest ‘dream sequence’ I have seen in a long time.

Other characters are played by Nicholas Pound (King Clarence) and Karen Mann playing a trumpet playing, narcoleptic Fairy Forty Winks. Top musical numbers came from Carli Norris as the evil Carabosse whose performance was so enjoyable that at one point the audience forgot to boo and began to clap instead.

What a thrill to hear live music rather than piped orchestrations. The 5 piece band plays in typical panto style mixing upbeat chart toppers as well as popular musical theatre classics. There were some fantastic mash ups – I particularly enjoyed Uptown Funk mashed with The Last Midnight (sung by Norris), a nod to the recently departed Stephen Sondheim.

All in all, Sleeping Beauty at the Devonshire Park Theatre is a lovely, inoffensive, night of fun and laughter. It is running (all being well) until 9th January so there is plenty of time to mask up, get lateral flowed and head over there.