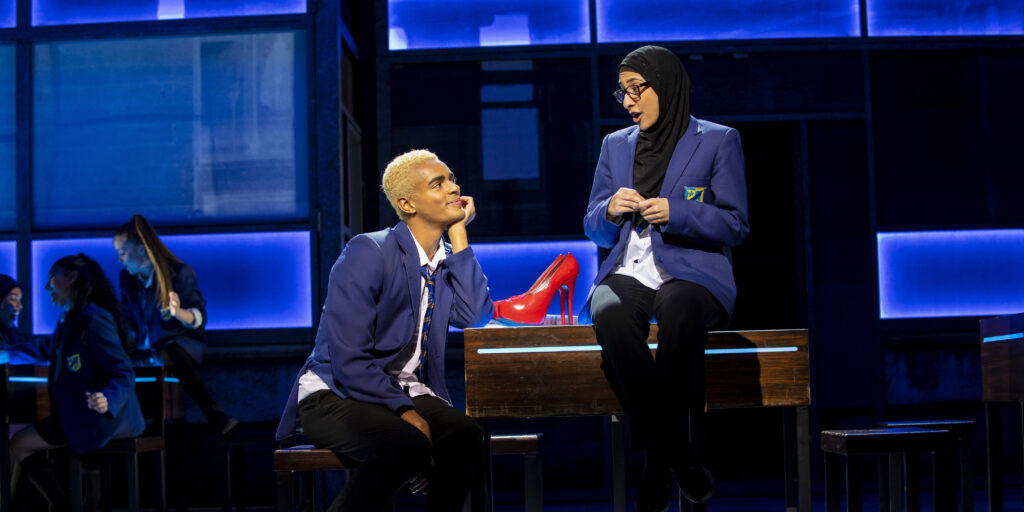 When I last saw Everybody’s talking about Jamie, I had had an horrendous day (one you still remember years later) and for once, I wasn’t in the mood for theatre! Jamie was well established in the West End by then and its exuberance and freshness was the distraction and lift I so desperately needed. The memory of how it made me feel is palpable.

Originally conceived from a documentary (Drag Queen at 16), the multi award winning show has spiralled into one of Musical Theatre’s success stories. From first commission to West End opening was a lightning 3 years, it is running in Japan with more international dates on the horizon and there is a film adaptation available on Amazon Prime.

Everybody’s talking about Jamie is currently taking a break from London and touring the UK with a first rate production and cast. It is filling theatres up and down the country. Its popularity revolving around themes and characters that everyone can relate to. Family, friendships, relationships and ultimately the need to be accepted.

Layton Williams dons the high heels (and boy are they high) in this production playing Jamie the sixteen year old schoolboy who dreams of becoming a Drag Queen. He certainly does have the dreams, the style and the moves that make us smile.  He conjures up the right amount of cockiness mixed with intense vulnerability that the role requires. Jamie’s rock is his Mum Margaret, Amy Ellen Richardson pulls every heartstring and she supports her child through heartbreak and encourages him to follow his dream. Margaret’s ‘bestie’ Ray is played by Shobna Gulati who has a wealth of experience in the show having played Ray in the West End and the film adaptation.

Support for Jamie also comes from Hugo and his alter ego Loco Chanelle, this role is played by Bianca Del Rio / Roy Haylock, who is perfection as Jamie’s guide and mentor. And although they are poles apart; similar only in the fact that they are ostracized and different to their classmates, Jamie’s best friend Pritti (Sharan Phull) is Jamie’s self-confessed ‘Fag Hag’.

Others are not so helpful, creating mental or physical obstacles which hinder Jamie from realising his dream. Britain’s got talent star George Sampson plays the school bully Dean, Lara Denning his teacher and Marlon G. Day his Father.

The entire show, including the ensemble is extremely well cast ensuring that each of the characters are relatable which ultimately is what makes the show so endearing. The songs written by Dan Gillespie Sells and Tom Macrae have a mix of upbeat feel-good tunes that stick in your head and heartbreaking ballads that make you cry.

A thoroughly wonderful theatre visit, I am so glad I got to appreciate it once more.  Go see it, if you can grab a ticket.