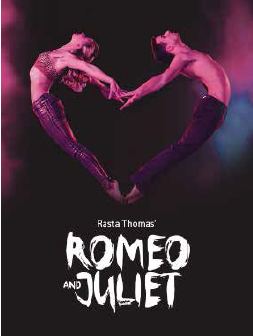 As discovered the last time I went to the ballet, I am a dance ignoramus. I know nothing about technique, and although I thought the production was beautiful I did feel I was missing something. I blithely said if I were to go to another ballet it should be a story I am more familiar with, I even quoted Romeo and Juliet as an example. Imagine my surprise when only a couple of days later I was told about a new production of Shakespeare’s romantic tragedy opening at the Peacock Theatre. This really was a case of putting my money where my mouth was and going along to check it out.

Under the umbrella of Rasta Thomas’ Bad Boys of Dance Company this version of Romeo and Juliet is choreographed by Adrienne Canterna (interview here). The classic tale has been given an uplifting shake-up by Canterna and brought into the 21st century. As a timeless classic this, of course, has been done many times before but what makes this version of Romeo and Juliet so different is the diverse mix of dance and music.

Albeit predominantly ballet, it also combines elements of other modern genres as well as adding in a dynamic fusion of dance. The music is as varied as it can get, jumping between classical to pop to hip hop effortlessly. It features not only Prokofiev and Vivaldi but also Lady Gaga, Katy Perry, JAY Z and David Guetta amongst others. The vibrancy of the music combined with a huge video screen at the back of the stage and spectacular lighting design means that the audience are not only to 1600 Verona but to modern day bars and leisure centres as well.

It sounds disjointed, and it is… but it works! As soon as you become comfortable, the scene changes and so does the music, tempo and style of dance, boredom isn’t an option!

At first, unfortunately the projections didn’t work, and the dancers performed the first two dances without them before the show was stopped and then restarted. This time the 10 characters in the production were then introduced on the screen as they entered. It was interesting to note that just by the way the dancers moved and interacted with the other characters all my assumptions were correct the first time and I had mentally put the correct character names to all the dancers without the need of on-screen prompting. The choreography was such throughout the show. The story was easy to follow throughout and beautifully portrayed.

Choreographer Adrienne Canterna danced the role of Juliet alongside Preston Swovelin as her Romeo. The star-crossed lovers didn’t need Shakespeare’s sonnets to portray their love as their dancing conveyed their passion. The explosive rivalry between the families of the Montagues and Capulets was second to none. Their powerful dancing and acrobatic flair had plenty of attitude and their combat sequences were choreographed to perfection. Ryan Carlson (Tybalt) and Jarvis McKinley (Mercutio) particularly stood out.

For me, this production was all about the dance. Although the scenes were nice to see on the big screen, occasionally they were superfluous and a couple of times the blinding lights were distracting more than enhancing. The dancing however was wonderfully emotive and a joy to watch. Moreover I loved the way that Adrienne Canterna kept the story pivotal to the production. I came away having watched an inspired retelling of Romeo and Juliet as well as seeing some remarkable dance.

I thoroughly enjoyed Romeo and Juliet. If you love ballet or, like me, know absolutely nothing at all about dance, I would recommend that this version of Romeo and Juliet is definitely one to go and watch. The story is concise, the dancing exciting, dynamic and is thoroughly spectacular to watch. 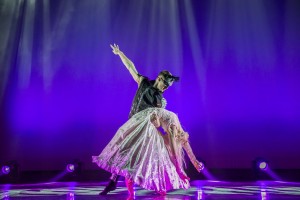