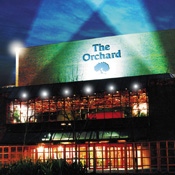 Dartford Amateur Operatic and Dramatic Society presents Oliver! Oliver! Is one of the most beloved British musicals, vividly bringing to life Dickens’ timeless characters with its ever-popular story of the boy who asked for more. With a cast and orchestra of over 100, the sensational score is full of Lionel Bart’s irresistible songs including Food Glorious Food, Consider Yourself, You’ve Got to Pick-a-Pocket or Two, I’d Do Anything, Oom Pah Pah, As Long As He Needs Me and many more on Wednesday 10 – Saturday 13 April.

Jackson Live in Concert, presented by Sweeney Entertainments, brings the hugely talented ‘CJ’ to Dartford on Sunday 14 April recreating the Michael Jackson experience with his stunning rendition of all his favourite songs. Michael Jackson is not only remembered as one of the most influential artists of all time, but many of today’s artists have been inspired by his iconic style. His career spanned nearly five decades of music, and he was continually at the forefront of popular music.

On Monday 15 April back by ever-growing popular demand, get ready to party as the UK’s favourite Rock & Roll variety production returns with another chance to see its latest most popular show! Featuring incredible live music performances, this hugely entertaining Rock & Roll spectacular blends classic gold hits from the 50s, 60s & 70s, with bags of hilarious comedy! Celebrating an entire era of timeless nostalgia, the production is well known for its ability to make audiences return time and time again for a new experience. Now in its 33rd year of consecutive touring of national touring, That’ll Be The Day is living proof that Rock & Roll will never die!

Singalonga Productions, producers of Singalonga Sound of Music and Singalonga Grease brings you their newest show, the smash hit film musical that everyone can’t stop singing – The Greatest Showman! Cheer on Hugh Jackman, lust after Zach Efron and hiss Rebecca Ferguson (…or maybe not) as you experience The Greatest Showman in the greatest way possible – with lyrics on the screen so you can join in as loud and proud as you want. TUE 16 APRIL

Brand new In the Night Garden Live show coming to The Orchard Theatre on from Thursday 18 – Monday 22 April, Igglepiggle, Upsy Daisy, Makka Pakka and friends are back in their brand new live show Igglepiggle’s Busy Day! Join Igglepiggle as he looks for his friends in the Night Garden by following their funny sounds until he finds them all!

Join us to celebrate the incredible 35-year career of the best-selling female artist of all time The Ultimate Madonna Tribute. This dazzling and colourful production features all of Madonna’s greatest hits such as Holiday, Like a Prayer, Papa Don’t Preach, Material Girl, Vogue, Music, Hung Up and many, many more! TUE 23 APRIL

The The Syd Lawrence Orchestra is back for 2019 and their explosive new show is better than ever! Hold on tight as Big Band Spectacular takes you on an exciting journey that is stunning, dynamic, and thrilling. Directed by Chris Dean, this mesmerizing performance is packed with your Big Band Favourites. Featuring the music of Glenn Miller, Count Basie, Tommy Dorsey, Neal Hefti, Billy May, Frank Sinatra, Ella Fitzgerald and many more. This is definitely a musical extravaganza you won’t want to miss. WED 24 APRIL

This extraordinary band, dubbed the Definitive Pink Floyd Experience, are renowned for their stunning celebration of the music of one of the world’s greatest bands. 2019 celebrates the 40th anniversary of The Wall, one of the best selling albums of all time and the brand new show will feature the complete album as well as the whole range of classic Pink Floyd from the Dark Side of the Moon, Wish You Were Here and much more. THU 25 APRIL

Every week, more than a million people tune in to BBC Radio 2 to hear Tony Blackburn wax lyrical about the biggest stars of the 60s – With stories and songs from this most loved decade, come along and spend the evening with Tony, as he brings Sounds Of The 60s from the studio to the stage! SAT 27 APRIL

As the only gay, Aspergic,  quarter-Welsh comic on the British comedy circuit,  Britain’s Got Talent has helped to highlight Robert’s distinctive comedy genius.  Known for his brilliant timing and anarchic performance style, Robert’s chaotic stage presence, improvisational skills and delivery saw him win the Malcolm Hardee Award for Comic Originality.  A regular at the Edinburgh Festival Fringe since 2010, his shows regularly impress critics and audiences alike, winning the hearts of the British public.  His hilarious routines have also received over 6 million views on YouTube winning him legions of fans across the UK and beyond. SUN 28 APRIL

Following its sold-out smash hit debut tour, Seven Drunken Nights – The Story of The Dubliners returns to theatres in 2019 with an even bigger production. Direct from the West End, the show brings to life the music of Ireland’s favorite sons ‘The Dubliners’. Telling the story of a career spanning 50 years and evoking the spirit of Ronnie Drew, Luke Kelly, Barney McKenna, Jim McCann, Ciaran Bourke and John Sheahan. This talented cast of musicians and singers bring the music of this iconic group to life. TUE 30 APRIL

Pre-show dining is also available before the show. The Orchard Theatre’s Restaurant provides a delicious range of, unique and memorable dishes, using the freshest local produce and prepared daily by the Head Chef.  Reserve your table when booking your show tickets. To book tickets or for more information visit orchardtheatre.co.uk or call the Ticket Office on 01322 220000.