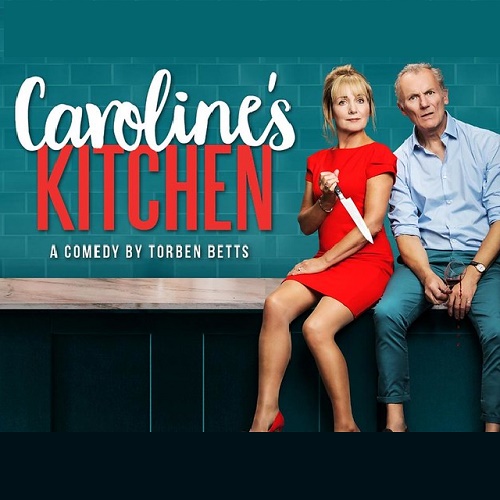 Caroline Mortimer is the Nation’s favourite TV cook and in the glare of the spotlights it seems as though she has the perfect life but as we are aware the fake facades often presented on screen can dissolve once the roll of the cameras stop. I can remember how devastated I was to learn that Nigella’s perfect kitchen where she cooked and entertained her fabulous friends was in fact a studio in Elstree !

And so the scene is set for Torben Betts’ new comedy brought to the stage by the Original Theatre Company to unravel the complexities of life in the 21st century and to ask the question can we really ever “Have It All” without selling our souls?

Caroline Mortimer the star of the show resorts to alcohol to blank out her problems and is played enthusiastically by Caroline Langrishe, a familiar actress from her tv and film roles. The first act of the play, albeit rather frantically delivered, sets the scene for the secrets she is trying to keep from her husband, former banker Mike, who is an opinionated, frustrated, golf-playing retiree worried about his own ageing and mortality exuberantly played by Aden Gillett . The other cast members all have their own secrets and problems and lead a very fragile existence pivoting around the couple,

The plays tackles affluence, infidelity, sexuality, metal health and the need to put on a façade for the world to see. The set is fantastic with the entire play based in the kitchen of their wonderful North London home, which is on the market so that they can downsize to buy their high-achieving, broken-hearted son a flat in London and retire to the idyllic South West of England.

Direct from its London run the play is touring the UK before its transfer to New York. It offers a sharp observation of the realities of life these days with comedic and tragic moments all served up at a fast pace with no room to breathe !!

Caroline’s Kitchen is playing at the Connaught Theatre, Worthing until the 6th April. Book Tickets here